MxM Lots of plots to choose from... 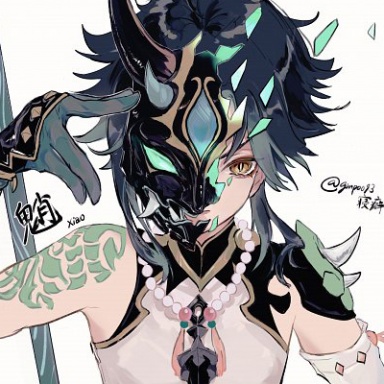 Looking for a very chill (2-5 paragraphs) MxM roleplay that is more fixated on character development and plot rather than right-off-the-bat smut (unless the plot calls for it). I’m into all kinds of themes and genres aside from those set in the 16-1900s and such. I just fail at them so unless you want some inaccuracies thrown into the mix, then I strongly suggest staying clear of those time periods lol Side note: If you prefer using pictures, I only use anime and ulzzangs (Korean models) as face-claims. I also don't subject my characters to labels such as: dominate, submissive, seme, seke, uke and the like. PM me if you want to plot something out ^^
Anywho, let’s get down to business (to defeat the huns) –yup my Mulan reference is HAI-LARIOUS xD-

Note: Please feel free to suggest your own AU plots since I’m good with anything
MCHANZO
The most unlikely of high school sweethearts resided between a japanese foreign exchange student and a delinquent with a southern accent. They knew what they shared wasn’t going to last forever, but when Hanzo returned to his native land, McCree decided to follow after him as soon as he was physically, psychologically and financially stable to do so. But little did McCree know that his soulmate was the notorious ‘Dragon Lord’ of Hanamura who decided family took precedence over the love of his life.
Hanzo x Genji
Hanzo was so concentrated on upholding his position as the next 'heir' of the shimada family that he had completely disregarded his wayward brother's behavior. He didn't have time to pay attention to him or direct him to the path he was destined to take until it was too late. Genji's refusal to take on the responsibilities the shimada name entailed gave his brother no choice but to kill him. However, striken with remorse and regret, he finds a way to ‘make a deal with the devil’ and request for a second chance. So, with his memories fully in tact, he wakes up the next day to find out he’s young again with the ability to right his wrongs in the hopes he can rule the shimada empire with his brother by his side.

» ◇ » (A) is interested in a girl who loves anime, especially all things Yaoi, but he knows nothing about it - that’s where (B) comes in to teach him a thing or two about the fudanshi/fujoshi world.
» ◇ » (A) was a military brat who wanted nothing more but to join a military academy in order to live his life serving his country. In contrast, (B) was a musician and aspired to attend the best music school in the country. (B) got his dream, but unfortunately for him (A) ends up being his roommate.
» ◇ » (A) found (B) on the shorelines near his oceanfront home unconscious and bleeding profusely on the brink of death. (A) was a surgeon, he could fix the physical damage, but not the mental one that left (B) without a single memory of his past.
» ◇ » (A) was so drunk one night that (B), a complete stranger, had no choice but to take care of him. Comes to find out, (A) is not only engaged to (B)'s ex, but (B) is their wedding planner.

» ◇ KRP / DATING-SIMS / GAME CHARACTER X GAMER ◇ »
A man who loved action games ranging from first-person-shooters to MMOs had thought to broaden his 'horizons' by trying out a 'dating Sims' game upon his best-friend's request. He knew he was getting himself into something that was out of his comfort zone, but never did he ever thought he'd wake up with a man in his bed, especially if that man looked and sounded like the character from his game. All he wants to do is send him back to the virtual world where he belongs, but how is that possible when this mystery man claims he can't leave until his 'mission' is complete

» ◇ CROSS-DRESSING / GANGS / ARRANGE MARRIAGE ◇ »
Childhood friend (or rivals) caught in the middle of a turf war. In order to settle differences, both fathers agree to a marriage in order to stop the blood shed. Character A's father is unaware that Character B's father doesn't have a daughter to wed. So, to solve the problem, A comes up with a plan to dress B as a girl, to which B's father agrees just until a treaty between both parties are signed. So the plan is hatch, the date when B throws his manhood aside is set, and now two best friends must experience the most awkward moment in their lives trying to convince a world of gangsters that they're slowly, but surely, falling in love.

» ◇ EXES REUNITE ◇ »
They were destined to be with each other forever. They were high school sweethearts who decided to get an apartment together as soon as they graduated. For all anyone knew, they were on the track to become engaged until one night, one of them decided to leave in the middle of the night without saying a word. What the reason may be, it really didn't matter because they were sure they were never going to see each other again. But fate had a way of putting two together through an occupation neither can run away from.
So for this it can be between a singer x stylist/makeup artist, photography x model, manhwa artist x novelist and so on and so forth. I'm pretty much up for anything.

» ◇ BROTHER'S FIANCE / MOBILE RP / LOVE-HATE ◇ »
Character's A's brother had the habit of switching phones and abandoning it at his home whenever love took a turn for the worse. He thought nothing of it at first since they started piling up and collecting dust in the far corner of his room, hidden away in a drawer to never be seen again. But when one particular phone started beeping every hour by the hour, Character A had no choice but to read a very offensive, downright toxic text message that had him replying back without a single thought put into it.
Since majority of the time I'm away from a computer, I thought an rp format via text message/ discord/ skype would be fun. If mobile rp isn't your thing, we can easily switch this plot into a standard paragraph format or combination of the two.

» ◇ BLIND DATE / GAY X STRAIGHT / MOBILE RP ◇ »
Desperate to find love, Character A and Character B spent hours filling out an extensively detailed online questionnaire that promised to match them with their soulmate. It took a week for their results to come in and when they finally received the person that they were waiting for, never did they ever thought they'd come in contact with not only someone who seemed like the polar opposite of who they were, but also another man. Character A thought it was some sick joke and for some reason, he humored the ridiculous site by sending a message he never thought would open up a new chapter in his life.
We can even have it where one of the characters didn't know that a family member was setting them up in this service. Anyways, since majority of the time I'm away from a computer, I thought an rp format via text message/discord/Skype would be fun. we can easily switch this plot into a standard paragraph format or combination of the two.
Show hidden low quality content
You must log in or register to reply here.
Share:
Reddit Pinterest Tumblr WhatsApp Email Link
Top Bottom