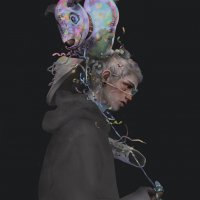 ⇨ Regarding my writing, I like to think my English is decent. Proper spelling, proper grammar. There's no doubt a mistake might pop up here and there, but that's just being human.
Since I am currently on break, posting speed is relatively fast (by Henri's standards). This means at minimum, one post per day and if I get extremely busy, five posts per week.

Post length tends to range, on average, about ~700 words, if not more. At most, I'll likely pump out 2,000 ~ 3,000 words should the post call for it. But in general, I tend to like to teeter toward the 1,000 range. I'd love it if my partner would be able to pump out meaty posts as well. Any less and I'll more than likely lose interest.

Lastly, I only ask that my partner is well-versed in the fundamental basics of English grammar and spelling.
I'd like to mention that all RPs are 18+ and that my partners be open to writing mature content.

Finally, all my RPs revolve around a MxM relationship.

In other words, I only do MxM.

⇨ Romance.
⇨⇨ Romance is a must for me. I enjoy the tears and the angst that come with it.
⇨ Dark plots.
⇨ Psychological plots.
⇨ Atypical pairings that stray from the stereotype.
⇨ Obsession.

⇨ All are original plots.


The moment that CA had laid his eyes on CB, he had fallen in love.
The thing about love was that, sometimes, it drove you crazy.
CA loved CB so much - he'd follow him just about everywhere. Until one day, he decided it wasn't enough. He wanted to have CB's eyes on him. So, he kidnapped him.
Little did he know that CB isn't quite right in the head. Before CA knows it, he's tangled up in CB's web of dark love.

Something about a twisted relationship.


CA is the third son in line for the throne. CB is his loyal servant.
It's time CA took the throne.
I planned on having this one set in a fantasy setting wherein CA and CB are demonic beings.
CA's character would mimic the appearance of a small child while holding the personality of someone who commands attention as well one who is frighteningly intelligent. At the same time, he'd play the part of a spoiled child as a means of manipulation.
CB would be a more aloof character. I imagine he would be the sort to be "loyal to the death" and would do anything CA would ask of him. Think of him as a silent dog.
The basic run-of-the-mill twincest story but with a small twist.
CA and CB are twins, and they've been known to share just about everything with each other - even relationships. This is where CC comes in.


Somewhere beneath the heat of summer, a vacationing boy at the beach encounters a merman.

edited - rps are MxM only.

edited - "twins" has been taken.