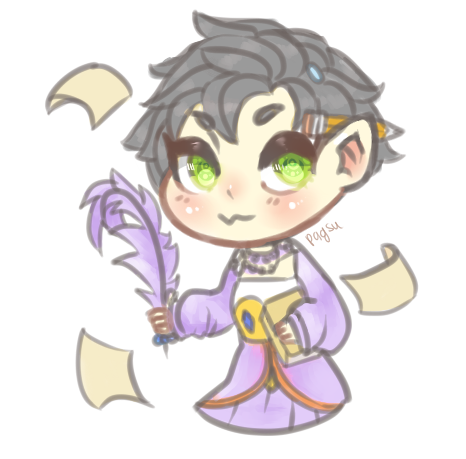 HIT ME BITCHES
Hey! I'm Moody. I'm twenty-nine years old, and pretty much have a reputation as one of the more messed up people on the site. Today I come to you with a singular idea that has niggled at my mind for the past few days, yearning for sweet, sweet release.

First and foremost, this idea is based on K exiting Hell into a world that is not his own. Please bring your own settings for him to play in!​

Be warned, I only really have planned my character and the start, so when you come to say hello, please don't hesitate to bring along a few ideas on where to go from there! This will mostly be a hurt/comfort RP, and the start is likely to have several short timeskips as my character fades in and out of consciousness due to his injuries.

So, without further ado, my character is to the left, and you can click the image for more information about him. He uses masculine pronouns, but has a female body. He does not identify as either gender, and finds the concept strange and unappealing—equally as much as he finds the concept of having sex. On that topic, I am not averse to, nor do I require, sex inclusion, but be aware that any sex that involves K will not be entirely consensual, as he is the oblivious type and will not realize on his own what is happening until later.

My partner's character does not have to be anything specific, though I strongly prefer if they contrast in one or more ways with K. A few types of contrast I enjoy include, but are not limited to, size, age (preferably bring older characters), rank, and socioeconomic position.

As far as my partner goes, I most enjoy partners who fall in the adept, advanced, or prestige ratings on the site. I like to have at least eight sentences to work with, too—with no upper limit. For requirements, I need all posts to be in third person and in past tense, please.​
Starting Post
K stared at the King of Hell for several long moments, and then turned. He had his answer, but... he didn't like it.

"Where do you think you're going, plaything?" the King asked, and K glanced back.

"After coming this far in? Surely you noticed that nobody stopped you from coming this far... Even that demon? Didi, you called her? She led you here. Come on, you're a smart human." The king's grin spread wide, revealing vaporous black teeth with wicked barbs. "Why would that be?"

K spotted the barbs, and his eyes shot wide. He wasn't stopped because they wanted him there, going ever-deeper. Everything in Hell was to punish sinners, and what act could be more prideful than entering Hell on purpose? Going deep into it, as deep as it went?

The moment it clicked, his feet slammed the polished black floor as laughter echoed behind him. Shadowy spears narrowly missed him as he fled, gripping the straps of his backpack as he exited, then slammed the door.

He panted against the door, and slowly, the stone-like guards turned to look at him, their bodies tinkling as the dark stones moved. They stared at K, and he stared back with wide eyes.

The quiet lasted only a beat before a dark aura pulsed from them.

K gritted his teeth as they began to approach, the titanic beings no longer sounding like chimes, but a cacophony that burned into K's ears.

Past them, he saw Didi, staring at him with wide, confused eyes, one hand over her mouth. Horned, bald, and clad in business attire, the pure black demon wasn't very bright, but she waved to K regardless.

He ducked to one side as a guard launched a slow-moving attack at him, and K scrambled as his hands hit the black stone of hell's floor. He launched himself forward, toward Didi, expecting her to help him.

Instead, that peaceful face he'd come to trust morphed into wicked joy as a grin grew, and her claws also.

Even in heels, she was fast, but K saw her coming in time.

She cut his clothing, but he didn't stop to look back.

If anything drew his blood, anything at all, he would never emerge from Hell.

Every level brought its own struggle. Heat. Cold. Guards. Demons.

Only at the first ring did he have chance to pause as he escaped the sight of the first ring's guardians. He pressed himself in a nook of the great red-stone spires and let the dust of Hell itself disguise him, even as it irritated his skin.

Moments became minutes became hours, and the sounds of the guards faded from cacophony to gentle tinkling, and then began to grow distant at last.

His shoulders slowly sagged, until he heard something else. Not the winds or the wailings, but a distinct voice.

K opened his eyes, then uncovered his mouth as he nodded, slow, and then more rapidly.

The man. They met before. K remembered him by his hair: a short ponytail with shaved sides.

"What happened to Marshall?" the man asked, and K began to hunch.

"Dunno," he managed, his voice choked by his own stress as he looked away.

"Shit, guy like him, probably got himself killed." The man sighed. "Listen, come on, I told you I'd talk to the others, they'd come around. You can come back to camp! They won't kick you out again, I promise." He smiled and offered his hand to K.

Slowly, K looked at the hand, and then up, only to spot a spiked growth in the man's chest. Red began to grow, soaking into the shirt, and the man's face as K looked up at it for the first time showed clear surprise.

"Oh," the man said. His last word before his body was ripped back and away from K, then set upon by the first ring's demons: quadrupedal creatures a bit larger than house cats. Spiked tails and bony bodies covered in ridges gave them an evil look, but their four-inch claws only cemented the look.

K turned. He close his eyes. He ran.

He ran until he slammed into and through something. It sent a ripple through him.

Suddenly, his body ached. His lungs burned. His skin screamed agony, and he gasped in his first breath since he entered the gate into Hell.

His legs lost their energy all at once, and he made it only a few more steps before he collapsed against something hard. He opened his eyes to see a long wooden bench, and lifted his arms to catch it, to hold himself from falling entirely.

K panted as sweat and tears began to form and drip, carving streaks through the dust that covered his sunburnt face.

So silent. He heard his every ragged breath, heard his own pulse, heard the quiet sound of his palms squeaking against the wood he gripped, and even the brush of his layered clothing.

Bile rose in his throat, and then spewed forth. Chunks of a meal long forgotten spewed onto the floor. Dazed eyes looked around, blury and unfocused, before he shuddered and crawled weakly onto the bench. A sob escaped, and then another.

A passage came to mind from his old research.

But, knoweth this well, travelers into Hell! Should thee enter with injuries on thy person, and thee survive to leaveth its horrors in thy past, those injuries thou has't entered with wilt thrice strengthen as Hell attempts to taketh back what hath hath departed from it.

Maybe... he should have waited until he recovered...