Original poster
The March of 1000 Yokai
- - It is said there in a legend, that it takes 1000 Yokai to breech the Gates of the Afterlife, and within it bring about an Era of Hell on Earth with the King or Queen Yokai to Rule it. - -

At some point, somewhere and sometime in your life, you wanted something, and in this 'Need' a Sin was born. Through this sin you were marked and through this Mark you will be changed. You were human before, but now a deal has been struck. You don't know how this really happened, but sure enough as soon as you made the deal, the devil made with the details. You should have realized a crafty Fox when you saw one, but no - in your lust to make your desires your own - you have suddenly made a Pact with the worst Yokai in all of Japan and now your body is a changing! What's worse is this Kitsune apparently has control of you now at least in part, and demands you walk in her March of 1000 Yokai! What will you do? What in the hell are you turning into? And all these crazy powers too! How will you learn to control what the sin in you has created? Was it really worth it? Will you try to keep on with your normal life? Inconvenienced ALOT by the Kitsune who did this to you, or will you fall out of society and join her in terrorizing all of japan?

: SUMMARY :
The Plot of this role - play is simple. You have at this time 2 big badass Yokai terrorizing Modern Day Osaka City, Japan, and at one point your character didn't know about this shadow war going on in the background. But That All Changed, the day you Wished for something with all your heart. That was when She showed up and changed your character Forever. They either turned slowly or swiftly but they are now a Yokai. And you can either try to go about your life terrorized by 'Her Mistress' or work for her and battle a bunch of other demons all in the hopes of once day gaining the 1000 Yokai needed to breech the gates of the afterlife and bring about the Era of Demons on Earth. You also have the option of playing as a human who hasn't yet Met the Kitsune, you may even fight her off for a while but eventually she (or later on perhaps another Big Bad Yokai) will gain your Souls Debt also called the Soul Tab (like getting the check for a meal lol) and now you are in part controlled (able to be summoned) to 'Her Mistress'. Also note that for right now we will mostly be fighting other NPC Yokai though you are allowed to make up to 2 characters.​


PLEASE SEE RULES BEFORE JOINING THANKS IN ADVANCE!
THEY AREN'T LONG AND ARE EASY TO FOLLOW!
MEMBER COUNT AS OF SEPT:26:15 || 10​


ARC 1
IC - 1 : Opening of the Seishin Hikari Temple?!?
-- The citizens of Osaka continue about their lives as one day in fall suddenly a Shrine that was little more than a run down shack one day, over night has turned into a Brilliant Shiny and Prosperous Temple! Fully staffed to! What is more strange is if you ask anyone they'll say "The Temple has Always been there didn't cha know that?" What's more there is a festival being rumored to come soon to the temple to officially celebrate the arrival of their newest Head Priestess, lady Kasaisoru Seishin-Hikari - niece of local millionaire Kaza Noruyama, has taken her position at the young age of 17? HA! Little do the people of Osaka realize for the first time in centuries a Troupe of Yokai have come to settle in their prosperous city. Let the Games Begin! --​
: RULES REAL QUICK : ​
THE REGULAR SHIT APPLIES, PLEASE POST COHERENT (LEGIBLE POSTS) PLEASE BE ACTIVE! POST OFTEN POST HAPPY! YOU KNOW THIS SHIT DON'T MAKE ME HAVE TO REPORT YOU THANKS! In Short I'm pretty laid back just don't MOD/GOD/SPAM/MARY SUE etc you know them come on kids lets make this fun and easy shall we?

x. Two character Max - AND only 1 Upper Class Yokai / Demon character only. However if you get bored you can always feed your character to Kasai

x. Current S Class Youkai = 1, however after we reach 10 MEMBERS ( or characters which ever may come first) I will open a spot for a second S Class Yokai.

x. You may be pretty much ANYTHING when it comes to the Yokai / Demon you turn / are turning / turned into. This is because this demon needs to reflect in some way that Wish (cough sin) you asked for that called the Yokai to find you.

x. To make this more interesting You may bond/pledge/align your characters within ANYONE in the links of the S Class. So Say Kasai (S CLass) has three underlings pledge to her and you make the 'Deal' with one of those three. Then you are technically still linked to the S class but they won't have as strong of an influence over your character.

x. NO S CLASS YOUKAI DO NOT CONTROL YOUR CHARACTERS, however simple things like forcing you to kneel when they are infuriated (if you are willingly standing before them) or calling you to their presence when in need of their Battalion.

x. Nearly All Yokai have Human form, and a True form, or can morph between the two forms and stop anywhere between. Human form is considered/called Glamor.

-- KABYT HAS THE RIGHT TO EDIT THESE RULES AT ANY TIME BUT WILL UPDATE MEMBERS BEFORE DOING SO! --

A - CLASS GENERALS: CLOSED
• Pretty Badass only other A Class Can beat them but so could a few B Class teamed together •

B - CLASS KNIGHTS: 1 Spot Left
Some what badass, but only takes a couple C Class teamed up to whip them.

C - CLASS ALIGNED SPIRITS: 2 Spots Open
Could be of use in others ways, maybe you have a special skill but yet this isn't exactly the Biggest Threat either. You may still have good fighting skills.

D - CLASS CARETAKER: 10 Spots Open
Servant Class or Worker Class meaning you work within the Shrine more than likely or are of use in some way other than slaughtering other Youkai.

F - CLASS COURIERS: Unlimited
Lowest of the Low barely even worth as servants, often times used as informants though to linger about places and pick up tid bits of news.

This thread will act as a way to keep up with shit. We'll have arc summaries for people to look at if they want to catch up and join in. THOUGH NO PRIOR KNOWLEDGE OF PLOT IS NEEDED TO JOIN!

☆ OCT:11:15 - NEW OPENING FOR AN S CLASS!! ☆
Alrighty! SO we're off to a GREAT START GUYS!! Thank you all again for joining up, staying active, and making this rp awesome! Now that we're a little further into the thick of how this rp unfolding i will be opening a Spot for a RIVAL FAMILY CLAN S CLASS! This S Class spot will go to the BEST APPLICATION SENT INTO THE KABYT'S PRIVATE MESSAGES! So obviously this demon will need to be around the same level as a Kitsune Demon to be of any danger, and may span any age range or race. Even the weakest of demons, with the write creativity thrown into their creation, could become an S Class! So if you wanna play a second character S Class and have an idea for one send it to Kabyt's PMs! Also note you will have one of my NPC Furi Yokai having been the one to tip of Kaza (Kasai's uncle) That she was about to move closer and told him she was coming for him, she wasn't but obviously that didn't matter HA ^.^ )

Alright that's all for updates for now ^.^ THANKS AGAIN ALL!


☆ SEPT:26:15 - WE'RE OFFICIALLY OPEN! ☆
We have 10 Members! And We're rolling the first In Character Thread out! So if you've joined and are approved get over there and post! If you're still working on your profile 'URRY'ET'UP WE WANT UR CHARS RABLE-GAR! And If you're new don't be scared we don't bite... much ^.~ Join us ask us questions come hang out for the hell'uv'et ... >.> no seriously join tho!
That's all for today's Updates Stay Tuned!


I WILL HAVE THE IN CHARACTER RP UP TONIGHT! ALSO GONNA GET THE SETTINGS UP! SORRY FOR THE WAIT!
Reactions: adabotcon
K

Original poster
HEY GUYS! Sorry I didn't get finished with everything tonight! -yawns- BUT luckily tomorrow is friday also to tide you over and to get some creative ideas going check out the beginning of our settings page. It still has much to be done to it but its a start at least.

Also I still haven't finished my own character sheet but TOMORROW LOOK FOR THE ROLE - PLAY TO START! As soon as I get home I will fill in the most important information on the settings and add the ideas you pitch, then I will finish my CS and post the beginning of the role - play !!!

Original poster
@Verdigras, characters can only have 3 abilities, yet yours has 5...
Reactions: 2 people
K

In the rules, it says we can have only 3 abilities, right?
K

Original poster
Yeah i see the problem now. I have PMd to get edits made
K

Original poster
OH also ^.^ Should we start somewhere in the city or at the shrine?
A

Original poster
I say, the shrine, since it would be easier for us to all interact with each other at first and develop some kind of plot.
Last edited by a moderator: Sep 25, 2015
Reactions: adabotcon
K

Original poster
Alright guys I have been working on things on my computer and now i have a migraine- face+desk- I will get hte iN Character role = play started in the morning and have my profile up too sorry guys for the delays. 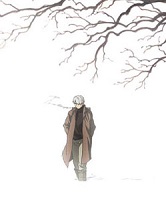 Original poster
Yeah i have chronic tension migraines they are no fun at all.
V

Original poster
@Axel Rover
Thank you for the heads up! I am in the process of editing it as of the moment.

Original poster
ALRIGHTY! I am online and i have taking like 3 BC powders! Migraine is D.E.D. MWAHAHAHAHHA Alrighty finishing up my character sheet then getting to work on finishing up the in character ^.~ GET READY~


Also @Zell and @macaron let me know when your profiles are ready for review ^.^

Also @Rikisya Can't wait to see your Profile and thanks again for joining us!! the Sign Up and Character Sheet's are found HERE!

Original poster
Alright i'm Prettty much done with my profile o.O; I have a few more things to add into it but for the most part you will get her now lol. Alrighty starting on the first IC POST!!! WEEEE
K

Original poster
@Rikisya approved ^.^ Welcome Aboard! Will add you to the Heirarchy soon !!
K

Original poster
Hey all! I have the IC thread made and I am working swiftly on the first entrance post ^.^ please be sure to read the lil IC RULES at the top in the first post before attempting to start thanks ^.^ I should have this post up in about thirty minutes tops me thinks BWAHAHAH
K

I'ma work on my Profile a little bit more ^.^ Those of you who are approved go ahead and post whenever! If you have questions please ask them here. No OOC in the IC pwease and thanks!!!

Original poster
I saw your message after the interest check on RPN. The layout for this site is similar, but more expansive. Expect me to post a CS tomorrow.
Reactions: 1 person
Show hidden low quality content