As If Normal Were Possible IC

September 3rd was not a day Leone Valcrosse had been looking forward to. Not since he was transferred to a human school. He still had no clue as to what he'd be getting paid. And even worse, he had a horrible feeling about this year. He knew that mixing with humans was a horrible, horrible, horrible idea.

He let out an annoyed sigh as some asshole cut him off when he tried to pull in the parking lot. Like, seriously, they were both educated adults and both on time, so what was the point? How the fuck should he know. With a sigh, the daemon pulled his truck into the parking lot and slowly drove around, looking for his assigned parking spot. He found it in the very back of the lot, a scowl becoming evident on his face. He grabbed his briefcase and the enormous black leather bound book that was taking up the majority of the seat next to him. He could feel the dread prickling up his spine as he got out of the truck and locked it.

The daemon supposed that there was absolutely no turning back now. He noticed a large group of human parents gathered outside the main entrance of the school. They did not seem all that pleased with his presence... Merely adding to his discomfort. When several of them refused to move out of his way, he let out a soft sigh and uttered a spell under his breath. "Vorpous insidum."

He disappeared and reappeared inside the school. He walked with purpose into the main office, where his gaze met with the principal's. "Please remove that crowd from the front of the school. I don't want my students to feel threatened on their first day of school." His voice was cold as he spoke, his temperament well contained. With his piece said, he collected some papers from his mail box and headed off to his room.

Thankfully his words hadn't fallen upon deaf ears, as when the first busses began to pull in, there were very few parents still lingering outside the main doors.
C

Kit sat at the back of a human bus, having missed her own in her panic not to forget any of her work. She had a hoodie on, pulled up over her ears, which had quickly become something that the other kids on the bus were making fun of.
' These are what human children are like...' she thought as the bus pulled up.
Immediately the other kids swarmed to be off the bus first. Kit just sat and kept her head down waiting for the majority to disperse.
Eventually only three or four students stood by the door so, gathering her books and bag, she stood and headed down the bus, muttering a soft thank you as she got off.

She soon noticed she was the first non-human student to arrive and became uneasy, picking her way through the groups of students who were reuniting after the holidays. She held her books tightly to her chest and stared at the ground as she made her way to the doors.

Finally she was in.
She took a moment to catch her breath and calm down. The main building was fairly empty, considering how early it was, so she wondered slowly taking in her environment as she headed to the room on her time table.

Akuma Ayumi had arrived at the school in an appropriately stylish fashion for a monster - by having one of her family's subordinates open a warp gate so she could simply appear right in the middle of the school grounds. She carried no bags or books of any kind, and was dressed in traditional attire, completely neglecting any kind of school uniform that they might have going on there. She ignored the confused onlookers, and headed directly for the room of a certain Valcrosse, patiently waiting behind the person who was already there.
C

Kit smiled politely at the newcomer.
"Um... Hi. Do you know if this is the right room for..." She paused to check the timetable "Leone... Valcrosse?" she asked, shifting her books and smiling again.

"Well I imagine since we're both in the same place looking for the same person, then it probably is."
C

She nodded internally cursing the obviousness of the situation.
"aha.. Yeah, of course... I suppose your right..."

"Ouvretus porteous." Another spell fell from the daemon's mouth upon hearing the soft knock on his door. It slowly opened, revealing the daemon writing the schedule on the board, as well as his name. His wings were neatly folded against his back and his long black feline tail flicked mindlessly as he finished up his preparations.

"Thank you for arriving early. Sit anywhere you'd like, preferrably towards the front." He spoke to the two students with a small smile on his face. He studied the two young girls carefully, wondering what his classroom dynamic would be. These students would need to know that sticking together would be their best bet at surviving the school year. And by the looks of things, they didn't realize that just yet. By lunch time he was certain that they'd get it.

He waited patiently for the rest of his students to arrive. His mind wandered a bit at the thought of how other teachers would take to his presence. He was a bit worried about it, honestly. Would they be polite about his presence, or just be ignorant like the majority of the humans he'd faced throughout his lifetime.
Last edited: Sep 20, 2015
C

Kit stepped in and set her books on the table right in the middle at the front, giving her the best view of the board. She slung her bag over the chair and sat down pushing her hood down and fixing her long hair.
"Morning sir..." she smiled and set to arranging her folders and books.
She was nearly ready when a group of human students walked by causing a racket. At this she pulled her hood back up and shrunk back in the seat a bit, biting her lip.

Leone let out a soft sigh upon seeing the nekomimi shrink back upon the loudness of a group of human students. "I'm not going to lie, this will be a somewhat hostile environment for us. Humans have a knack for exploiting weaknesses. We mustn't show any form of shame or submissiveness towards them, otherwise they will take advantage of it. You need to keep your chin up, your back straight, and don't pay them any mind when they try to get under your skin." His words were calm and wise, and were most certainly going to be repeated once the entirety of his class arrived.

It was clear that the neko had already faced the crueler side of humans, hence her reaction to all of the stimuli outside. It was really quite disheartening. But, Leone wouldn't allow himself to be phased by it. He would endure, and hopefully his students would follow his example.

The voidwisp walked silently through the room, taking the Protagonist's seat - the desk at the back by the window. She listened to what the teacher said, and decided to respond snarkily. "They're humans. If they think they can show dominance over us then they've got an overdue Reality Check."
C

She nodded meekly and straightened with a glance in the direction of the door, fidgeting in her seat and returning to filling in her details on the books.
She then let her shoulders drop and her ears raise from being flat against her skull.
"They... Won't hurt Us? They're not allowed to? ... Right?"
She tapped her clipped claws on the top of her books and waited for the class to arrive.

"I don't know, I think it would be quite funny if they tried. Bring it on I say. It'll let us assert the new hierarchy." 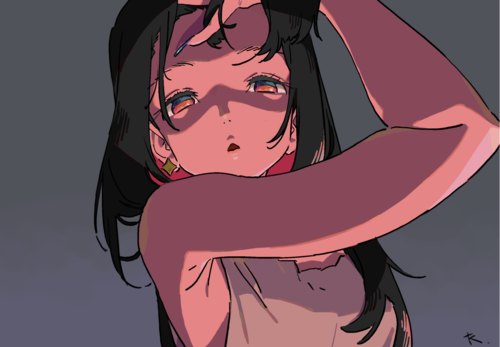 It's mercy I lack. Not rationality

Genres
All of the genres


Mayaka burst through the school doors quite dramatically, slightly surprising the people around her. They all kept her distance from her as she beamed happily passed the hallways, the ends of her hair lightly glittering with fire (Usually happens when she’s excited or really into something). She dressed in a basic stripped t-shirt with some shorts and also wore necklace that actually manages her body temperature enough not to burn anyone or catch anything on fire. She gladly waved to anyone who looked at her as she made her way to her assigned classroom and ignored any murmurs she happened to have heard.

When Mayaka stopped right before her classroom she could hear the conversation the people inside were having about the humans. “‘Morning everyone” she announced loudly as she walked into the class, noticing that there were just two other students and the teacher inside. Mayaka placed her book bag on top of the desk right next to the door then looked at one of the students who slightly sunk in her chair. Mayaka smiled then made her way towards the girl in the hood and lightly rubbed her head “As long as you don’t let them” Mayaka winked and gave the girl a thumbs up. She then chucked at what the girl in the back mentioned, somewhat agreeing with her "That's a good way to look at it... but how about we just try and get a long with them, I guess the humans and us both need some time to get used to each other first" she suggested as she leaned onto one of the desks.

Serenity walked into the school, her bare feet padding along the floors with barely any sound. She looked at all of the humans she passed by in wonder and slight anxiety. She didn't wear any specific school uniform, having decided that she prefered her normal dress over human clothing. She held her bag of water bottles close and walked to her designated classroom. Looking inside she saw three other students inside and her teacher. Taking a deep breath, she walked into the classroom and took a seat in the front of the classroom.
C

Kit smiled slightly at the fiery new arrival and smoothed her hair down before looking to the shy girl beside her.
"Hi... And thank you..."
She turned to Leone.
"Sir, is there anything we can be doing while we wait... "

Serenity looked over at Ayumi and looked down. "We have to show that we are better than that." She said quietly.

"Why? We're superior to them in every way. Hell, some communities even farm them like pigs. Or are you suggesting that we do the same as the vegans do among human societies and pretend that our prey has the same rights as us?"
C

"Not all of us eat Humans...."
Pouts at the insensitivity of her comment and resumes drumming her claws on the desk, a self conscious feeling settling over her as she points out her veganism.

"Not all of us eat Humans...."
Pouts at the insensitivity of her comment and resumes drumming her claws on the desk, a self conscious feeling settling over her as she points out her veganism.