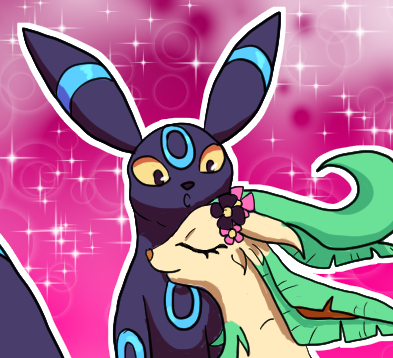 Far off across the sea lies yet again another region full of brand new and exciting pokemon. The region is known as Elysium and just like other regions they have their own Professor, the professor of pokemon health and dietary needs; Caspian Socotra. The day has come where he will present four children with their very own starter pokemon and they will embark on their very own journey. Either to help him study pokemon, or to defeat his husband, the regional champion after running through gym leaders. Their adventure is their own to make, after all, there are so many pokemon for them to discover. But they better watch out for the two opposing teams fighting over the rights to the legendary and mythical pokemon. They also must be wary of Team Rocket who are stealing other people's pokemon in the area!

Rules
Discord OOC; You must join the Discord OOC to be in this rp
18+ ONLY; Nothing against kids but I refuse to rp with anyone younger than 18. No red star, no join.
Detailed; Required to be able to type at least 1-2 paragraphs containing 5-6 sentences each paragraph
NO DISCRIMINATION; absolutely no discrimination of any kind is allowed here, if I see it or if someone feels unsafe because of you or a character I will give you one warning and one warning only.

Starting Town: Grimbsy Bay
Short Description: Grimbsy Bay is a small bayside town, it is known for being the home of Professor Socotra who has been researching the Pokemon of Elysium for several years. There are several small houses, a beach to the south, and a large cliff to the southeast with a lighthouse and research facility on top, that is where Professor Socotra lives. The town is very small, and often no one visits it, to the northeast on Route 1 is a wooded area with lots of ponds and tall grass. Every year Professor Socotra gives three to four lucky trainers their very first pokemon.

Spaidler - The Waiter Pokemon - Bipedal Pokemon with greens and oranges, eight eyes adorned on a small head, stands 3'4 and is fairly friendly. They often tend to the needs of their Trainer quite religiously, most do not fuss.

Flarret - The Burglar Pokemon - Small furry rodent Pokemon, hops along on all fours, is mostly browns with red and rust colors, has gloves protecting its hands as to not leave prints behind when thieving. It has a flaming tail and a flaming fringe. Often steals by pretending to be adorable and then nabbing whatever is in the person's hands. Naturally, a bit stingy and doesn't befriend easy. Often hoards what it thinks is precious. Stands 9" on all fours and 1'4" on hind legs.

Sharmus - The Water Pokemon - Small, stumpy, fat rolls galore with a long tail and back fin. Slick skin that allows it to swim with its stumpy legs and long tail with fins, it has a mouth with few little teeth, and two larger protruding teeth from an overbite, often seen sticking its tongue out. Spots on its back near its butt are often white, its body is usually brown and blue in colors. Sharmus is not the smartest, but they often play fetch well. Stands 2'7" and is 5' long.

Whispen - The Secrets Pokemon - Small, fox-like, runs on four legs. Whispen does not have a neck, and the ghostly essence that appears to be chest fluff is mostly transparent, a scarf floats above the body but just below the bulbous head. Two large ears, two large purple eyes, and a long tail with a purple flame at the end. Whispen is said to collect someone's deepest secrets and share them with others without warning, often embarrassing their Trainer unintentionally. This habit can not be changed. Less friendly to start with Whispens do gain friendship quickly and their loyalty is said to be eternal. Stands no bigger than 12"

Legendary Pokemon (sort of WIP)
Sovnglida (Sa-vin-glida) - Psychic and Flying - Said to be a pokemon with clouds on it, it protects the heavens and fights often with it's opposite. Lots of white and gold, often is seen as a good omen.

Abysion (Abyss-ion) - Ghost and Flying - Said to be a pokemon that trails ashes and decay wherever it goes, it is the gatekeeper for the underworld and fights often with it's opposite. Lots of dark colors, grey and black with purples, often is seen as a bad omen.

Dream Team Info - The Leader (and followers) is convinced that they need to capture Sovnlida and bring forth the day of reckoning, completely eradicating all evil and evil pokemon, destroying the darkness and bringing forth an era of light. They do not like Dark or Ghost pokemon and dislike Fire as well, they think pokemon help make people be better through guidance and love, and that they truly lead us, we do not lead them. Often they use Flying, Psychic, Water and Grass pokemon. Team colors are White, Gold, and Blue

Team Ashes info - The Leader (and followers) is convinced that they need to capture Abysion and force the darkness to descend upon the world, snuffing out all light and making those who hate darkness bend a knee by force. They do not see Abysion as evil, quite the opposite, they see Sovngilda as evil because they come only to celebrate the good, while Abysion is there through and through, and comforts through the bad times too. The decay it creates is seen as the start of a new, and they feel life can only flourish if first it is all snuffed out. They do not like Psychic or Water pokemon and do long like Electric as well, light makes them upset and they think pokemon make us strong by sticking with us through the tough times and defending us when needed, as well as giving us the what for when we step out of line. No one leads anyone, we are symbiotic and need to be reminded of such. Often they use Flying, Ghost, Fire and Dark pokemon. Team Colors are Black/Grey, Red and Purple