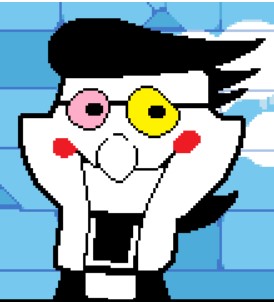 Hi hi!! so as the title may suggest I am looking for people to do a Deltarune roleplay with!!

So a little of info about me and how I write first, just so we get some things clear I suppose:

-I only write in third person and I prefer if you would do as well, I don't enjoy first person rps

-I'm not originally English so I might make some mistakes here and there, bear with me!

-Right now I am in school and working as well, I try to reply to posts as much as I can but keep in mind sometimes I might be very busy!! Feel free to shoot me a message though if
it has been a few days.

-I don't do one-liners!! I like it when posts have substance, I generally like to do a couple of paragraphs with a minimum of three and I would prefer something like that in return (though I generally copy my partners post length)

-I'm ghost friendly, but if you loose interest in the rp i would rather you just tell me!

-I can do doubles but only if the rp calls for it, I prefer sticking mostly with one character.

-i'd prefer rping on here, but I do have a discord if you would rather have that.


SO now that we have that out of the way, lets get into the fun stuff shall we?! Here I will put down what I am looking for!

-I really want to rp as Spamton!! I do also dabble in playing Addi-spamton (so spamton when he was still just an addison) and BIGSHOT era spamton!! Spamton NEO is also included of course. I have rped a lot as Spamton before, and I write fanfiction about him so I like to think I'm pretty okay at writing him!

- I also have an Addison OC that I would LOVE to use!! It could be in an OC x OC rp, or an Addison x my OC RP or what I'd most prefer is a Spamton x my OC rp!!

-You can rp as any character you like really, I would even be okay with pairing my Spamton up with your OC's if you like!! What I would also love to do is a current Spamton vs. Bigshot Spamton or Addispam? Sort of spamton going back to the past and meeting his past self's? This wouldn't be a romantic oriented rp ofc haha.

-For romantic oriented plots I would love to do something like Spamton x Swatch or Spamton x one of the addison's or even Spamton x Jevil!. I would also be okay with doing Spamton x OC (but only if your oc is non-binary or male sorry!! just a personal preference)

-Right now I don't have any specific plots I would like to do, (other then your character meeting Spamton and taking him in maybe :P) I usually like to brainstorm something with my partner! Though like I said before I do prefer something with romance!!


So yeah!!! I think that covers most of it (though if you have any questions feel free to ask) I hope to find some fun rps here and if you are interested feel free to send me a message!!
Last edited: Sep 20, 2022
Show hidden low quality content
You must log in or register to reply here.
Share:
Reddit Pinterest Tumblr WhatsApp Email Share Link
Top Bottom