"Thank you," she said, looking up at him with a grateful smile. She took his plate from the counter and washed it, setting it aside in the drying rack afterward next to her own. With everything in the kitchen now clean, she wiped her hands and turned to her guest. It was a bit odd now, trying to figure out what to say. She had texted him in desperation and he had been kind enough to respond. Now she felt as though she may have acted too hastily out of fear. It was clear that he didn't mind. She decided to stop worrying about it and just focus on the fact that Gabe had been nice and was a very good friend.

"I can-" she began, then she paused as she heard her phone going off from her back pocket. Confused about who would be contacting her, she pulled it out and glanced at the screen. It wasn't a text or a call at all, simply a news alert. Apparently there was going to be a massive storm in a few hours. Thunder, lightning, the works. It even said to expect power outages. Great. Well, at least she had plenty of candles and books to keep her entertained once it got dark out.

"Hm. It's going to storm. You should get home before it starts. It looks like it's going to be really bad." 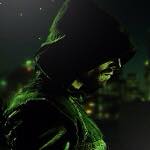 He had heard her phone go off, but didn't pay it any mind. As she looked at her phone, he gathered up his things and moved them towards the door. It was then that he heard her speak. A storm? Great...just what he needed. The roads always got washed out when it stormed, and if it was bad...it probably was a good idea that he leave now, before he got stuck somewhere. At home, he had a truck that he could use to get through the streets when it stormed. It was the only reason why he kept it, or else he wouldn't need it.

"Yeah, I should probably get going before the roads get too bad. If you need me again, just let me know, and I will be here."

And with that, he was off. He knew that if he stayed any longer, then he wasn't going to want to leave at all. Not even because he was obsessed with being there. He didn't like driving in storms, and the darker the skies got, the less and less he wanted to just stay there. Against his better instincts, though, he left her house and went on his way back home.

[So sorry for the late reply. I thought it posted a few days ago, but I never looked to confirm it or not. x.x]
Show hidden low quality content