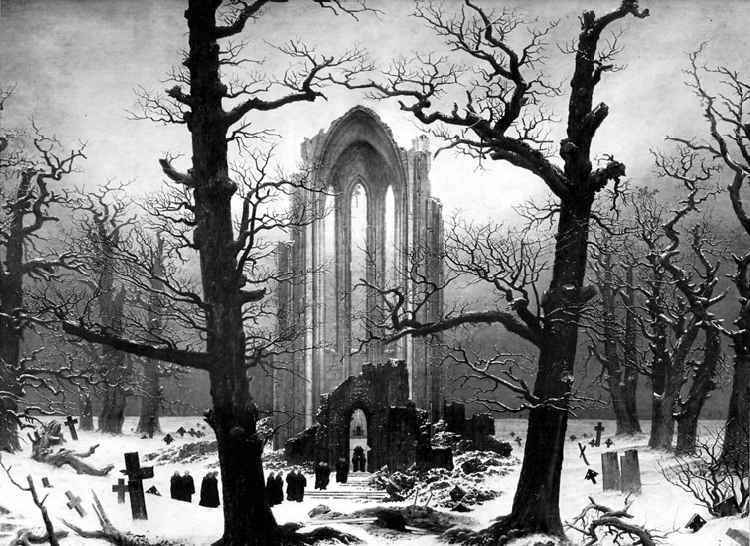 *This is actually the painting Cloister Graveyard in the Snow*

Civilization as we know it has succumbed to a prolonged and wickedly cold winter, and for more than five hundred years, the human race's numbers have dwindled due to our sensitivity to this bitter absence of heat.

But now, within the collapse of hundreds of thousands of cities and the backtrack to a time where people live in bands, which are only dozens of related people, usually nomadic. Moving to try and find food and a place to settle. A place of paradise. Of Rapture.

Religon has held strong. And new religions have emerged from this breakdown of industrialization. Major religions all speak of some place of paradise that awaits human discovery. Other religions tell of mystical stories of fantasies that could never be spoken of in a technological age.

But there is one new movement. There are bands belonging to it, and they can be identified by this mark upon their possessions and sometimes skin.

They are called the Pleasures and their beliefs are founded in the remnants of mathematical, scientific, and technological stand point with mysticism deeply embedded haphazardly into the core belief.

They have been a control group as of late. Groups belonging to this movement work usually are much larger than bands, but still nomadic. But not all of the people moving with the Pleasures are of their movement. You see, Pleasures have learned that it's better to have larger groups and a much larger range of human life in one area.

As such Pleasures feel that they need to be in larger groups, even if it's only temporary groups. But what they don't tell anyone is that they know EXACTLY where the closest thing to Paradise is.

This is the Pleasure's secret. It's about as close to paradise as one can come in these times. Most other religions aimed for their paradises to be in many other areas, but none have come close to finding K'See-ti. Until now.

A group of outsiders found it and were welcomes in, on the terms that they wouldn't talk of this place, and that they had to only visit the paradise, as no one was permanently rooted there, for the fear of ruining the one paradise left.

They broke their terms and now More groups are coming, and they aren't looking for a treaty. They want to live in this paradise with some views of entitlement, while others seek it in desperation.

Pleasures: Due to the declining hold of humanity on the world, it is not uncommon for this movement to accept polygamy or adultery, it may even be recommended. In the end, however, these people settle down with only one other person, called their life-mate.

Christianity: This horrid cold has whittled away at the once strong religion until it is only a shadow of its former empire. Bibles and written scriptures long since forgotten by its people, they idolize the cross and pray to a god that they can't remember.

Judaism: Faring better than Christanity, Judaism knows more of its past, and quietly holds its followers. Most practices, however, have been modified or forgotten.

Worship of Ancestors: In the past 500 years, this has become a bigger movement than Christianity or Judaism. The belief that deceased ancestors will help if you ask of them.

Anamistic: This is alongside of the worship of ancestors, it's the belief that not only do humans and animals have souls and a sense of life, so do inanimate objects. Trees and plants, as well as bodies of water, ect, are alive in a sense. Some other religions have developed a portion of this into their beliefs. Christianity has adapted a very cynical view of this, and believes that the world is a hell now, in some odd form, and that everything has a sinner's soul.

Four speculations as to what caused this dystopia:

War: There had been many disputes, battles, wars, and strife to the years before this world grew cold. There were bombs, nuclear devices, and man other weapons that could grow to have a profound effect on the climate and of the land.

Technology: The technology 500 years ago had been beyond anyone could have imagined. We had just began to crest that moment where people were living to unimaginable years, and fewer were dying from common sicknesses. But, also due to this breakthrough technology, we had polluted our world's water and air, this also could have helped this worldly discord.

Couldn't be Helped: The sun in our solar system was predicted to, and has been slowly moving out of our planet's range, eventually leaving us like this. We WILL keep getting colder, there's nothing we can do about it but speculate why it is that there is still a spot on Earth that is habitable as K'See-ti

Theory of thinning/thickening air: Chemicals in the air either thickened or thinned, therefore either strengthening the ozone, or destroying it further, along with the greenhouse gasses. This is only speculated....

Can we make our own group/religion up?

You're going to have to contact me and tell me about it before the character is made. just send me a description in a PM or on skype.
W

Personality: psychotic, though he mostly exudes an air of cold calm impassiveness
Set of beliefs/morals: All religion must be destroyed and its practicioners killed
History: It is unknown what first drove Nicholai Davenko to insanity, but what is known is that he is utterly rutheless and determined in his quest to destroy religion and all who follow it.

though he is alone, Nicholai is a skilled huntsman and his knoweldge of human psychology allows him to predict his opponants fight/flight options and plans.

Nicholai's first kills were centred around the ruins of Moscow, at first it was just loners, each found shot by either an 7.62 rifle or a 9mm pistol.

then churches and other religious buildings started burning.

it is rumored that the 'Grim Reaper of Moscow" is moving in on Paradise, and that he plans to use it as the ultimate trap.
ACCEPTED

Personality: Oddly, a cheerfully pessimistic person. Believes that they're going to loose their paradise to the siege of outsiders, but it perfectly fine with loosing it.
Set of beliefs/morals:
History:Used to live with her family in the ruins of this building

The thing was, the area kept getting colder and colder until they finally had to move and ran into a group of Pleasures, whereas the family was highly involved with the remnants of Christianity. One day while traveling, her parents finally succumbed to the cold and she was absorbed into the community of the Pleasures. She does not believe in much of anything, but over time their talk of their beliefs began to make sense to her. She's been with them ever since.
T 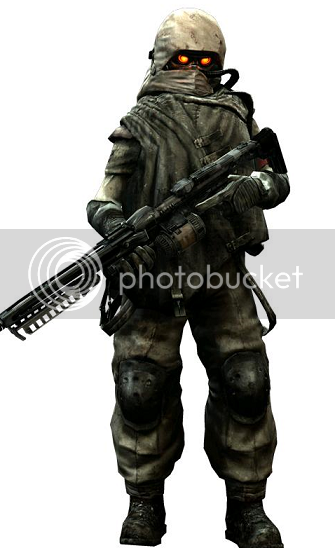 Personality: Confident in his military training, Yuri doesn't know the meaning of the word "impossible"...Ok, so he does know it's meaning, he just won't admit it. He is very outgoing and energetic, which is rare among former Russian soldiers, and even rarer among former Russian snipers. Also strange for a sniper, he hates being alone, and often dissolves into psuedo-philosophical babble if he gets lost/seperated.
Set of beliefs/morals: Constantly questioning the existence of God/Higher Power. Also believes that nothing is impossible, as well as the sniper code of One Bullet, One Kill.

History: Yuri's birth is a mystery, though it can be assumed that his parents were low on supplies, as he was found, abandoned, by remnants of the Russian army. Raised from a young age to be a scout sniper, Yuri became adept at both hunting and surviving alone. However, for reasons known only to him, Yuri recently went rogue while on a scouting mission. Now he wanders the land, looking for something, or someone.<!-- / message -->
C

This. . . interests me. I'll have to figure out if I can do it or not though since I'd hate to post a profile & then just drop out because of University life getting more intense once finals week gets here.

It's all good Riri.
A

I don't need passes to kill them.

This may just be Feydorov's first crossover appearance!
T

Personality: Normally apathetic towards others, Feydorov typically looks out for himself however he repays acts of kindness toward him with a favor in the future.
Set of beliefs/morals: Feydorov believes in the one truth that has shown to be more consistent than any religion that has sprouted since humanity's decline: Death.
History: Former Bulgarian Spetsnaz, Feydorov has been wandering aimlessley since deserting his unit. He has survived on whatever he has found that is edible, reportedly including human flesh. He just wants to find a place where he can rest his head.