Where did you first start forum Role-playing?

I know this has been done before, but it's been a while and I am always curious where people got their RP roots.


I first started, a little over two years ago, at a site called RPGC (Role play games chat). I left shortly after finding Iwaku though, and now I never post there at all.

I was a bit of a nerd back in the day.

LURKER MEMBER
FOLKLORE MEMBER
I started out on a place called The Ronin Lounge. It was a Ronin Warrior's dedicated website and I actually just joined to annoy the ever loving fuck out of my sister. But then I got snagged in an RP. Soon the forum made a walk across the internet desert and journeyed to The Bent Lounge, which we would also leave and cross another desert into a place we called Sanctuary.

Literally. That's what we called it. Last I checked it was still up but disgustingly slow.

And so I had a one shot attempt at making an RP over on MegaTokyo, Gabe abducted me, and the rest is history.
S

Started off in a RP called Celestia, made the jump to a short lived world called Akraion, then onto a vamp/werewolf RP called Requiems Dream, then went on hiatus from RPing until I started getting the itch to play again and a friend referred me here.

My first online roleplay experience was actually in Chat RP form at Sailor Moon Universe. o__o It was like Iwaku's cbox, but we didn't have a separate "roleplay chat". So half the people in there were just chatting and the other half were chatting/roleplaying In Character.

My first FORUM rp was when one of the site members there invited a bunch of us to their site to do a Sailor Moon RP. 8D It was for Sailor Zodiacs, and I was Sailor Virgo.

It didn't last long, but that place introduced me to organized roleplaying. I loved it so much I started my own roleplay forum (Moonwings) and the rest is a long long history. XD


Also, I clicked this thread expecting an intriguing writing challenge where authors are encouraged to play bodies of vegetable matter.

I am disappointed.
O

See Diana's explanation. I was Sailor Taurus and I had a kick ass backstory!

I was a bit of a nerd back in the day.
Click to expand...

Iwaku for me.
D

Oh and I remember Woody got me here.

lololol i followed the woody

Oh and I remember Woody got me here.

I refuse to talk about my RPing past... It was unwholesome. With Narutards.

I got my start about 4.5 years ago on a forum attached to a webcomic that I've shared with a few people here, called Lackadaisy. The link's in my sig if you want to check it out. The forum has a role-play area, with the main IC set in the Lackadaisy world (Prohibition-era St. Louis, populated by anthro cats). I'm still a member there, but the speed of posting has slowed way down recently, and I just needed a break. Over the years I also tried out Surreal*Twilight, but the posts were even SLOWER there, and the "graduation" and "grading" system just wasn't my style so I didn't stay there long.

I actually found my way here by stumbling onto one of the vote sites while searching for a new place to rp during my Lackadaisy hiatus, and I'm glad I did!
D

Fel told me about Iwaku way back. I didn't check it out until I was bored one day.
R

i did a stint on some site i can't remember, got bored, left in a month. then i started posting D&D-related conversions of Breath of Fire characters on dragon-tear for 3rd edition D&D. then Gabe Zero found me and invited me to iwaku 1.0, back when it was 90% Dot Hack fan site and 10% everything else. Oh! and Peridox was still admin supreme. and i played my first longterm forum RP on Iwaku 1.0 with Reikei. something about a colorless world.
K

Oh, I was actually expecting something along time lines of what Asmo mentioned. Strange as that is.
Disgraceful as it is, I came from a place you might have heard of... this little site called Gaia. =|
My first roleplay was vampires and werewolves, but it was enough to get me hooked.
When I was shown Iwaku, I dropped everything else and have since clung fiercely to sweet Iwaku.

Red Iwaku-Tan! said:
I refuse to talk about my RPing past... It was unwholesome. With Narutards. 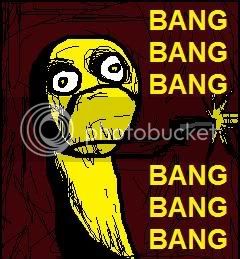 I... really haven't changed much since then.
C

Red Iwaku-Tan! said:
I refuse to talk about my RPing past... It was unwholesome. With Narutards.

Our past is steeped in mystery.

Where I started out, was Neopets when I was 12 years old a place called Twisted Worlds. Way before I joined Iwaku, even! Reiz, Slyen and Grumpy are also from there. They're 3 really cool guys and I'm a really cool person myself, so you can imagine just how cool this RP site was. ;D

Long, long ago in a galaxy that seems farther away than it should; there was a twelve year old girl, who idolized her older brother.
That girl joined his silly little role playing forum, in spite of not really seeing the point of it. Eventually, she began to see her characters and the stories they were a part of as a way to escape reality for a little bit and be someone who she wasn't in real life. She began to play on many sites, mostly small forums that her friends started.

That twelve year old was me, as you probably expected.

After a while, though, I stopped roleplaying. It was partially because life got too hectic, and partially because I didn't want to continue a hobby started by my brother. Then, I started talking to a few rather awesome people from here and joined... while a bit inebriated....

I think I'm missing some details there. For some reason, Roleplay Gateway is something that keeps popping up in my head, but I'm not sure I was ever actually a part of that.

A place called MVP boards? was like a general forum place but evolved into Anarchy Zero which had far more serious RPing and was where I was recruited from by Gabe. It died so I had no reason not to go here.