A group of friends decide one day to gather together and play the all new (videogame name suggestions accepted). God knows why they decided to do so, since the game was such a cheap piece of, thing, that probably was not even worth it.
Still, they sat on the couch, all looking at the outdated laptop where the game was running, and then...

(the sound effects were just as cheap)

...the friends found themselves trapped inside the game, their bodies just a series of poligons and graphic textures. To make it worse, they had no idea on how to get out of it. But the worst, truly the worst part...

They were all level 1.

Welcome to......(name still needed guys...! ), where you can live the life of adventures you always wanted to live!
Please choose your gender:

Some notes on race selection: It's just for appearance.

-Warriors is the generic category for knights, barbarians, etc. Anything close-ranged-combat that does not use magic as a main ability. Your blades and maces will strike stronger than other classes. Kick ass. Of course you may cast spells, but you won't have as much variety and potency as Mages do. Sorry, our game engine is too stupid to allow you to use a bow or a staff. Buy our next upgraded version :(

-Archers encloses any other thing such as archers, rogues and so. Archers have bonuses with bows and crossbows. You can only wield daggers as other type of weapon. Again, we apologize, but it is impossible for you to wield any other type of weapon or shields. You will also fail irremediably at attempting to wear heavy armor. You may cast some spells, however. Some archers may tame a wild animal and keep it as companion.

-Mages includes anything like necromancers, wizards, sorcerers, warlocks, etc. Among the array of spells available, you may cast fireballs, thunderbolts, snowballs, summon demons and spirits, heal and shield allies, and probably more. What Mages can't do: Use any other weapon that is not a staff or a sword. You will also find impossible to equip any type of armor, so I hope you like wearing robes. You may use a shield only if you wield a sword. (stupid rules huh?)

In-Game Name (and gender):
Race:
Class:
Appearance: (Pleeeeease use a picture from a videogame, whichever you fancy. Try to keep it 3D)
Specialization: (if any, you can choose this later, ignore it otherwise)
Short Bio: Whatever your character was doing/ good at before entering the game
Personality: Personality- Do you like ice cream?

----
The aim: Comedy. A note about this. It happened before to me when making comedy RPs, that players said, ''I have no ideas to post''. Well I have news for you: You don't need to post hilarious stuff all the time. It's actually impossible, I believe. Just post. You will think of something funny later and if you don't, someone else will.

Short posts. I get tired after reading more than 300 words in a single post, just as all magic tigers from Omega Centauri do. Please, no wall-o-text.

Post rather frequently. Once a day is best, but it could be less. Please let me know your post frequency ;)

Um that's about it so far. I'll be updating this in the future, should the need arise.
And the need arose.


*flies to the horizon*
J

Short Bio: Rick is a programmer. High school programmer. Meaning he doesn't really know as much as he acts like he does. In fact, its just a title he decided to give himself. He can't back it up at all. He knows nothing about programming except that its many different languages. And he's good with languages, so why not?

Personality: Personality- A way too serious guy.
Do you like ice cream? No

Woohoo our first character!
and also, I forgot to add the 'Age' in the CS.
Will edit that righte now.

This will launch once we gather a group of 4-5 people. If it happens to become too popular, (which I doubt but you know, think big) a couple more players will be allowed.
Otherwise if nobody joins up after the third player, that is, including me as one, we'll just have to get started as well.

Specialization: Healer
Short Bio: Marcus is a sociology student and psychology major. He hopes to one day work as a social worker. Before being sucked into the game, Marcus was assigned a project worth 95% of his final mark. He was to find a place or situation where people typically become enraged and angry at each other, then anaylze and resolve the source of that anger. Marcus decided he would explore the realm of 'Nerd Rage" as the subject of his thesis. Little did he know what would result when the path led him to "name of game".
Personality: Clutz with a heart of gold. He's always trying to help the situation but usually ignored.
Do you like ice cream: His favourite is vanilla.

(((Or wait. Do they have to all be around the same age? Also I thought maybe we could just reference the game by it's acronym like most people do with W.O.W. Maybe something like W.H.U.T. or L.U.L.Z. ?))
S

Your characters are both accepted.
We still need one last member to get startedd!

Acronyms sound good to me. Yeah Why not. Um. Feel free to keep on suggesting stuff. Otherwise, so far, the best thing I read was ''Name of Game''.

And ages are OK too.

Hey we're still looking for people. So you *points at you*, get your ass in here.
S

I just stole Kuroshimodo for our RP. What a criminal I am.

So, Kuroshi... I guess you play the part as a female char in-game that has a glitch with her greaves and also the bad luck of being attacked constantly by bears out of nowhere! Awesome.

I'll wait for him to post something resembling a CS and we get started.

WE STILL HAVE ROOM FOR ONE OR TWO. OR THREE.

Specialization: Monk
Short Bio: Katja is the daughter of a gamer and the blood of gaming runs through her veins. She dedicated countless hours into honing her character until someone hacked her account. Sadden, she decided to create a new character and this time decided to try something different. Her devotion to gaming has detoured her from making any friends or having a social life.
Personality: The loner who posses a gentle heart yet a fighting spirit to prove that she is right. Not one to easily give up and always fights fair.
Do you like ice cream?: Mmm, cookie dough. . .
S 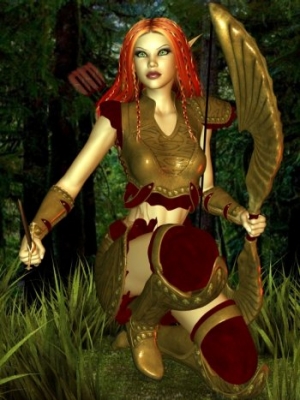 Short Bio: Patrick worked as a car-washer in a car washing place at a shopping mall. His only ambitions in life were: Getting a job (v); Managing to date a girl (x); getting his own apartment (v); playing cheap games (v). So, the only thing in life he still needs to get is a girlfriend. Or a date, at least.

Personality: He loves Mint choc-chip ice cream. He can be quite moody at times.

We will get started tomorrow!
woooho!
S

I really hope nobody takes the acronym as something too offensive. English is not my first language, and after I posted the thread, I wondered if it was something a little bit too strong for the forum's standards.

I apologize for any inconveniences.
K

I found it funny xD

I maybe delayed in getting a post up however I will hopefully get a post on by tonight.
H

It's all good. A lot of people here aren't first language English. And no worries. It's not offensive, it's hilarious.
B

Just posted. I know you want to keep posts shorter. It's a bit harder for me but I'll make a conscious effort. Also I'm sure we'd love to have you along Bell. I can't say myself yet though if we have too many. So whenever Selenite gets on we'll check it out.
K

Well I hope we can welcome you aboard Bellsong. :) For the time being. . . have a cookie while you wait. xD *hands cookie to Bellsong*

Yes Bell, of course you can!

Since our group of four is already inside, you could play as someone who enters Patrick's apartment later on that afternoon, for whatever the reason, and gets caught inside the game as well.
Of course, don't feel limited by that: if you had a better idea, go for it.

To ALL THOSE playing C.R.A.P.;

A few things to keep the thread healthy.

- Let's keep a conversation here. This is a partyyy...!!! Please remember to check this OOC and post here all doubts and anything you feel like saying. I will use this as my communication tool Nº1.

-I love it when people reply within a day, or two. However that is not always possible, I know. BUT; IF YOU ARE REQUIRED TO ANSWER AND YOU DON't within a week, then the story will move on, and we will leave your character frozen due to a game engine problem. Crappy game.
If you were not required to post (meaning, nobody is 'stuck' because of waiting for your move) then you have up to two weeks for the frozen glitch to happen. Of course once you come back, you recover your character. Don't despair.

-I will let you know when someone levels up.

-If your character dies, it will respawn at the closest respawn point. This are the crystal temples.

-I aim at a group of 4/6 active players. So after we reach that limit, it will be officially closed unless you guys decide otherwise. :D
S


Also, Hartke; great post. Length is alright there. Your post is by no means a wall-o-text. It's easy to read, also, so it's not a problem. The 300 words cap I set it because of my bad previous experiences. Really, threads full of wallotext are usually not the best format for comedy. But if you feel inspired, go for it. I myself will exceed the 300 word limit from time to time.

Original poster
Sweet. And yeah, I'm sort of treating this as a way to hone my editing skills. It's interesting to see how much better a post can be sometimes when you edit it down into something more precise.

Anyway. This is going to be fun. I think the frozen glitch is a great idea. I'm tempted to make a list of MMO gliches I've encountered in my days. Maybe toss in a few cliches and idioms.
K

Original poster
Sorry for my delay in posting guys. Been rather preoccupied sadly.
S

Original poster
It's OK, Kuro. (I know you can't stop watching the Glorious and the Infamous, that's the true reason why you are not posting)

Jovian is not showing any life signs either, and Bell never came back.

I must be one lousy Game Master.