A Cry For Help!

Your life changed in an instant, in retrospect it felt like waking up, as if your entire life before she entered you had been asleep. Reality changed forever in that moment and no matter how hard you tried you could never go back to sleep.

This is a horror/modern/fantasy RP. You will be contacted by someone who needs your help, some unnatural force is plaguing her and people around her are dieing. Can you get to the bottom of the stalker or are you just another victim?

So much opportunities I'm in I'll do a sheet on Monday when I finally have time off.

Ok all those joining, welcome. I originally designed this as a CoC D20 scenario but decided to go with freeform. Loveless will be playing the part of the distressed damsel and I've already briefed her on the part. Everyone else make your characters as normal. Its set in the present day and so long as you're ordinary humans you can be anything you want and there are no restrictions on equipment (though you'll have to justify bribing a 30mm chaingun). Its a fairly serious theme though you may acquire some magical items along the way and you'll certainly face some unusual sights.
N

I'm interested in this myself, it seems intriguing!
P

Ok, great to see so many people interested. everyone should fill out a sheet, make it as detailed or as plain as you like. I would prefer it if at least some of the characters knew each other in some way before the story starts (will be easier to get everyone in one place that way).

Heres the minimal sheet, though feel free to use another from the RP guide or add in other details as you want.

Patty, I'll wait for you though it will be easy to slide you into the story once we're underway.
V

Looks like I'm going to have to suspend this and revive it later as no bios have been posted. I'll try run it again when the time is right.

View attachment 1109
Current Goal/Purpose:
To defend his clients in court while keeping a healthy bond to his family. Alan loves both his job and his private life, so whenever he's not busy with a case he spends his time raising his kids Robert(8) and Vanessa(5) with his wife, Ida.

Alan has recently accepted the role as the coach of the local soccer-team which Robert plays on.
It's fair to say Alan doesn't have much time for his own interests.

General Personality:
Eccentric, vigorous and serious are the three words that describes Alan's personality best. His eccentric side comes most notably through while he pleads his client(s) case in a court of law. His vigorousity is a good tool in his lifestyle and accompanies him in his job. While in his serious manner he can turn very silent and focused.

General History:
Alan grew up with his mother in Baltimore with a younger brother. His family situation made him quickly into a grown man, with much help from his uncle, Ronald, who was a lawyer too.
In his early 20's he moved to New York to pursue a career as a defending lawyer.

Alsmost twenty years later and events just keeps coming his way to keep him a busy man that feels satisfied with the way things are.

There, you got one :P
Hope it's okay, history might be a little short and vague.
V 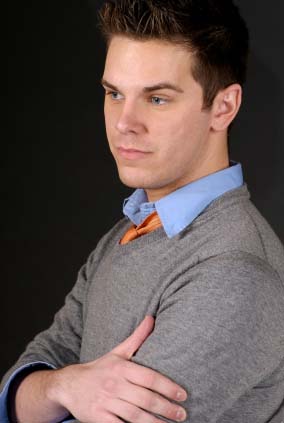 Current Goal/Purpose: Donald's current goal in life is to raise his daughter and earn money to pay for her education. She is, more or less, his purpose in life, and it would crush him to lose her.

General Personality: Donald is a pleasant guy with an easygoing attitude and a love of the great outdoors. He isn't too fond of the city, but lives there because it's close to a good school and the automobile repair place where he works. He doesn't like to get in fights with people, and generally prefers to lay low and take it when people insult him. He is very fond of a good drink with his coworkers, and likes to play the guitar.

General History: Donald was born in Wichita, Kansas. A bright boy, he excelled in his studies, earning himself a college scholarship and going to college almost for free. This was good for him, because his parents weren't exactly rich. In his university studies, he met Katelyn Oakridge, and they fell in love, marrying after they graduated. A couple years later, they had a daughter named Lisa, and for the years that followed, Donald's life was slow and uneventful, aside from the standard troubles of a parent. He got a job as a mechanic in Kansas City, and nothing much has happened there either. More than likely, as the years would go by, his life would have been boring as heck.

Which is why, when he was contacted, he would jump at the chance to get out of the monotony of his life.
V

has an anklet http://factoidz.com/images/post/bracelets-anklets-and-armbands.jpg, and Malleus Maleficarum the book, kept with her at all times.

General Personality: Use to be a very sweet motivated girl, who would hang with friends and go to the mall and have fun. But since She came, Alice is now a very distressed girl, who is practically afraid of almost everything. She stays in dark rooms and reads things about witches..etc..that she never would read before. Her friends barely see her, and have come to conclusions that she has gone insane or mad. She dresses in goth clothing and wears dark make-up, again, that she never wore before. Use to go and talk to random people that she didn’t know, or go to very crowded places. Now, she never goes around people, the very least a crowd of people. Alice has changed in many ways from what she use to be.

General History: Alice was born in quite the normal family of three, with a little brother coming in three years later. Her parents being Christians and her dad being a priest and very well mannered, they had taught her the same way. Alice, was a well mannered child in all of her private and public schools, and was always the one to break up fights when they occurred. She was in cheerleading during middle school, and got out of it when she entered high school, being a bigger book reader and writer, although her parents didn’t enjoy it when she would stay in her room for hours reading.
At the age of 17, her family decided to go to her grandparent’s for a few weeks. They had asked her to go with them, but she had decided to stay home. One of the days that they were gone, Alice decided to fix up her room a bit; reorganize it. During the time, she noticed that one of her book shelves was looses and went into the basement to get a screwdriver and some extra screws.
In the basement something caught her eye, way in the back, a lone little shelf sat on the floor. Thinking that she could use it, she went back there to get it, and when she moved, under it sat a book, labeling Malleus Maleficarum. She looked though it and it got her attention pretty well, as she then noticed a little box that sat about a foot away from where the book lay. She took the box and kept it also with the book.
Alice went through all of her school years making good grades and favored by a lot of the teachers. At the end of high school she decided to get a job and start collage, already having a few scholarships. During collage she began reading Malleus Maleficarum. Which soon enough, dragged her mind to the book again and again; rarely thinking about her school work. After a while some of her friends started get worried and decided to drag her to the coffee shop to get some coffee and to get her mind fixed on something else for a change.
On the way back to the dorm rooms, one of her friends got killed from train suddenly passing over the railroad tracks. Six months later another one of her friends was killed by a passing robber.
A

View attachment 1370
Current Goal/Purpose: To live her life how she wants to, and to have as much fun as possible.
General Personality: She is quite unwilling to engage in acts of physical labor. She is very social and has a lot of friends who aren't all too close with her. She seems to be a bit lazy except when it comes to modeling which she approaches with enthusiasm. She isn't the brightest crayon in the box, and isn't exceptionally intelligent. However, she has a rather strong sense of right and wrong, and isn't afraid to call out someone when she thinks that they're doing something wrong.
General History: Sylvie was born with a silver spoon in her mouth because her parents were both rather rich. However, she was not the heir of the family fortune; her older brother would be. She did okay in school, but not really well. She treated school as a necessary pain that didn't really have a ton of merit in the real world, or at least the world she wanted to live in. Her parents' views slightly conflicted with hers, but they managed to live peacefully long enough for her to move out and start a life on her own. She began modelling and eventually managed to make a living on her own.
V

Heres the IC, its finally up.

what are the rules?
V

Characters are modern, with no supernatiral powers, just regular people. The weird stuff will happen once the story gets started. No rules per say just use common sence.
K