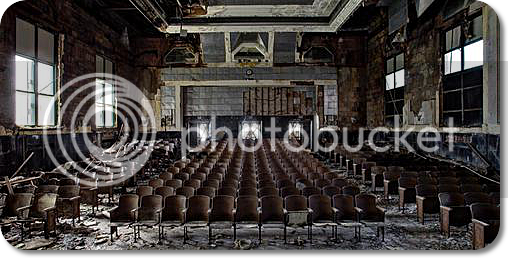 This old cinema was already abandoned from the start. The place was once filled to the brim with laughing audience of all ages in the 1990's. Now, it's home to what's left of rodents and critters lying around.

I am interested, however, I don't know when I'll be able to get a character sheet up. Probably sometime this week! Also, are there any posting expectations?

Well, a post should have correct grammar and punctuation.
Mistakes should be corrected when you see them.
Just try to use a wider array of grammar.
Other than that, everything is accepted.

Hey, something came up and I don't think I'll be able to sign up. I'm very sorry, I hope you get lots of people though!

It's fine!
Real life is much more important.

I love this idea. I have a pre-made character, but she's kind of a scavenger/dealer/medic/teenager. I was wondering, is the whole of earth covered in radiation? Are there parts where you can survive? And how do the radiation rules apply? Is mostly everything damaged?

Thank you very much for taking interest!
Yes, there are certain areas in which radiation does not affect.
I will list the areas as radiated or safe in the area list underneath the master post.


The radiation rules will be applied once I get everything organized, and fix the master post.
Of course, the radiation will die down, and everything will be safe to explore, but only after a quarter of the roleplay has passed.
Mostly everything is damaged, but in some places are still intact and dandy, and some are even left untouched, but not many.

Member of the Yato Club

I'm new to roleplaying but I'm much interested in this ; u;
C

➼ ✖ Q U O T E ✖
"Hearts are wild creatures, that's why our ribs are cages."
"We all have pasts, we all have skeletons in our closets and voices in our heads. The one difference between making the same mistake again, or turning a corner, is letting it affect you. Because if it affects you, enough to make a change, then you care. Then you're different."

.: S T R E N G T H S :.
+ Her strength is mostly made up of her personality.
+ She has a spitfire personality, which goes hand in hand with her ability to take on projects without little fear.
+ She has a 'leader' ability/attitude, but all the same she wouldn't want to be the one responsible for the life or death decisions.
+ She's a good shot.
+ She can carry heavy weights on her back.
+ She has very good balance.
+ Great doctor.
+ Good sniper.
+ Beginner Engineer.
+ She's a free runner. It was a hobby before everything happened, and she's still pretty good at it. It makes for an easy getaway, if she needs to.

.: W E A K N E S S E S :.
- She cares too easily. Don't mistake care for trust. She has trouble trusting, but if someone dies in the arms of their love, she's most likely going to break down and cry.
- She's not good with death.
- Most times she will be the girl who questions everything someone says or does. In the best interest of others, of course.
- She's still a teenager, which calls for rash decisions and bad judgement skills.
- She's more likely to shoot at someone than walk up and say hello.
- She's wary of people, because she's seen what they can do.
- Average physical strength.

.: H I S T O R Y :.
Backstory:
Beth, or better known as Scarecrow in her school, was the small-time drug dealer in her hometown. She was only known by that by her peers, and she was a fairly good girl other than that. Don't get me wrong or anything, she wasn't supplying meth or heroine to anyone. Just small things, like Baclofen or Ritalin or things that teenagers were into. It was just small sales to keep her on her feet during the times she went on a rebellious streak and her parents kicked her out of the house.
Her father owned a clinic, and she often bought meds from the person that supplied said clinic. Her father taught her a lot about medicine, and as an early child she was always bright. Her family died in the beginning, and she learned anything and everything she could from her father's old textbooks. She sought the cure for the VIRUS, but months and months later she still had nothing. She realized one day, as she was teetering between another high due to the failure of her 'life mission', that her family would want her to live and do what she could to survive, and if they could see her then they would've been ashamed. She cleaned herself up, planning on making it out alive, even if alive was just one more week. She makes weapons and other things to sell, trading those things for food, water, necessities, ect. She sells the remaining drugs to people who have something she wants in exchange, usually biding her time unless she was in critical need for something or unless a particular person had something she wanted most. She had stolen drugs when shit hit the fan, living off of small-time sales and doctor services. (Because, y'know, in the end of the world you're bound to get a few cuts and bruises here and there.)
She sells Cigarettes, Batteries, Weapons, Pills, Bullets and services to people who need help or have something she could use.
On her mother's deathbed, she confessed that Beth had a sister. That's one of the reasons Beth decided to get her life in check and go on a journey to find her. Even if she was one of the undead.
Medical Training:
Beth was a shadow of her father, quickly learning many things about being a doctor and following in his footsteps. She can recall from an early age she was extremely good at school, jumping several grades before she was at the age of fourteen. Her father taught her everything she knew, with him being a great doctor. She was exceptionally smart, She had a Scholarship to MIT before the outbreak. At the age of 18 she was a full-fledged doctor, taking courses online and passing all her grades with flying colors. After becoming a doctor from online courses, she graduated college online when she graduated High school at eighteen. She then got accepted to MIT, a college she wanted to go to to get the rest of her degrees. But, right after she graduated College for her second degree, the outbreak destroyed everything she ever cared about. She still is an exceptional doctor, but she has lost interest in most things. She only lives for a few things nowadays, one of them being someone others can rely on, the other searching for the cure on this never-ending journey.
Aside from being a Doctor, Beth also dabbled in Engineering. She often fixed up cars before everything, and she was actually pretty good at it. Not as great at that than being a doctor, but you get the picture. She does what she can fixing up cars now, putting armor on them or attaching weaponry. Being that she has the right parts, of course.

Thank you for taking interest!

Accepted!
Is Georgia Ridana an NPC, I have to know because then she ( Georgia ) cannot interact with other players majorly.

Thank you for your interest!
Do you have any inquiry that needs to be answered?
C

Accepted!
Is Georgia Ridana an NPC, I have to know because then she ( Georgia ) cannot interact with other players majorly.
Click to expand...

Georgia Ridana? Where did you find that?

Member of the Yato Club

Thank you for your interest!
Do you have any inquiry that needs to be answered?
Click to expand...

Thank you for your interest!
Do you have any inquiry that needs to be answered?
Click to expand...

OH! I put that on there because I may add another character. If I do, that will be his name.
S

Hello. I saw the WIP up on the overview, but it seems like this is accepting some people already?
I'm definitely interested with this genre, for the first time really.
I'm not too well versed in Apoc. or Dice RP's I do have basic understanding of how to go through it though, so I hope you'll still have me > A <

A few questions though, and I hope you don't mind:

Is there a chance of our characters dying anywhere in this RP? Be it through walking - or actually, just living - through active and intense radiation spread? Or maybe through some turf war later on [?] Or are there just going to be disfigured body parts from being exposed to so much, within such little time? [I realize you're fixing these Radiation Rules, but perhaps just the first part can be answered?)

... I definitely had another question, but it has slipped my mind. Sorry, if I remember I'll definitely post once more! I'll be fixing up a Character Sheet tomorrow! As soon as possible.
Show hidden low quality content