Original poster
Hello! I wanted to do a 1x1 RP in the future using this plot, but I wanted to get some planning done, and some advice to get the RP plot rolling, and hopefully possibly find anyone who may be interested in this as well!
This RP was inspired by the picture below, I found it on Ifunny today, and I couldn't help but get inspired to create a Zombie/loves RP using Anthro wolves. This drawing is by Zengel on DeviantART 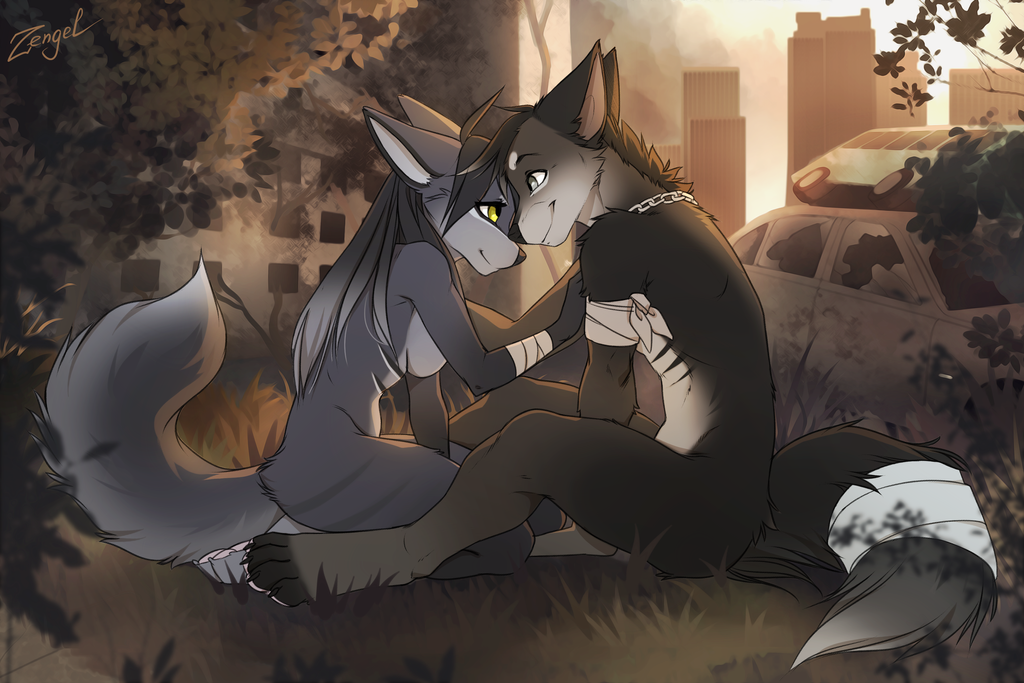 Backstory...
A new type of rabies has taken control of the Wolves (Used from World War Z, not my original idea) turning them into Zombies, or living-dead. Cities have been destroyed, families broken apart. One of the destroyed cities is Seattle, a once thriving coastal city with plenty of tourist attractions, has now been left in rumbling smoke and fire. It's almost like a scene from a devastating Earthquake or Volcano eruption. Of course, a large city has a large population of people. The once dense population of Seattle is now under smoldering ruins of a once great city, and the people are worse off. Anyone trying to survive in Seattle will be in luck if they manage to live just a few days trying to stay quiet and gather supplies.
Plot...

Before the apocalypse, Infinite was a Canadian hunter living in Vancouver Canada. He was mainly a deer and moose hunter, but will sometimes get birds if they caught his interest. Sometimes he would get a bear, but that was only when they had spotted him and were about to attack him. Infinite is skilled in the Bow and Arrow, (Along with Crossbow, but not as much.) and Bolt-action Rifles. He is 22 years old, and was studying to become a Doctor in College.

When the first news reports of a new virus attacking american citizens. Infinite had packed his bags up quickly and took off into the woods. He knew how to hunt, he knew how to heal himself to an extent. He would do fairly well in the woods. He just did not want to be apart of the new chaotic world that's occurring. Once he was into the woods, he made his way South (Though he actually thought he was going north) To get away from the Vancouver and Seattle. But he ended up in Fall City, a part of Seattle's smaller cities around 2 weeks later, after he had gotten attacked by two of these living-dead creatures, and was scratched in the process. He was lightly injured, and it would only take one person to see to kill him. So he bandaged himself up, cleaning the wound every once and a while and made his way through Fall City to try to gather food supplies. That is when he met (Your character) by trying to kill him, but he was ready to attack her as well...
Plot would go on from there..
Show hidden low quality content