Original poster
The year is 2017, and mankind is once again at war. Political tensions have been high in recent years. Iran has been accused of developing weapons of mass destruction. North Korea has a new dictator out to prove his power. China has been planning a global economic takeover. The list goes on... but no one knows who was responsible for this.

According to the news, the first reports of an outbreak started on October 1st. It was big right from the start, had every news channel covering it constantly. L.A. was first, but within hours, reports started coming in from Vegas, Denver, Dallas, New York City, Boston.... and the list just kept growing. Next day, news said that other countries had been hit by the virus too. Canada, Mexico, England, Japan, Russia... I stopped keeping track of all the countries eventually. Seemed like it was everywhere. And it was killing people... But on day 3... something else happened. Started getting reports of people who had been declared dead, somehow getting back up... Only they were still dead. They went on a rampage after they got back up, attacking anyone around them in any way they could. It was like something out of a bad movie, only it wasn't a movie.

That's when they declared Martial Law, and starting putting up the Quarantines. 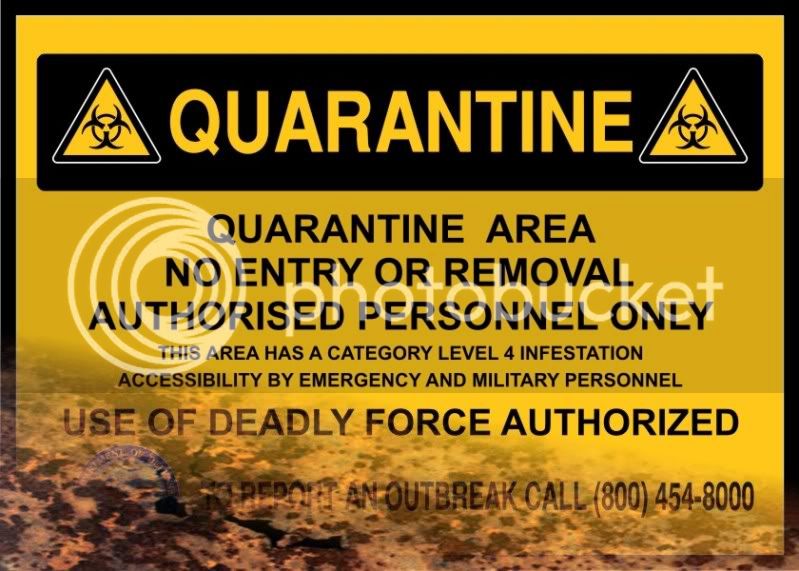 I was getting ready for work when I found out. After that... I didn't really think that filling out paperwork was all that important at the moment. I decided to head outside and see what was going on. It was chaos. People were rioting, fighting each other, the police, the military was there... I didn't know what to think. But it didn't matter. Before i could stop to make sense of any of it, I started to feel sick. My vision started to blur, and my stomach wretched. I collapsed there, and woke up on a stretcher in the hospital, being wheeled through the halls, filled with other sick people. I couldn't think straight, and the last thing I remember is someone putting a breathing mask on my face just before i passed out again.

When I woke up, it was dark. There were lights, but they were very dim, much more dim than they should have been for a hospital. I looked around, and saw that there were others in the room, all laying in beds like me. They all seemed to be just waking up as well. Where are all the doctors? The nurses? I had an IV stuck in my arm, but there was nothing being pumped into it, the bag was empty. What in the hell was going on? It was far to quiet for a busy hospital...

Original poster
This RP takes place on Manhattan Island, New York. You wake up in a recovery room with other survivors on the 6th floor of Lenox Hill Hospital. Your objective is simply to survive, and you are free to choose exactly how you want to go about achieving that goal. There are a few special rules for this RP, and here they are.

2: You are not allowed to find meaningful supplies, such as weapons, ammo, medical items, ect. without the presence of these items being already stated by the GM. However, making weapons out of objects provided in the environment, such as breaking the railing of a wooden staircase and using the peices as blunt weapons or anything like that, is permitted. Defined weapons, such as guns, blades, and specific blunt objects (like a baseball bat or crowbar) must be 1st revealed by the GM in order to obtain.

3: No magical abilities of any kind whatsoever are allowed in any way, shape, or form.

4: Your character is not allowed to have been directly involved in the catastrophe that caused all of the monsters to appear. No player can automatically know why the monsters are there or where they came from.

5: Melee weapons will degrade over time with use. This degradation will be defined by the GM in various posts throughout the RP. Guns will not degrade, but ammo will be limited to what you can find.

6: You cannot have pinpoint perfect aim at all times. I don't care if your character is a well trained soldier from the military who knows how to use guns properly, or any other explanation one might have for it. I plan to be lenient with this one, but if i notice that someone is constantly landing headshot after headshot after headshot without ever missing, and they're doing it while running in the opposite direction or something crazy like that, i will be forced to take control and change the trajectory of some of the bullets. Keep in mind that i'm not saying you aren't allowed to be able to aim well, i'm saying that if your character is not in a situation/position where proper aiming can be used, then don't post as if they're some kind of super marksman who can land consecutive kill-shots without even trying. It's an apocalypse, not a trick-shot competition.

Character sheet needs to include:

Anything else you'd like to include in the profile like Personality or something, is up to you.

I ask that you only join this RP if you plan to be rather active while in it. By active i mean, posting at least once a day if at all possible, but no less than once every 3 days. If you happen to be unable to post for some reason for an extended amount of time, just let me know and i'll work something out to keep you alive in the RP while still letting it move along. However, i ask that, aside from those occasions, you remain active throughout the RP. Failure to post after several days, if done repeatedly and without warning, will get you kicked out of the RP.

New players are still allowed to join. Just PM me about joining and i'll work with you on how to get you put into the action.
T

Original poster
I'm in, I'll see what i can make up.

Name: Scarlett Quinta
Age: 26
Appearance: She has flaming red hair, redder than most. It is cropped short, being closer to a pixie cut than shoulder length hair. Her skin is a very fair and along her cheeks and the bridge of her nose are hints of freckles. Her eyes are a bright leaf green color, accented by long low hanging eye lashes. She has a scar that runs down her left cheek and ends at her jawline; the scar runs vertically down her face. When she arrives at the hospital she is wearing a pair of skinny jeans, red leg warmers, a thermal long sleeve shirt and a puffy white jacket. The jacket and leg warmers have been removed as she lays on the bed.
Brief History: Scarlett has been living on the edge for some time now. She barely can hold a job down and pay off her apartment rent. Her last job had been well... Selling her body to anyone on the streets. But before that she had a job as a janitor at the local McDonalds. She too had stepped out of her apartment and had been instantly struck with the illness. Rushed to the hospital all Scarlett can remember is the mask being put on her face before she saw darkness.
A

Brief History: Born in New York with parent of asian decent. As a young boy Kei always dreamed of being one of those cool guys in movies, so as a present for his eighteenth. Kei was trained with a black op for a couple of months. As an adult however he works as a mechanic, fixing machines and cars. Has ended up in the hospital as a result of inhaling to many fumes from a gas pipe resulting in him fainting.
T

Brief History: Lorieli was born in Roseboro North Carolina. However she did not stay there for long. She dreamed of moving to Manhattan, and eventually she did. Though she had only been living there for only a week, when they chaos began to unfold. Dreams of going to college, and getting her nursing degree vanished.
5

Brief History: Yunho was born and raised in California and moved to pursue a career on broadway as an actor. As a kid he was mostly interested in movies and the stunts they did which inspired him to take taekwondo. Now at the age 23 he is a third degree blackbelt and was still increasing his skills as his acting career grew. When the virus hit he went to the dojo to let out frustration as he heard both his parents suffered, while fighting another man it was reported that he just suddenly collapsed on himself and bled from his nose from the impact.
R

Original poster
Name: Jay Smith
Age: 19
Appearance:
He has Black hair and a musclar body, he is a average height and his hair is short and spiked at the front he is lightly tanned and has a narrow face.

Brief History: Moved over to the big apple when he was only 8 and grew up there now 19 he finds himself in hospital with no idea of what happened in the last 48 hours, he doesnt know why there is so many people laying next to him left and right, but he knows theres something wrong. (He will be trying to find out why he has no memory)

Hope this is ok
J

Brief History: Celeste was born and raised in Arizona. She lived with her parents and her little sister, Rhyme. When Rhyme died in a car accident that Celeste caused, she was devastated. Celeste had to get away from the many memories. So she moved to Manhattan in hopes of getting over the loss of her beloved sister. Soon after she moved, the madness began. Celeste soon caught the illness and that is why she is in the hospital.
K

Original poster
A great turnout so far. Still got time until it starts, and i will be accepting new members throughout the RP unless stated otherwise.

Original poster
The IC thread has been created and can be found here: http://www.iwakuroleplay.com/showthread.php?t=7642&p=181340#post181340

This means that the RP has officially begun. New players are still welcome to join. If you join after this moment, just send me a PM about it and i will work with you to get you inserted into the action.
K

Original poster
TheFoxMaiden has informed me that she will be unable to post for a few days. Because of this, her character will be controlled by me until she can return, and will simply follow along with the group and perhaps provide simple support. This is to prevent her from being left behind while still allowing the RP to move forward in her absence.

I'm sorry everyone but I can't find a lot of inspiration for this roleplay and will have to step out. I hate doing this, but I honestly can't seem to summon anything creative. Again my apologies.
K

Original poster
Alright well, i hereby declare this RP officially dead. Just about everyone seems to have lost interest in it. Can't keep an RP going with no players posting. Thanks to whoever is/was actually still interested in it, but i'm afraid it just wasn't enough.
Show hidden low quality content
You must log in or register to reply here.
Share:
Reddit Pinterest Tumblr WhatsApp Email Share Link
Top Bottom