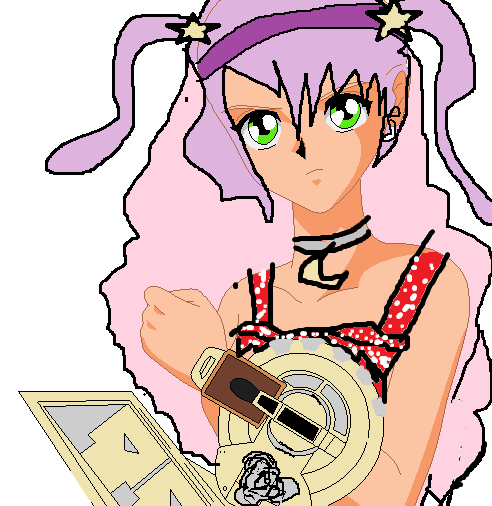 Girl OF Many Dreams
~~~~~~~~~~~~~~~~~~~~~~~~~~~~~~~~~~​
So the new school year had started, and Anastasia was anxious to open the new academy to the public. Years after seto kaiba opened the doors of his duel academy, Siegfried and she were finally able to open theres. Anastasia continues setting up, and watches as the plane containing the students lands. She puts her best face on, and goes to the Microphone Podoium."Hello and welcome to Stromberge Duel Academy- i am Vice Chancellor Anastasia, and this is Chanceller Leon. We are proud to announce that our first school year starts now! everyone head to your dorms, and have a nice time!" Anastasia finished, before walking over to her Castle Gold Students. "Well off to your dorms we go.." she said to them, walking off.​
T

Original poster
"Alright, time to take this new bike out for a spin." Seth said excitedly, his new bike had just been modified and his shop was closed for the day, so what better thing to do than test out the new ride. Seth opened up the garage door and started up the engine, the engine stalled momentarily then began to roar ferociously, he took his foot of the ground and rode towards the highway. It was smooth sailing for the most part until the sky turned black, "This can't be right. the forecast is never this wrong." He sighed as something similar to a bolt of lightning struck and left a weird looking portal, "I can't stop my bike, this is going to suck." Him and his bike flew through the portal. It was dark for a while until a flash of light appeared and he ended up face first in the grass with his bike next to him. Seth gets up and looks off into the distance he couldn't tell where he was. He turns his attention to the other side and saw a moving mass of people, "Maybe one of them will know where I am." He flips his bike and starts it up again slowly driving over to the group of people.

Mathias Von Schroeder, the younger adopted 5 year old brother of Leon, Anastasia, and Zigfried Von Schroeder comes outside to where Anastasia and Leon are and joins in walking alongside Leon and Anastasia listening to Leon explain the rules to the students of the Stromberge Dueling Academy in it's very first year.

Leon "So here are the rules for the academy. These apply during school in class, after school inside or while hanging outside of your dorms after classes, during duels that you face off in with one another. ect..and they are to be followed. And they are pretty standard and simple. So there is no exception to following them. If you break a rule you will be punished.
Rule 1. There is to be no fighting.
Rule 2. No Cheating.
Rule 3. Everyone is to respect each other and their teachers. And us who run the school too of course.
Rule 4. Keep a tidy and cleaned area.
Rule 5. Don't take anything that doesn't belong to you from anyone else. Ask first when borrowing anything.
Rule 6. Be responsible. This means basically to always get to class on time, and to be properly prepared for class.
A

Original poster
Anastasia spokem, "Another thing... as with Duel Academy, crazy stuff may happen soemti9mes. Always be prepared tofight for the fate of the world." Anastasia was laughign inside at tghat because she probably just freaked out a lot of freshman.

Mathias heard about the strange occurrences that struck duel academy, such as what happened when the shadow riders struck the Duel academy school. Thinking about the shadow rider incident that struck Duel Academy sent a few chills down Mathias' own spine, much less the freshman who got scared hearing that from Anastasia. He looked behind at the joining students, knowing there were several sets of transfer students from the upper grades of other schools who joined the Stromberge Dueling Academy that year, a set of students from North Academy were there, some from South Academy were there, some from East Academy were there, and some from West Academy were there. But the transfers only amounted to 300 of the students, and Mathias knew that all the rest were freshman, the freshman equaling up to about 500 students in total. Mathias saw that a half of the freshman students got a bit on the nervous side due to hearing Anastasia say that just now, but from the other half of the freshman, Mathias saw in some of the students faces that if they were fazed they didn't or wouldn't show it, instead they would just be careful, and then the rest looked as if it did peek their curiosity a bit regarding what Anastasia said to them, but they didn't think that was enough info to go on.
A

Original poster
Anastasia looked relieved she hadn;'t scared the freshm,an too much. "Anyway- we also have rtransfurs from duel academy so please if you see jaden yuki or alexis rhosed or chazz princeton or bastion ikisawa or syrus around please say hi to them.. Additionall;y we have Johan anderson and jim cook and axel broady as well from north, east and south acaemy. They can tell you a lot about dueling that you freshman may not know." Anastasia then arrived at the dorm~ This is the Castle Gold doprm only for the elete students. anyone who is in this dorm may stay here and pick a room. the rest of you, follow me onwards."

The freshman nod to her at saying hi to the transfer students if they saw them.

Mathias hearing her nods as well.

The freshman then, as they arrive to the dorm for the elite level students, the freshman that are staying in that dorm take off towards it.

The rest of the freshman follow on with Anastasia and Leon as instructed to do.

Mathias follows after his older sister and older brother too.
A

Original poster
soon we wreached the Fairytale Blue dorm. "This is where the smartki that didnt go to prep school stay....... you dont have to be prerfect at dueling.~the dorm is not much diffent, just another color~ "You may all stay here. the rest of you freshman, cpntinue following me.'

The freshman who are staying in the Fairytale blue dorm head towards it, and the rest follow on with Anastasia and Leon leading them to the next dorm.

Mathias follows his sister and his brother and the rest of the freshman that are left with them.
A

Mathias watches as the last of the freshman head off to the Rose Pink dorm. He himself stays at Anastasia and Leon's sides.
A

Original poster
"So voice concerns- who thinks a great evil is coming?" Anastasia asked, she ahd to theorw it out there now that the freshman were all in their dorms. Maybe somone else of us had had the same forbidding dark feeling that Anastasia had pof chaos to come in huge gaps.and a force stronger then the darkness.

Mathias "Well I feel something..But I don't know exactly what it is..It's kind of far off though.."
A

Original poster
"i have a horrible feeling however and its sorta frightneing me.." Anastasia said glancing aroujnd

Mathias "You do?..Um.." After hearing Anastasia say that, Mathias, having been feeling nervous anyway when he didn't know if he was right or not, moves closer to her side and helps her look around but stays close to her.

Leon notices Mathias moving more near Anastasia, and moves over to further also to help shield him from harm unless need be, seeing the obviously already nervous and starting to be afraid look coming over Mathias' eyes. He then helps to look around as well.
A

Original poster
"Whatever the case w we shouldnt let it egt to us right?' Anastasia said, visably shivering

Leon, as he stands at their sides and tries to comfort Anastasia and Mathias, Leon says to Ana "Don't worry Anastasia. Everything will turn out fine. I'm sure of it."
Show hidden low quality content