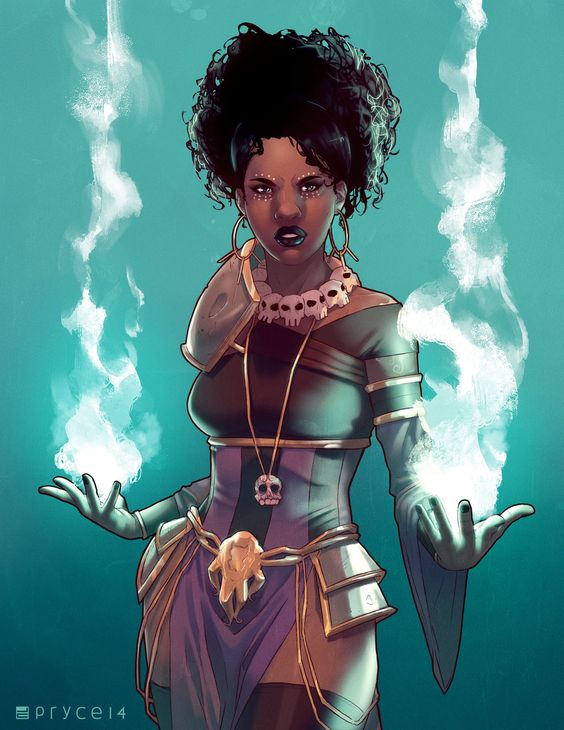 Age: 55 (looks young due to tampering with black magic)

Occupation: Mother and secretly a teacher of black magic

Personality: Diana is strict when it comes to teaching, and is usually strict when also raising her children, but that doesn't mean she isn't also a doting mother at times; she just doesn't spoil them.

History: growing up in a small tribe in the desert kingdom to the east of the Kingdom of Regalus.

Equipment: A hidden dagger and a silver pendant with a blue gemstone she keeps hidden on her until it can be given to her daughter when the time is right

Abilities and Skills: Has high and potent magical energy that runs in the family, as well as basic swordsmanship skills.

Weaknesses:
-Novice swordswoman
-Her children (don't touch her kids unless you wanna die)

"This...this is just a big misunderstanding!" said the vampire, its hands in the air waving frantically.

"What, you sucked my nephew's blood thinking it was lemonade?" Ama replied sarcastically, the fire blazing in her palm.

"Well..." the vampire said hesitantly "...it was more like orange juice."

Personality: crass, harsh and hard to read. One is never quite certain where they stand with her. She rules through dominance and fear unashamedly.

History: She rose to the throne when her father was murdered by a neighboring planet's scouts. She was but a young girl at that time and those who thought to end her easily learned quickly that she was as unlike her father as the sun is a black hole. She is vicious and without mercy when anyone attempts to enter her kingdom with hostility in mind. She's repelled five such invasions nearly single handedly through her powerful magic affinity and control. In spite of her reputation she has a few loyal allies, and she has protected them on three separate occasions. She is currently in the midst of negotiations with the interplanetary federation concerning her kingdom and it's autonomy. They have been thus far infuriating and insulting to her, but her advisers have cautioned her against making an enemy of an entire federation of planets. She however thinks they should be worried about making an enemy of her.

Equipment: She wears a magic magnifying golden hand as a belt. which most take as a fashion statement.

Abilities and Skills:Her magic has world ending power, she can control and move suns and planets from their orbit. She had honed her skills to include the ability to change the flight path of ships others use to invade her planet and finds pleasure in forcing them into the gravitational pull of a sun or black hole. She has the ability to steal a physical body's life force and draw it into her own, making her age completely indeterminable.

Strengths: decisiveness, strong will, loyalty to those who prove loyal to her and her people, generous ruler of her people, just in her dealings with them.

Weaknesses: Short fuse, quick to judge sometimes without the entire picture in place.