Wheel of Time: The Land of Madmen

Original poster
Game Masters: Fel +1
Accepting New Characters: Yes
Posting Expectations: I'm on a rather loose schedule with this one, I don't expect a million posts a day, but they should at least be once a week and meaty enough to be enticing.
Rating: Possible pg-13
Genre: High Fantasy
Atmosphere/Mood: Serious, discovery (meaning adventure!)
Plot Flow: Semi-linear
Timeline: Nonstandard timeline.
Basic Plot: The Wheel of Time turns, and Ages come and pass, leaving memories that become legend. Legend fades to myth, and even myth is long forgotten when the Age that gave it birth comes again.

Such is the beginning of every tale on the wheel, such is our's. Rand al'Thor's conquest of the shadow is still but a memory, the man himself still living, fifty years of age, still arguing with Lews Theron Tel'amon, the dragon and the dragon reborn sharing a head. Rand al'Thor, however, is not important to us. Nor are his three wives and two children.

This is a new age, an age of discovery. The sea of storms has calmed due to the calamity that was Tarmon Gai'dan, and the madness of Saidin long gone. An adventure south we shall go, to the land of madmen, where not even the Athan'Mier go.

Such a trip has never been taken, such a trip is yours to take, and as they say:
"Time to toss the dice"


The tank role: warder, wolf-brother, it doesn't matter as long as you're strong.


The mage role: Aes Sedai or Asha'man, either can have a warder so that would work best.


Misc roles: anyone else has a free gamble at what they want to be. I'm thinking at max there should be two of each type.

Original poster
It may take me a couple of days to finish him.


Character Name: Johanin Thane
Gender: Male
Job/Role: Asha'man
Age: 28
General Appearance: Thane is tall, almost as tall as an average Aielman, and well built. he wears his black hair short, and has deep green eyes.
Current Goal/Purpose (optional):
General Personality: Thane is generally quiet. he usually tries to stay unnoticed, nostly becaue of his ancestry. He doesn't hesitate to help others when the need arises though.
General History: Johanin Thane is of pure Manetheran blood. his father's ancestry can be traced back all the way to the origional Manetheran. His mother is of pure Ghealdan blood. He has always been proud of his ancestry. But Johanin Thane has led a difficult life. His father is the son of a former officer the Legion of the Dragon, who fought at Tarmon Gai'dan. His mother is the daughter of Logain Ablar. His brothers were all Asha'man, and his siters were all Aes sedai. Samel always had great expectaions thrown on him. He fervently believed that he did not have the ability to channel. When he was sixteen, and shortly before he was to be tested by the Asha'man, he ran away and joined the legion of the dragon. Three years after he left home the seanchan attempted to conquer Tear. the Legion was personnaly lead by Ran Al'thor himself. One of the accompanying Asha'man noticed Thane and shortly after a battle tested the young man. The Asha'man was shocked at how powerful Thane could become, and even more shocked to learn that his grandfather was the M'hael. Thane was taken to the black tower that day. He came into his new abilities quickly, an soon became known for his skill in healing. Thane grows tired of the black tower though, and tired of the constant wars that keep cropping up.<o:p></o:p>
<o:p></o:p>

Original poster
I NEED TO GET IN ON THIS.

Character Name: Krin
Gender: Male
Job/Role: Asha'Man
Age: 23
General Appearance: Black hair and deep blue eyes, he is of average height and build. He has no truly remarkable appearance, yet those who know him have always noticed the small smile he seems to have, as if he always found something amusing. He has a light, tan skin color, from having been out in the sun most his life.
Current Goal/Purpose (optional): His goal is to simply strengthen himself and learn to wield as much Saidin as possible. He also aims to master many weaves, and plans on becoming a mercenary of sorts.
General Personality: A kind man, he understands the needs of others, and generally helps those less fortunate quite often. However, should one of noble birth seek aid, he has no qualms about earning some gold while doing so.
General History: Having been raised by a merchant family, Krin knows the value of money. He is always in search of ways to earn it, though he will never resort to theft for personal gain. He left with the goal of entering the Black Tower, when he saw his family's business was on the verge of bankruptcy. As of late, he has done various jobs, sending many of his earnings to his family, keeping the business afloat.
C 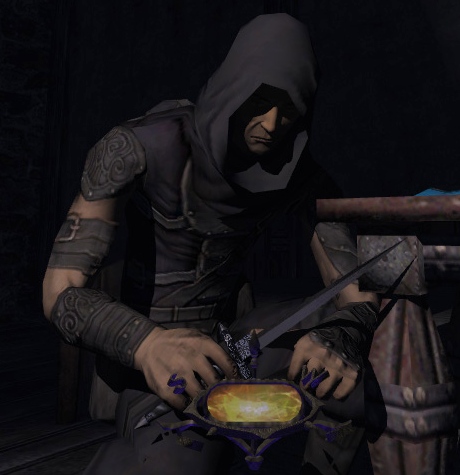 General Personality: He usually keeps to himself, generally sticking to the shadows and watching others. He is not very talkative, even to people who he is close to, but he has a wide range of grunts that signal agreement or disapproval.
General History: Moghe grew up in a moderately well off family in Tear. His parents never really paid much attention to him, so he was left to his own devices. He befriended some of the kids outside of Tear's walls, learning how to steal from them as well as how to evade detection from guards. The more time he spent with his friends, the more he became alienated from his family. He would be gone from home for days, some times weeks at a time. One day when he came home, he found his parents dead - he had stolen from the wrong person, and that person managed to find out who he was and had exacted his revenge upon Moghe's family.

Moghe felt nothing for the loss of his parents. He had spent so much time away from them that they were practically strangers to him, but he had gotten the message - he needed to stay away from Tear for a while. He ran. He stole a horse outside Tear, and just kept going wherever the wind would take him. He would steal what he had to, never anything of enough value that it would be noticed. He spent the next ten years on the move, never staying in one place for more than a week, lest he be caught stealing.
F

Original poster
Three people so far...! I've got all my casters so...
M

Original poster
The One Power FTW.

Original poster
I WANT THIS TO LIIIIIIVE~

Original poster
Oh balls, I just realized I never finished filling out my character sheet. *writes himself a post-it note for tomorrow*
T

Original poster
Are there no Aiel in this story?

If not, I could roll a Warder but I'd love to be an Aiel.
F

Original poster
After Tarmon Gai'dan there aren't supposed to be a whole lot.
T

Original poster
I'm well aware of that. "The remnants of the remnants" and so forth. But there are still Aiel and it wouldn't be far fetched to have one attach themselves to a wetlander. Gual, Bain and Chiad are a few that did, they held ties to their clans and septs, but rode with the folks they liked. Either way, I can fit an Aiel into the picture if you're cool with it, otherwise I'll roll a warder.
D

Original poster
I am sorry, i know this was supposed to be done last night, and I know it is horribly written, but my character is finished.
F

Original poster
Ah, no I'm cool with it! I'd be interested to see what an Aiel would do on the high seas!

And, Okami, it looks fine to me.
C

Original poster
Ok, I finished up my character sheet. Let me know if anything needs to be changed.
F

Original poster
What's he been doing his adult life? Has he ever been caught stealing?
C