INTEREST CHECK Tur'skelu: The Circus in the Shadow Between Worlds 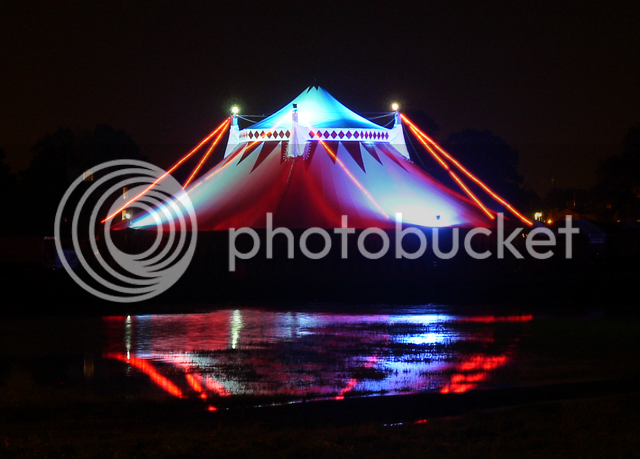 ~Hidden between the worlds of the multiverse lies a world that sometimes haunts your dreams. Or your nightmares. Dark tents, colorful lights, strange and terrible things wait just for you. And now you're here. You don't know when. You don't know how. But one night you woke up, and the dream became reality. Now, with no way home, the only thing left to do is explore, and hope that you might one day awaken.

Tur'skelu is going to be a dark mystery/horror game that I hope to bring back to life on these fine boards. I've got a few of these ideas with the theme of "the space between time/worlds" that I plan on doing, and this is the first of them. I'm looking for people to play new visitors mostly, although there will be a few spots open for people who have taken up working at the circus.

The horror is going to be a lot of psychologically based stuff, blurring the line between fantasy and reality, not as much gore and death. However, that doesn't mean your characters are immune to death. I don't plan on offing characters left and right, and I want deaths to be dramatic and plot relevant. I'm open to helping people come up with ideas and actively encourage them, as I will use your ideas to weave into a bigger, better plot.

Godmodding will NOT be allowed. I will be playing NPCs and the universe itself trying to harm you, but there will ALWAYS be a chance for your character to react.

Original poster
Sounds pretty interesting. Since it is a place between the multiverses sort of thing, I imagine character creation is pretty broad.
I'm interested. 4 - 6 players is a comfy, fair amount for a group rp.
L

Original poster
That's exactly why it's a multiversal setting! Good to see that a few people are interested, and if I can drag Zeon over here to check now and again, I might get him to join, too. For curiosity's sake, what type of characters do you think you'll play? Don't need to put up full profiles yet, just a quick preview would be excellent!
S

Original poster
Hmmmmmmm.
I have a soft spot for creature-girls, female monsters or simply any sort of creature.
Usually when character creation is free as that, I come up with some sort of shapeshifter or something beastlike.

Regarding personality.... That gets harder for me to tell. I usually work it out as I go with my character, and can't say much until I get started with the rp. I have a tendency to counterbalance the other characters, meaning, if there are mostly females, I'll roll up my sleeves and play a male, and if they're mostly badass tough guys, I'll play the overly-emotional or hysterical sort. But that depends, too.
L

Original poster
You are a lady after my own heart, Selenite! In the original version of this roleplay, there was a shapeshifter zoo that was the center piece to the circus. There still is one, but I wanted to expand the rp out to include other things and make it more welcome for different rpers. But if you feel like playing a circus member, here's an idea: The dreaded Beast Girl, tamed before our very eyes! Come see the wild and ferocious creature face down our best trainer!

The main NPC I'll be playing is the ringmaster, though I'll fill in any slots that may be necessary.
S

Original poster
*stares back at Lycan Queen with shiny eyes, and raises hands*

I'll shoot you a PM in a while.

Pity, Biological Sciences will have to wait a bit longer for me to study them.
I HAZ RP BUSINESS HERE.
L

Original poster
I'm glad you like the idea! I'm heading out to work now, so I'll be back in about 6 hours.
W

Original poster
*gives a warm smile* Visitors are always welcomed! Now that a bit of interest has been drummed up, an OOC thread shall pop up really soon! But there's still room for one or two more players, so don't be shy!
W

Original poster
Interest checked. Not that you don't already know this. But the world doesn't know what we talk about sitting at our computers...

Put up a char
K

Original poster
I'm actually interested in this. I've yet to figure out what kind of character I'm going to play...

Actually, now that I think about it, how about a character from a cartoon-type universe? One who's never had to deal with this kind of stuff, you know, from a place of sunshine and laughs. He might have a small degree of cartoon invulnerability though.
L

Original poster
@Jack Shade: Oh there's popcorn, cotton candy, all kinds of goodies awaiting you! All you have to do is just step right up, and take a dive into the land of dreams and nightmares!

@Hejin: A cartoon universe, huh? I think that'd be a wonderful idea! =D