AshenAngel said:
The fresh smell of cinnamon, freshly baked apple pies, pinecones, and alcohol all mixed together in a wondrous scent rush into your nose was you swing open a wooden door with a iron door knocker in the style of a lion's head. Oddly, the building seems gigantic compared to it's tiny appearance on the outside. Wooden tables crafted out of the finest local oaks are set in rows with four wooden chairs at each of them. There is a long bar and counter running down the wall to your right hand side. Behind the counter you see a man who, oddly enough, had a pair of bat wings and a feline tail, cleaning up some empty glasses and plates. Suddenly to the left of you, you hear a clear and strong voice. You turn to face the speaker, and notice a young woman with black cat ears and a long sweeping tail that flicked every now and then.

"Hello and welcome to Tilly's Tavern & Inn. You must be new here. I'm Aluro Tilling, the owner of this place. If you are looking to have a drink or fresh meal just sit down and a one of our workers will be sure to get your stomach filled, but if you are looking to stay a night or few in one of our rooms, please be sure to sign your name and the number of nights you shall be staying upon the chalk board over towards the staircase."

You glance over at the staircase toward the back left-hand corner and notice a large chalk board. At first you find it a bit childish, but then you notice that the pieces of chalk have a glowing aura around them and write on the board by themselves. Instantly you realize that it is a enchanted chalk board, one that keeps records and remembers the data forever even if the words are erased. You give a thankful nod to Aluro before doing whatever you need to have done; have a drink, enter your name on the board, or both.

hello. How do I join?

Dude, chill, still making the thread and you just screwed up my whole layout plan.
R

In order to join, read the rules and fill out the character sheet!!!

Tilly's Tavern is now hiring new staff and opening it's doors to some new patrons! Come get some beer and a room while you can!
Click to expand... 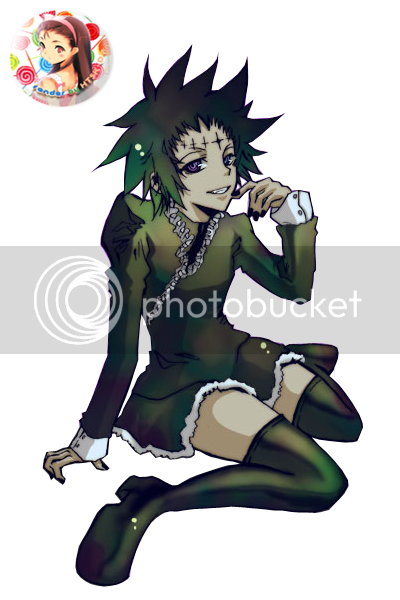 Personality: Jinx is of course a jokester of sorts. Loving to pull tricks that may or may not cause harm. She has a fondness of other dolls and stuffed creatures. She enjoys taking off her head and limbs by choice and preforming tricks. She once had an innocent mind, but she's grown up a little since she's been around the tavern. Her childlike innocence has turned rotten, however. She has no concept of "evil" or "wrong". While she will often stops if scolded she only has a conscious knowing of happiness and what's fun for her.

History: Jolly was originally born 17 years ago in a happy family. She was a normal girl that loved her dolls. She was casually playing with her dolls on the back of a cart as her parents were moving more inland. Her father was proficient in making dolls, and was going to try his craft in the city to see what money they could make. There were two carts and Jolly was on the back of the first. She was supposed to stay on the front of the second with her uncle who was helping them move. However, she snuck onto the back right as they were leaving since it had more room for her to play. She was casually playing, but as they stopped in what would be their new house, the sudden stop knocked her balance off kilter. She fell right underneath a horse hoof of the second cart. She felt no pain as she died as the horse hooves cracked her skull on impact. A few (7) years later as the parent's grieved like parents do, her father made a life size doll modeled after what he thought she would look like today. He put it up in the shop window for viewing. He went back to tending to customers and dolls and such. After a while he looked up when he heard the bell to the door open. It was a busy day in the street but it was odd to see that no one had entered. He swore he saw a familiar plastic face pass the window next to the door. He ran to look, only to notice the doll he put out was no longer by the window. Jolly travled for a while. The new limbs clunky and cold, and the new area inviting. Her mind was fuzzy as she walked. She eventually found the Tavern after days of walking. Her mind, in a much stronger place, decided it'd be a funny place to make home. Her memories dim and strange, she thought her name was Jinx.... not Jolly.

Casually:
When being unknowingly evil:
Demented(if she ever learned true rage/sorrow and reacted out of it):

@AgileAkita, please don't take this personally, but doll characters creep me out. Like, horribly. As in, my blood pressure spiked upon reading your character sheet. Also, unless I completely and horribly messed up where I put this thread, this is a modern fantasy thread. Carts aren't around anymore as a mode of transportation. Even if your character's parents waited until they were old and decrepit to make her doll, and please please please for the love of whatever is out there don't change her history to this, they wouldn't have made her in the right time period for her to fit into this rp. Now, I love the fact that you made a character that scares the crap outta me, but she simply won't fit into this rp. Also, a kid in a bar setting doesn't sit well with me.
K 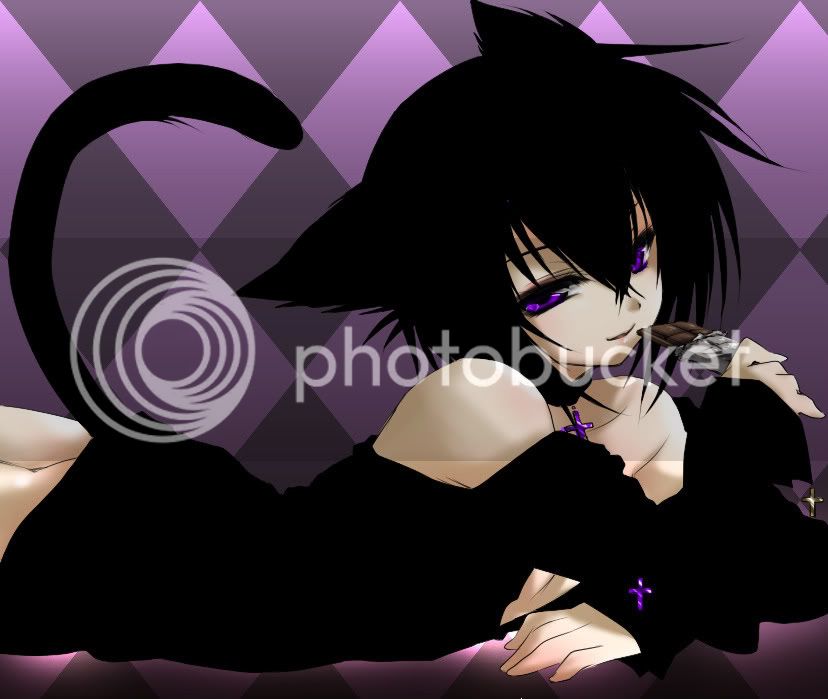 Name: Karin (has no last name, she changed her name and dropped it the last name when she was bitten)
Nickname: is fond of being called Jade (which was her name before she was bitten but she doesn't remember that)
Gender: Female
Species: Vampire Neko
Age: Unknown (looks about 20)
Position at Tavern: Guest, but helps out when short staffed or when in need of money, being a maid or waitress.

Personality: She's active, doesn't really need sleep but desperately craves alone time often, so she keeps a room at the inn to escape to when the tavern becomes to crowded. She has a major weakness for chocolate to the point to where she will do nearly anything for it, even at times risking her life, although she always regrets it later. Pretty much only wears black and purple, she loves how the colors go together.

Although she's a vampire she's disgusted at the thought of feeding off of a living creature, so she often buys bags of blood from the blood bank, but if badly injured in a fight she'll feed of the nearest animal (such as deer, but not animal people like other nekos), although she despises fighting so she isn't often involved in them.

Yes, she can go into the sun, No she can't turn into a bat, those are both myths, at least with her, she's never met any other vampires, not even the one who made her.

History: She was born a neko, named Jade Ashbrydge but was bitten by a vampire and turned around her 20th birthday, she assumes, she can't recall how old she was when she was turned, but assumes she was around 20 because thats how old she looks to herself, she can't recall how long ago she was turned, she never kept count of the years, as the first couple of decades were spent in a "drunken stupor". She really has no history she can tell, when she was turned she lost all her memory and never regained it, she has random flashbacks of it, but it never stays and it gives her hellacious headaches when it happens.

Name: Marlena Andrews.
Nickname: Marli
Gender: Female
Species: Werewolf
Age: 26
Position at Tavern: Guest, possibly security guard if needed
Personality: Marli is almost perpetually angry, but not unreasonably so. She is fiercely loyal to those who are good to her, but she has a tendency to push everyone away simply because she's a bit of a loner. Sarcasm may as well be her middle name. Marli would never say no to a pint of beer. She has a very strong hero complex, if she sees someone breaking a rule, she'll jump right into action.
History: Marli has always kept to herself. Before her transformation, she was just your average, angst-ridden teenager. Her girlfriend in high school was a completely clueless werewolf. After an unfortunate hickey gone wrong scenario, Marli walked out changed forever. She hadn't seen the girl since, but if she had she would probably knock her out for giving her this horrible "curse". Since then, she has never met another creature. Until of course, she woke up in the middle of a forest after a particularly eventful full moon. Now if only she could remember just how she got there.
Themesongs: Lorde- Everybody Wants to Rule the World

Note: I'm really bad with descriptions but I swear I'm better when it comes to interacting!

I'm terribly new to this site, so forgive my ignorance, but is there already an open in character thread I can jump in on?

Name
: Akiha Mori
Nickname: Aki
Gender: Male
Species: kodama (Japanese tree-spirit)
Age: 100 human years, Looks 25
Position at Tavern: bartender?, waiter
Personality: He doesn't condone violence, unless you touch his tree, if you do you're a deadman. Aki is fiercely protective of his tree because if it was destroyed he would die.He's a loner and doesn't have very good communication skills, maybe because all of his friends are plants. He is very calm most of the time. He always has a red maple bonsai with him.
History: Akiha grew up in a forest, surrounded by other red maple kodamas. As he grew older he began to become more curious about the "outside old" that he had heard about from the other forest inhabitants. He soon learned that he could leave the confines of the forest but only if he had a living part of his tree with him. Which is how he found himself at Tilly's Tavern.

@Adonai, accepted, but only as a waitor. My charrie's the bartender around here.

THE IC THREAD IS UP AND RUNNING, POST YOUR INTROS NOW!

@Kila'Fali, @Ciel, WAKE UP KIDDIES, THE IC THREAD IS UP AND RUNNING AND IM WAITING FOR YOUR INTROS!
Show hidden low quality content