Original poster
The marooned sailors' salvation comes in the form of an abandoned merchant vessel.

Scratched onto the door of the Captain's Cabin are the words Lord, Have Mercy.

Chaos is the natural state of the sea.

Appearance
Walters has brown eyes and blonde hair that has recently become a shaggy mess. A squared jawline lays hidden beneath two months worth of scruff. He stands at about 5'6" with a fit build that is beginning to show signs of being underfed.

Bio
Until recently Daniel Walters was a Midshipman in the Royal Navy. Two months ago his ship was attacked and he was press ganged into service aboard the pirate vessel Hades' Hangman. He participated in the attempted mutiny and was marooned with the rest of the dissenters.
Last edited by a moderator: Mar 21, 2016
A

Appearance
If there ever was such a thing as a dirty redhead, James would be it. Nearly 5'7" depending on whether he slouches or not, he stands at the prime of his life in terms of physique. A gingery, thin beard adorns his roundish jawline.

Bio
Born on a Transatlantic crossing and orphaned in Kingston, young James spent most of his life around ships and wood-working. He gained a knack for carpentry and volunteered for work aboard a pirate vessel. Recently, due to an attempted mutiny, James found himself in the wrong place, at the wrong time, saying the wrong thing. He was mistakenly marooned with the rest of the dissenters.
A 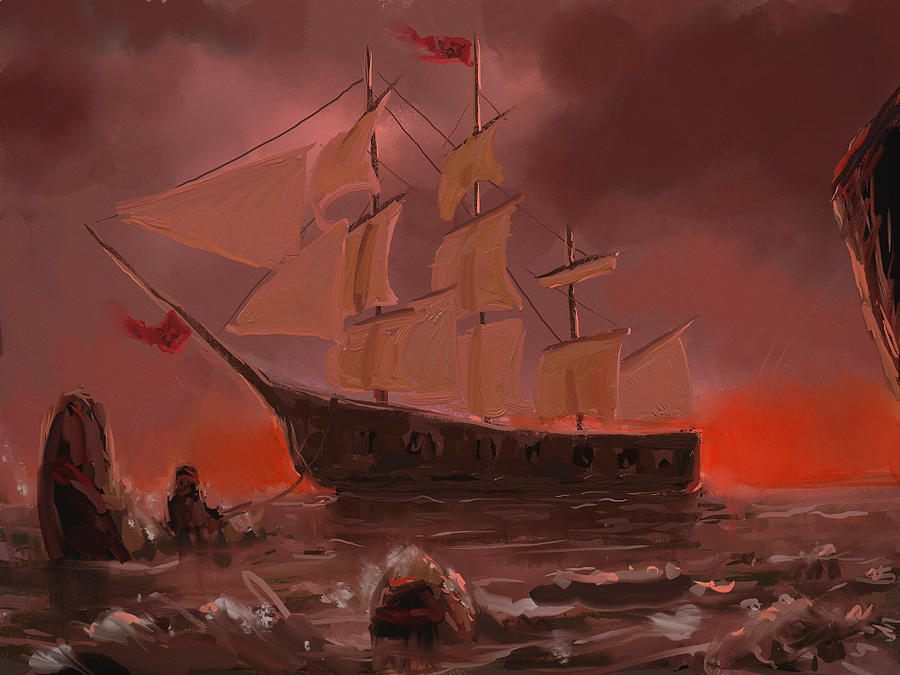 To any and all who reade this Missive, know First that I am sound of Minde. Though Treachery and Hardship ought to have taken the likes of me much sooner from this Worlde, I have befallen no such good Fortune. My life now lays in Testament. I warn you, dear Reader, whoever you may set out with Endeavor to finde Truth here must know it will not come in familiar Kind. It will seem as a Stranger in the Darkness, and show itself to be thrice as harrowing.

It was the Kyrie that bore our us to witness such new Truths...

"Oi, Walters. Come have a look." Hunched behind a craggy outcropping, James spoke in a low whisper. Making a gesture of following to the other man, he turned his gaze again to his find.

There, nestled in one of the island's stony harbors, was a ship. Her line was tied out to one of the stone sentinels jutting from the foam, and her masts were full with the cool breeze that whipped James' own gingery hair about his head. She was a slim falcon perched in a desolate cove. The wind whipping about her hummed danger to James' ears, though he could not make out movement aboard with his eyes. Not from this distance at least.

"Crew's either asleep or gone, from I determine." Turning again to look at his assigned compatriot, James made sure he was hidden enough behind the rock to not be seen if his words proved false. He was a scraggly son of the waves, and winburned to boot from his time marooned here. Their rowboat bobbled nearby, filled with what few necessities allowed them to try and hunt.

He had not expected to land such a whale as this ship on their outing today.

"Well, what do you think? Should we approach?" The words dribbled out with cautiousness. It wasn't so much that he respected Walters or trusted him; he just didn't want to be the one responsible for sending them in when danger might then follow back.
Show hidden low quality content