My character is an intersex performer in a traveling circus, deemed a freak for their possessing both sets of genitals as well as small breasts. Their mother was also a circus performer, a talented fire eater–a talent she passed on to her child. You would play my character's father and half siblings. Their father met their mother when the circus passed through their father's town for two weeks nearly nineteen years ago. He had a whirlwind romance with her, and his heart broke when she had to leave and he was unable to go with her for whatever reason (that reason is up to you). She kept her pregnancy a secret from him, and he was unaware of Ryan's existence as he moved on with his life. He married someone else and had two children with her (ages are up to you, I was thinking teenagers 13-17). His wife died shortly after the birth of their second child. Years later, he's having financial trouble, the circus he met his first love at returned to his town, and he takes his children in the hopes of finding that woman again, unaware that she died a year before. He eventually meets Ryan, and is offered a job with the circus, that job being kitchen duty. He accepts, and he and his children are thrust into the circus life. That's all I really have so far. This would be a family drama plot.

My requirements:
-Please don't join the RP, and then drop it right in the middle. If you have to, PLEASE tell me about it so we can work around you.
-Please be advanced or at least adept. At least four paragraphs per post with good spelling and grammar. This is a big thing for me because I tend to write long posts and I don't want just a paragraph back. I understand writers block and it's okay to have a short post every so often. I don't mind a few screw ups, but if you 'typ LIek diss' and don't use decent capitalization and punctuation I'll most likely drop the thread.
-Be active PLEASE. I would prefer someone who can post at least once a day, but I understand real life getting in the way sometimes. 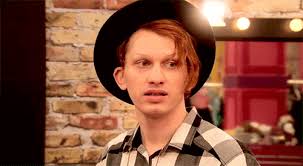 Ryan was born to Caitlyn Cirelli, a single mother, who had nothing physically different about her, but worked as the circus cook for years, as well as being a talented fire eater. When Ryan was born, she panicked. Ryan was born with both sets of genitals with only a single testicle. Their mother, not wanting to do something that could hurt them later, chose not to subject them to corrective surgery, and though she raised them as a boy, was very liberal with the things she allowed Ryan to do in terms of gender expression. Ryan never fully accepted their assignment as male, and is much happier to live between the binary genders. At puberty, Ryan's features became fairly androgynous, with small breasts budding on their chest. In terms of a menstrual cycle, they only bleed a few times a year at seemingly random intervals, but experience extremely painful cramps-to the point where they can hardly move-every month or so. Originally, Ryan's mother didn't want them in the show, not wanting her child to be anymore of an oddity than he already was. But Ryan, desperate to entertain people and be seen by the world, continued to beg until their mother caved. Like their mother, Ryan is a fire eater, but is also a talented singer and acrobat. In terms of personality, Ryan is very sweet and outgoing, traits helpful in their love of performance. Ryan's closest friends are Ivy and Lacey Summers, a pair of twins who are conjoined at the hip and were orphaned at a young age and raised by Ryan's mother. Ryan is also very close to Mara Severina, the circus strongwoman, who was their mother's closest friend. It is rare to see Ryan upset, as they try to hide their feelings until they are alone, but when they do have outbursts in front of others, its not very easy to calm them. Their mother died a few years back in an accident that led to her accidentally setting herself on fire, and Ryan is still not fully over her death. At times, Ryan is hard on themself. Ryan knows they are considered a freak of nature, and though they try hard to own that, there really are times that they absolutely hate it, wanting so much to be normal.