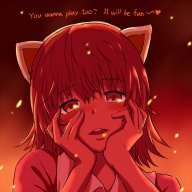 Okay, so my college is letting out like tomorrow and I'm going back home to see my family. That entire time the only thing I'm aware of (note my family loves dropping planned outings on me that they 'forgot' to let me know about) anyway the only thing I'm aware that I have to do is work (sigh)
So rather than be bored at the horrible crappy internet my parents have forcing me to play games offline because it cant handle that stuff I figured I'd start up an rp to enjoy. I figured two weeks of break, then I get back to school and will have about two weeks of basic 'heres how to remember all that animation you forgot about' relearning. Even after that nothing should really bog me down until finals, so I should have plenty of time to rp.
Sorry, tend to rant occasionally

TLDR
Got time, want to start an RP

The first idea is a superhero rp
The way I want this to run is for a series of short 'comics' where a player creates a villain and attempts to succeed in their plan (whatever that may be) the heroes attempt to thwart it fighting the villains henchmen and lackies along the way. Then once that finishes another villain is created (and controlled by a different player) and it starts all over again

...however I've had issues doing this in the past (in that no one ever wants to lose so either the hero finds out the villains plan in five posts then thwarts them immediately, or the villain keeps coming up with 'contingency plans' and never loses.
So instead I think that having everyone make their character including if they are hero villain or other, then running the story with a main villain baddy (myself) might work better.

Though if enough people want to try the mini-stories with a new villain each go then I'd be willing to give that a go again.

The second idea is an adventure rp. A group of adventurers is given a quest to venture into an old kingdom, the kingdom is the home of a powerful ancient vampire lord. This vampire holds control over roosts of dragons, packs of werewolves, an undead army, even mages and witches. He threatens the surrounding kingdoms, waging war with his forces.
The adventurers task is to reach and destroy this vampire, however his army and generals will stand in the adventurers path.


The last idea is an Arena rp where two or more contestants enter, and fight for victory. They believe they are fighting for fame, glory, and a magical macguffin which will grant them a powerful wish. However the 'controllers' of the arena are actually using them to further their goals.
The fights would be big, flashy, with the winner being judged by a jury (the people not fighting will decide the winner based on the posts)

I have more of a story planned out for the second rp, and the arena one I actually just thought of as I was typing this up XD
Anyway I'd love to see if anyone is interested in any of these.
If you want more information I'd also be willing to provide it.
Show hidden low quality content