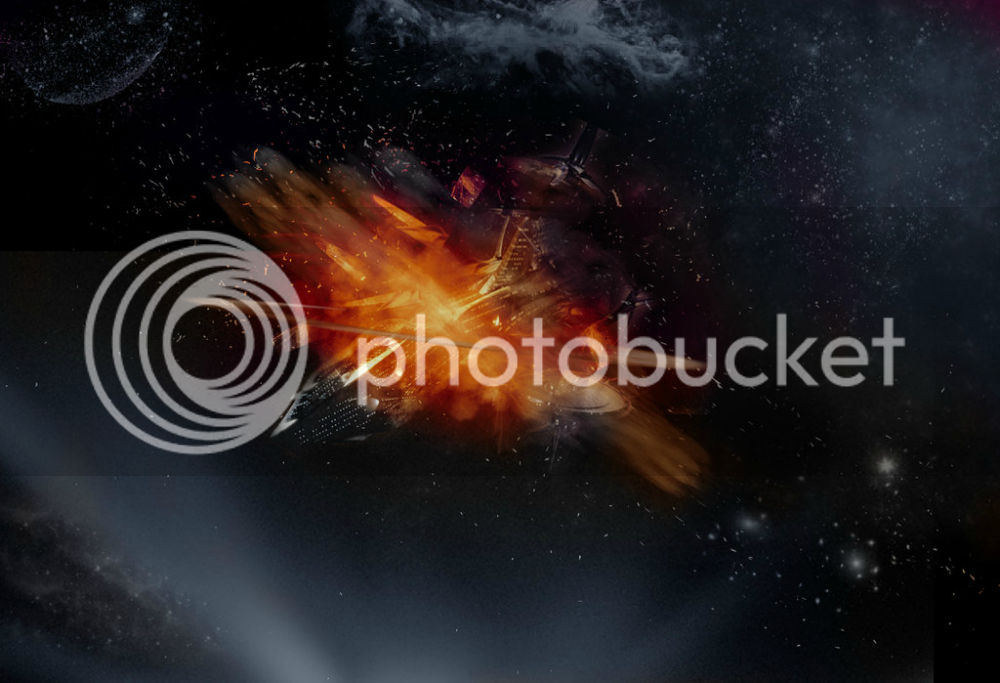 Never before had the Evil Eye Galaxy seen a meteor such as the one that smashed into the Spiral Serpent, destroying sixty-eight percent of the ship’s mass. The velocity rocked the ship as meteor debris busted through the exterior, spitting hundreds of passengers out into space. Explosions rumbled the ship, tossing it’s passengers wildly like ragdolls. The ones lucky enough to have been on the far side of the Spiral Serpent had managed to conceal enough airlocks, shutting out space and explosions. The dead littered the halls, but that was the last thing to worry about. Upon having awakened, the soldiers realized the unarmed crew-members were exposed to the prison and asylum sectors. As the survivors realized their situation, it also became clear the captain and pilots had died in the chaos.​

Mindeye quickly awoke upon the initial noise, which reverberated through even the deepest bowels of the vessel. She stood up, touching the wall both for support and to find out what happened. "A meteorite, huh?" The explosions had bent one of the beams of the doorframe, which was wide enough for her to reach an arm through. She did so, and typed the unlock code into the console. Once she was out of her cell, she headed along the maze-like corridors, one hand against the wall. Despite never having been here before, her air of confidence suggested she knew the route she needed off by heart. Which was somewhat true, since she had the memories of the walls which knew it. Unhindered by things she couldn't tear open with her claws, she made her way to the storage room and equipped herself with her confiscated items (and the confiscated items of several other prisoners), before wandering into the halls again. As she wandered, she found herself by the cell of a certain psycho. What was his name again... Rawbed? Something like that. He was probably the most famous in her block. "Yo, FloorDead. Wanna come help me kill some people? I bet you're at least half as bloodthirsty as I am right now. Oh and along the way we could enslave some people to make an escape ship for us." She looked at him through the cell window for a short time, slightly repulsed by his rather fragile body, before typing in the door's code and releasing the lock.
Reactions: YuriLucien

“Well, we’re in deep shit now…” Despite the heavy damage that the ship had suffered, its self-repair systems were in the midst of repairs to keep the ship from falling apart. A link with the mainframe quickly revealed just how bad the damage was, but Alant steeled himself with a deep breath. Yes, he probably just lost a couple of friends and acquaintances. Now he had to keep those left hadn’t died from the meteorite safe from the criminals and psychos that were on the loose now. Well mostly the psychos since the criminals could be counted on to try and keep themselves alive rather than do whatever they wanted for the shits and giggles.

“This is Europa,” he called out over whatever speakers still worked, “kill-orders are in effect. I repeat, kill-orders have been put in effect. Security protocols are also engaged.” Normally it wouldn’t be his call, but with higher command’s status questionable at the moment, he was making it perfectly clear what the status quo was; he didn’t expect anything from most of the inmates aboard the ship. He trusted his comrades enough that they wouldn’t hesitate to do what was necessary to keep themselves alive, but a friendly reminder never hurt.

He paid attention to the linked feeds in the corner of his helmet as he advanced towards his current objective. While a majority of the security equipment was still functional, the grid or equipment had been knocked out in several locations. The functional areas repelled criminals and psychos easily enough, automated turrets putting down the inmates with machined precision. Of his most immediate concern would be the storage areas where contraband was held. He still didn’t understand why they didn’t just get rid of the dangerous goods and items, but hell it wasn’t him who made the rules.

“Fucking great,” he muttered as his cannon discharged and punched a bloody hole through someone that happened to be climbing out of the wrecked door. He moved the fresh corpse aside and grumbled as he noted that the room had basically been looted, meaning there were a bunch of inmates with dangerous goods in hand.

Alant didn’t need anyone to tell him that his actions were brutal, but the situation was out of hand. Yes, the Spiral Serpent was equipped and capable of dealing with a security breach. That was with the prison ship at an acceptable level of functionality though, not outright crippled and understaffed. As far as he knew, they could not afford to take prisoners or use non-lethal methods.
C

Grim was sound asleep, and he hated to be awoken from his sleep. Grim was a powerful criminal, so he had a very special cell. He had his arms and legs chained to the wall. All of a sudden a meteor struck the ship, and woke Grim from his sleep. Grim was not happy about this, but the meteor did loosen his chains a little. Grim saw his chance to escape, and took it. With all his might, Grim manged to get one arm free. He used the arm that was free to pull the rest of the chains off him, and in a few seconds, Grim was free. All that was in his way now was the cell door. Grim slowly walked towards the cell door, and punched it with all of his might. In one punch the door flew off, and killed two inmates that where trying to escape. Grim slowly walked out of his cell and roar so loud that every one in the ship heard it. Grim then started to head towards the psycho cells. After a few minutes of walking, Grim made it to the psycho cells, but he stopped because he saw that some girl was talking to some guy in a cage. Grim then walked over to them. Once he made it to them, Grim looked at the girl for a few seconds and the looked at the guy. Team. Grim said as he placed his hands on their heads, and then immediately took his hands off then. Grim then picked up the female and place her on his back. It's probably because she looks like a cat to Grim.
@Karakui @YuriLucien
Last edited by a moderator: Sep 6, 2015

"Oh yay, now I don't have to walk! So, volcano-guy's going to be helping us too. That's nice. C'mon, BoarHead. We probably shouldn't dawdle. The soldiers will be heading to the psycho block pretty soon, and it'll be way more fun to slaughter them while they're not prepared."
Show hidden low quality content