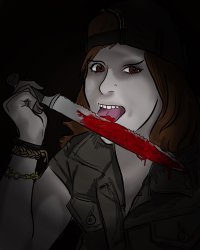 Hello! I saw that this was a thing and I was wondering if any artists (beginners-experts I don't care) would like to create portraits for any of them?

They're all humans. Nothing special.

Angelica: My usual "victim" OC. I use her in multiple roleplays and a LOT of crap has happened to her... You could draw her before or after these things happened.

Or you could make her AFTER stuff happens. I guess I could combine the different rps together. She took a lighter to her left eye and to her right hand, took a hammer to her left hand, and had knives impale her arms and legs all the way through. Her top layer of flesh was cut open so her stomach area is a huge infected scab. She has stitch marks just above the knees from her legs being cut off and sewn back on. Her right cheek has been seared through so you can see her teeth. She has multiple wounds scattered throughout her body from a power drill. She also suffered electric shocks if you can somehow illustrate that.


Victoria: The OC that got me banned from six other rp sites. An innocent woman for the most part, but every now and then she comes home covered in "red paint" and quickly jumps in the shower. She owns her own business in a small town in Ohio and spends a lot of her time managing it, but every few weeks she shuts down, searching for her next victim.

She's relatively skinny. 5'6", long black hair. Amber eyes. She first introduces herself to her victims completely covered in Halloween theatre face paint. She makes it look like some sort of skeleton, with black around the eyes and mouth and a white base. Interesting, really. She could or could not be covered in blood in the drawing. Just know that she never kills people. Never did, never will. No matter how many people beg her to.


I have a third character named Heather and a fourth named Niko (She's a vampire) but I'm not so involved with them as I am with Angelica or Victoria. Just in case anyone's interested.