Original poster
When humans were given a new chance for civilization, they made no hesitation to take it. Chances like these do not come often, nor were they always the brightest moments. Not a single soul that carried even an ounce of faith could resist such an opportunity. It was a world of heavenly skies, an endless scene and considered holy ground. This place was known as the World of Ágios, a place above the clouds where the religious consider where Gods roam. However, the glory of Ágios did not last as, like most human civilizations, became corrupted.

Humans eventually evolved in the world of Ágios to adapt to the living conditions. Strong gales would crumble their buildings, blow them off into the world below and cause many tragic events. While few humans still wander the world, they are now considered the ancestors of the Myura; an evolved species of the humans who have developed transparent wings to keep them from suffering through these strong gales. However, their wings are not strong enough to carry them anywhere and just provide resistance. Shortly after the Myura came to existence, it was strongly thought that they are the only living beings that would occupy such place but they were far wrong. A feline race started occupying 'their' world, and then came the discovery of Baruni. The original race that occupied Ágios, and for their peace they offered various of technology to the occupants of the world.


Winds were calm as the sun was beginning to rise past the cloud line. The distant stars begun to loose their charm as darkness became a blend of light creating unique colors in the sky. The moon faced it's inhabitants closely as it said their farewells. The sun begun to make it's distinct appearance revealing all in shadows.

&quot;What is this, a circus!?&quot;
A large, mechanical ship drifted through the elegant clouds ripping it apart only for it to be formed again shortly after. The engines hummed quietly as the panels rotated slowly. A wooden deck harbored many wandering occupants searching for something to do. The metal panels creaked occasionally making it the only sound to be heard for miles until a small town was close.

A woman in dark robe-like garments busted through a door that led to the deck from the cabins. More than half of her body was concealed leaving only her blue tinted, gray legs and tail revealed. Unique leopard printing of violet and yellow followed throughout her legs but did not carry out through her tail. She was of a feline decent, and made no attempt to hide this. Despite her face being covered, she looked around gazing at those who scattered at her appearance in hopes of finding something to make them look as if they were busy.

"What is this, a circus!? Think you can stumble around doing nothing other than entertaining yourself with a few hand motions?" As she took a few steps to the side and looked yonder, a town could be seen coming into view despite the slow approach. Each moment was another closer to their landing.

"That is Kumpfir Ms. Isela. It's known for dynamic building structures thanks to the technology provided by the Baruni. Our package is located there..." A Myura gentleman dressed in rather distinct, upper class clothing approached behind Isela. His transparent wings remain hidden underneath his clothes. This man was Devoni, a pathfinder and locator for Isela.

Original poster
Kumpfir from a distance alone was magnificent in its own way tall buildings of metal gleamed towards the center of the city far from the waiting ports,However years of wear and tear as well as a less than savory lifestyle in the ports and slums had left the once magnificent city tarnished in a way.The ports at this Distance seemed to house many clustered structures as well as ships waded out onto the winds both leaving and coming to port which consisted of a large dome like building with several openings to take and receive boats as well as to hitch them in without fear of stray winds carrying them off it was one of few ports to carry such a docking building.

It was within the marketplace also located in this larger Domicile that there package did indeed await them.A tall figure covered from head to toe in thick long dark grey fur took her time walking from stall to stall of the many sellers close to the docking areas.HER larger figure slouched as she carried a very large backpack covered with gear a side satchel hanging off her side constantly slapping against one of her stone like legs as she moves through a heavy crowed towards the docking area.She Finally makes her way through joining a crowed of Muryoa pedestrians and easily standing above them.As they wait for the arrival of the incoming boats several people move away from the Kumo Ran most out of fear or confusion even though she was wearing A long captains style jacket suggesting she was part of the militia that protected the port and often were found working for the council. Blue jackets of the navy could be seen on all docks working to help or watch some of the people bringing new goods into the port.

Nasuma shifted under the gazes of those around her becoming more agitated the longer this took as she stared into the docking Areas from the platform she and the others had been designated which was actually a small archway above the shipping areas.IT was Connected to a stairwell as were many others like it across the area meant to let ship runners pass up people on there way into the market area.Nasuma didn't take well to being crowded particularly as several people Shoved up against her and the crowed began to grow as new ships finally docked .

"By the sun and moon get out of my way!"Comes a sudden snarl from the middle of the crowed as the fur covered creature suddenly grabs a man and throws him into another the crowed quickly spreading as a few people scream and others scramble to get away from the supposedly crazy Kumo Ran.The creature finally relaxing as she was given some room and straitening herself up a little in response to the sudden attention being given to her.
S

Original poster
Their glistening ship pulled into the docks, making it's final creaks as it came to a halt. The ship was not first class and probably not close to second, but it looked nice on the outside. Isela had her men paint decorative decal on the sides, and a rather eerie symbol. The symbol itself was difficult to understand for those who would only glance at it quickly. Three pikes aim towards a crescent moon followed by a ghostly version of the crescent moon below it. The details were simple, yet the image itself was striking. 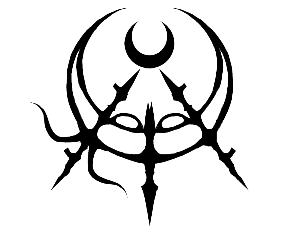 Isela's Well-Known Symbol of Her Power
Upon a loud mechanical noise, as if a wheel was turning, large chains poured out of the sides of the ship. The chains locked into the designated port and a metallic boardwalk shot to the port. There a feline woman walked down, still completely covered from the chest up. Despite this fact, everyone knew at lease what she stood for. This woman was the mastermind behind the trade routes, the thief in the night and the seductive killer. No one dared to overstep their welcoming. Two men shortly followed behind her. Devoni the upperclass Myura and Vorken, the unknown being cloaked in black. Some say he was a race never yet learned, others say he is only a distorted previous race but none know the truth.
Devoni pointed yonder, past the crowd as Isela nodded. "Over there my lady."
With a snarky approach, "Tch, what a crowd. Vorken make a path for us."
There, Vorken lifted up his head and howled into the sky. His howl was as loud as thunder and as frightening as lightning. This caused the crowd to silence their excitement from other ships and slowly begin to part. Vorken made his way ahead of Isela as they followed closely behind. Quickly, they approached a Kumo Ran that stood before them. "Huh, how interesting...."
Show hidden low quality content