Helloooo c:
This will be a searching-like thing.. Obviously..
But anywho, it's nice to meet people! ^3^
Now let's see...

~I'm not a new Role-Player, I promise ^U^ It may take a few posts to get used to the length and Rp, but other than that everything else will be fine.
~I will probably be on everyday, and if not then I'll most likely inform anyone in a RP with me.
~I usually go by she/her, but I don't really have any preferences.
~My old account was... Cromical? I believe. Yup, pretty sure c:
~My general length in posts can differ, it depends on future said partner.

Alrighty so, I honestly prefer M/M relationships- M/F relationships are alright but I've never really been comfortable with them. But I won't mind doing one, as long as I'm used to my partners.. F/F is just there, I don't mind doing it. ~ And I'm usually Dominant, but I don't really mind being Submissive or switch (But I'm a terrible submissive so♥ Just a warning)

Seeing as I haven't done one of these in a while, it's probably really bad aaannnnnddd I apologize. It'll (Hopefully) get better xD But don't have too much hope because it'll probably only get worse♥

Well, since I still have problems with the format and stuff- And am slowly learning, Inbox RP's are more or less preferred. But I will go through whatever just to do whatever my partner wants so it's really her/his/their choice(s) So yeah ^u^

I can probably post a few times a day, depending on what's going on. For example, with Finals/Mid-terms next week it may only be one post a day. But if it were anything else- Like just a weekday and all my homework's done and there's nothing else to do, I can post up to maybe five posts. But I'm not promising anything o_o So don't get angry if I just.. You know, disappear for like two days or something xD

Anyways, here are some things I really won't do or prefer to not happen. One-Liners are okay, but I usually don't like them because I mean.. You can't show your character's feelings with just ONE sentence c: That's just kind of boring isn't it~ So maybe at least four to five sentences to a paragraph or more is appreciated.

On to the smut! c:
I prefer more plot than smut, or maybe a balance of the two. I can't just do a Rp that's solely based on sex. It would just get boring really quickly and we don't want that.

I've never been a fan of rape, or abuse, but if I'm comfortable (with my Parter/whoever that is), then I don't exactly mind. It really just depends, and if someone wants to do it, then okay. I will not do Watersports, furry (Depending.. Maybe..), scat, and excessive gore. But other than that, we're cool and I'll probably try anything else.

If I rush the sex scenes a little bit, I'm sorry, just tell me and I'll fix that. Usually I can make the scenes nice and lengthy- But when you're someone like me and sometimes get embarrassed with things.. Yeah xD. Uh.. Never control my characters.. Ever. I'll come after whoever does that and bite their ass *^* Rawr.

PM me! Message me on here! MY profile.. I don't know, just somewhere to tell me you're interested. xD

Now to the plots or.. More like Pairings or whatever.. I guess~

And so that really all I can think of at the moment. I don't really have any plots at the moment- Or completely thought out plots at least. But I will give whoever reads this just whatever I had in mind at the moment.

Plot one!
Everyone is born with a number on their wrist, in small, black, almost cursive-like letters. The letters show them whom their soul mate would be, or the person they're supposed to be with for a very long time (If not forever). Everyone searches for that special person all their lives, and only sometimes will someone die without ever finding the one they're supposed to call 'Theirs' It's also a very rare case for people to get paired up with the same gender. Those people were special, treated differently- So be it bad or good. {C1} hasn't found his/her partner yet, and is simply waiting to see what fate brings. {C2} is like a ticking time bomb, trying his/hers absolute hardest to find their soulmate so they wouldn't be alone anymore.

(It wasn't that great and I apologize. We can switch and change it up however you like it.)

But for now that's really all I have in mind. So.. PM me or something! Tell me you're interested ^U^ Thank you for reading!! I really appreciate it. Whoop whoop♥
​ 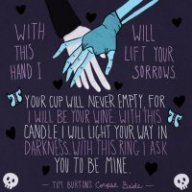 Awesome! xD PM me so we can discuss ~
T

I would love to do a Roleplay with you.
I have been craving for a Dominant set Roleplay- with a lot of detail. You sound perfect, my friend. -w-

The pairing I like the sounds off:
I do hope you will be able to roleplay with me, as I would love to(as I've already said, sorrryy~) I look forward from hearing from you!^-^

xanaxandcoffee said:
I would love to do a Roleplay with you.
I have been craving for a Dominant set Roleplay- with a lot of detail. You sound perfect, my friend. -w-

The pairing I like the sounds off:
I do hope you will be able to roleplay with me, as I would love to(as I've already said, sorrryy~) I look forward from hearing from you!^-^
Click to expand...

Hello! :D I'm glad that you're interested. Just send me up a PM and we can discuss. ;3

To whoever decides to read this: I will not take anymore partners after Miss Coffee until further notice.

A person can only take so many, you know? ^u^
Reactions: 1 person 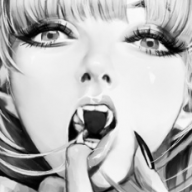 When you're ready to take partners again, I'd be interested in discussing a roleplay with you.
I'm interested in all of these plots.
Show hidden low quality content