Original poster
Greetings folks,​
​
It is a pleasure to meet you all on the inter-webs, my name is BlueSquid but you can simply call me Squid for short. I've been roleplaying for a few years with numerous breaks along the road. I am currently working full time and managing to find some free time to write in the evenings (EDT). It has been an enjoyable experience so far on Iwaku, however, my partners fluctuate quite often and this is the reason why I am in search of new roleplayers. If you would like to give my Dice Roleplay a shot, don't hesitate to contact me! If interested in regular roleplay, I can do that as well. Below, you will find more information about my preferences, feel free to take a look, thank you!

Delver's Delight​
The PCs are treasure-hunters, who have caught wind of a treasure-laden ruin. They go to explore it, and must deal with its supernatural denizens to win the treasure and get out alive. Common Twists & Themes: The treasure itself is something dangerous. The treasure isn't in a ruin, but in a wilderness or even hidden somewhere "civilized." The treasure is someone else's rightful property. The treasure turns out to have a will of its own.​
Look, Don't Touch​
The PCs are working surveillance - spying on a person, gathering information on a beast in the wild, scouting a new sector. Regardless of the scale, the primary conflict (at least at the start) is the rule that they are only to watch, listen and learn. They are not to make contact or let themselves be known. Common Twists & Themes: The target gets itself in trouble and the PCs must decide whether to break the no-contact rule in order to mount a rescue.​
​
[fieldbox="Squid's Dice Roleplaying, hotpink, dashed, 10, Andale Mono"]

Step 1 | The basic Outcomes, how it works

Threats and Hostile Challenges
It threatens bruises and scrapes at worst: d4 damage
It’s likely to spill some blood, but nothing horrendous: d6 damage
It might break some bones: d8 damage
It could kill a common person: d10 damage

Step 2 | Set up your Attributes
Roll in the DiceBox by typing /roll 3d6​
Roll 3 six sided die, 6 times, move the results around and add them to each Attributes as you wish to portray your character. The abilities are Strength, Constitution, Dexterity, Intelligence, Wisdom, and Charisma. They measure a player character’s raw ability in each of those areas on a scale from 3 to 18, where 18 is the peak of mortal ability.
​
Strength: 9
Dexterity: 8
Constitution: 12
Intelligence: 16
Wisdom: 15
Charisma: 13

Step 3 | Determine your Attribute's Modifiers
Each ability has a modifier associated with it that is used when rolling with that ability. These are written as three-letter abbreviations: STR, CON, DEX, INT, WIS, CHA. Modifiers range from (-3) to (+3). The modifier is always derived from the current ability score.
​
Step 4 | Determine your Health​
A character’s health is a measure of their stamina and endurance. More Health means the character can fight longer and endure more trauma before facing Death’s cold stare.

Step 5 | Determine your Load
Your Load illustrates abstractly how much your character can carry.
To give you an idea, here are a couple of examples: Parchment scroll (0 load), Bandages (0 load), Climbing set (2 load), Claymore (3 load), Plate armor (4 load), Keg of Dwarven Stout (4 load), Bag of bread (1 load)

Physical Description: Short but stout! Around half the size of a Man, precisely, three feet tall and 2 inches. Right hand is missing the pinky finger. Scruffy beard with a few white strands. Straight posture, snub-nosed with brown and glassy eyes if he has recently smoked pipe leaf. A little bit of an ale belly, but he doesn't look pregnant. Carries usually a distinct smell of firewood, since he travels and camps regularly. Wears a used but warm leather vest made of wild boar fur with a peach-white linen shirt under it. Has brown pants with a tint of yellow hue, might be dirt. He generally doesn't pay attention on how dirty his hands get and when he wipes his sweat off his face, it generally results in him being covered with dirt marks.

Background History: Born and raised by his aunt and uncle, Bophîn had a decent childhood where he learned about the serene life of his people. He learned to work the soil, brew ale and smoke pipe leaf. His uncle always told him, from a young age, that the outside world is and will remain dangerous for all halflings. The best and most secure way to live a fulfilling life is to prevail in the fertile lands of Bloomfield. Unfortunately for his uncle, Bophîn was unique and quite hungry. This sedentary life wasn't enough to fulfill his dreams and he wanted to explore the whole world. Maybe even learn about the disappearance of his parents that, till this day, he had no news from. During his travels, Bophîn had to learn the hard way, his uncle was right, the life of an halfing amongst Men wasn't the most ideal. The world of men is quite different and it seems like everything has value, and each thing is defined with those shiny tokens, made out of gold ore. At first, Bophîn couldn't understand why nobody was sharing, but he learned quickly the ways of Men. 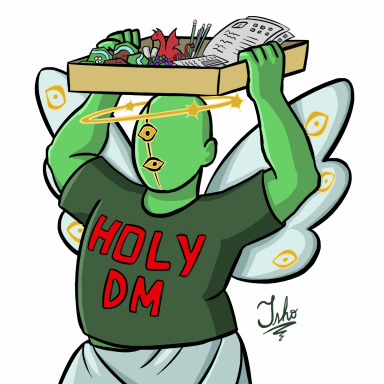 I'm interested, but i need a plot, a story and something a little more juicy than the system alone
N