For a little while now in the land of Ibipoff people have been kidnapped, but more than usual. For one, the kidnappings aren't just in Ibipoff. People are being kidnapped from their respective worlds and taken to a mysterious place in Ibipof, this mysterious place is only known to the kidnapper/s. If Ibipoff people try to locate this mysterious place, they will not find it. Because there is a magic barrier over this place that returns the person to another part of the area.
The kidnapper/s goal is unkown, however it's rumored that the kidnapped are being used as a source of energy.
More and more people are being kidnapped every day, and if no one stops them. Then eventually the world will have no population!

The land of Ibipoff is mostly a magical and grassy land, although there are other terrains. But most of the world is full of plains and forests, there is only one volcano in the world as well as a very small area covered in ice.
The one Volcano is surrounded by a desert, it is called Irigia. It mainly houses dwarves and ogres, the workers there use the volcano to make steel objects.
The icy terrain is called Shiv and contains mostly elves and ice fairies, they mine icebergs to make ice cubes for people's beverages.

Weapons
Here's how it goes, each character has a main long range weapon (Like a gun or bow and arrow) and a main close range weapon (like a sword or spear) However the character can also use other weapons, as long as it makes sense and they can use it properly. For example a nativ tribes character can't go "screw my bow & arrow! Imma gonna use a gun!" cause the character wouldn't know how to use a gun and probably shoot an innocent bunny by accident. However if it were a character that is a master of long range weapons then it would be acceptable, it just has to fit the character. If the character is based upon yourself then it would be any weapon you think is cool.
Also weapons are mostly created by the person, not many types of weapons are sold in stores. But by combining a weapon with another weapon or an item and using some magic it can create something new!


Chackram, Throwing Knives, Fans (japanese fans), pick axe, Nail gun (It shoots out fake finger nails! It's my very own invention), Book, Anchor, Ball, Doll, Trumpet, Wrench, Disk, Boomerang Chackram, Graveryl (See velvet from Odin Sphere), Dice, Shot (like a small metal square that you throw, see chrono cross), Sling (an ancient weapon used to fling rocks), Kadenma, Cards, Scizzors, Balloon (of course must be magical!), Yo-Yo, Wieght (sure don't want to get whacked in the head by that!), Egg (see Anastasia from Shadow Hearts 2), Spoon, Spork, Swallow (see chrono cross's Serge or Suikoden Tactics Kyril), Leg Contraption(weird thing I saw on an anime girl once, she had this thing hooked on her leg and it had sharp sword things pointing out o_O), Throwing Hammer & or Axe, Pots & pans, Grapple, Gear (to throw!), Anvil, Katar, Bag ( an ordinary bag), Poison powder, Javelin, Blowgun, Phone- that shoots electricity out (my own invention), Broom, Cannon, Sai, Trump~ Fire lance, Fireworks, Fire loop (kind of like a ring of fire), A giant wood block (see Joachim from Shadow Hearts), Tonfa, Spike ball, Net, Card shooter, Black Eggs, Fly Swatter, flashlight that shoots out a laser, Flower, Jarts, Gem Blaster (it shoots out jewels!), Bits Sword( a magical sword that breaks into tiny pieces and the pieces shoot out at an enemy), Taser, Amei Piercers, Banana Peel, Umbrella/Parasol, Rake, Rubber Band, Slinky, Karingi (shooter of everything, it can shoot anything you want it to! From daggers to chairs!).
Magic
Magic is unlimited, you can do anything with magic! You can levitate chairs or shoot fire out of your hands! Or you may like to teleport or fly even!
Magic is known as Kitra in Ibipoff & another world called Tosofom, some Kitra come naturally by itself. But the rest you have to buy at a magic store.
There are types of Kitra
Kitra= Magical spells you can learn and buy at a magic store.
Kir= Are automatic and come naturally.
Kere= Is like Kir but no one can learn the same kere, everyone else will learn their own Kere.
Kirkergaurd=Are special weapon attacks learned after using a weapon for a certain amount of time.
Kirta= Rare Kitra, there are very few of the same kind of spell.
Also everyone that learns magic will automatically have the spell called "Magic Glitter" which is a spell that shoots out magical glitter, it's an attack and it attacks one enemy. There are more variations of this spell, but this one comes first. So everyone will have this spell!

You can also use magic from any other game too, from runes to mana eggs! But they have to come from another world!

Yin & Yang affinity is Light or Dark, so basically is your character better with holy magic or darkness magic?

Weapon affinity just means is your character a magican, a fighter or in between? There is Attack ( fighter type), Magic (magician type) and Attagic ( a fighter and magician type of character)

Celestial Affinity is an alignment with the stars, there is the Sun affinity, Star Affinity (is in between) and Moon affinity. These affinities are unkown on what they do (cause in reality I never figured out what they would be for XD)

Magic Usage
Magical Kitra, the person may only hold 10 magic Kitra. You can replace a Kitra with another however.
Kirkergaurd- A character can hold up to three attack moves per weapon.
Kir and Kere- Are unlimited since they come naturally. But you can't naturally get one every 10 minutes, they come sparingly.

Class
There are no classes, but if you'd like. Your character can have a class, there are however attack types. you can choose weather the character is more of an attacker, magician or in between.

Characters
You can make as many characters as you want, just make sure you can handle all of them!

Once I make the topic, you can start right away. You can have it that your character lives in ____ Village/castle/town ECT and you can post your adventure. We can all start in different areas of the world.
H

Name: Kai
Age: 20
Gender: Male
Main Close Range Weapon: Bo-Staff
Main Long Range Weapon: Boomerang
Alignment: Good
Elemental Affinity: Fire & Wind
Yin & Yang Affinity: Light
Weapon Affinity: Attagic
Celestial Affinity: Star
Bio: A young hero who was given magical powers by a girl named Lucinda, along with 40+ of his friends saved two worlds from collapse: Tosofom and Earth. But now he's back to rescue a friend of his along with Arxetrex.
The main character Kai (who is based off of me) is fighting a monster in a gloomy dungeon, he has no idea what he is doing there but he continues to fight a monster. But then after more enemies appear, more allies appear Eventually one ally appears known as Hyeungi, after he saves the characters from a monster. Another odd monster comes and kidnaps him

My character Kai and another character Arxetrex run after the prison cage and try to shoot it to slow it down, but this prison cage was very fast and the two lost him. So from there, The two go on an adventure to find him!
Since they were in a dungeon, they don't know where they are; so they eventually find a way out and find out they are in a strange world they haven't heard of called Ibipoff. But they start finding out that many people are actually being kidnapped! So as Kai and Arxetrex go on they're adventure, they meet other people who want to get their kidnapped friends or family members back too. Soon Kai, Arxetrex and others will find out that this kidnapping is for a big reason and a really bad one at that. The people/person who is doing it is unknown, but whoever it is wants to use the humans as a power source for something, which is also unkown.

Name: Et
Age: Unkown but younger than 18
Gender: Female
Main Close Range Weapon: Dual Swords
Main Long Range Weapon: Bow & Arrow
Alignment: Good (but Psychotic)
Elemental Affinity: Water and Fire
Yin & Yang Affinity: Dark
Weapon Affinity: Attack
Celestial Affinity:Sun
Bio: Some may call her a sociopath, but to Kai she is a friend (no matter how crazy she is) She goes off with Kai to find their friend Hyeungi who was taken away by a strange monster. 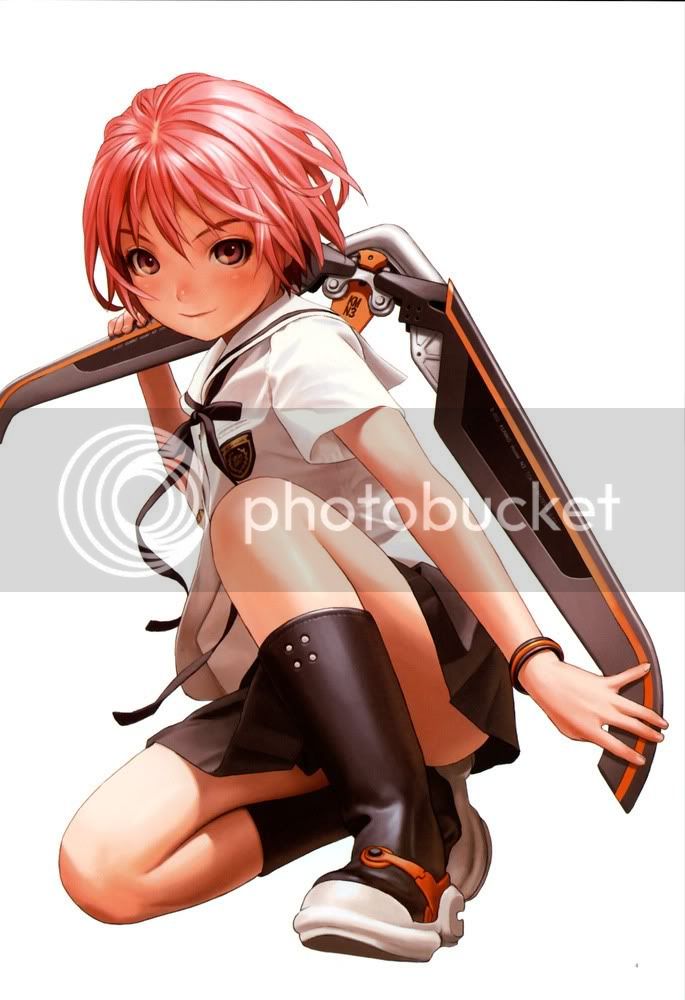 Original poster
I'll join. If you'll have me.