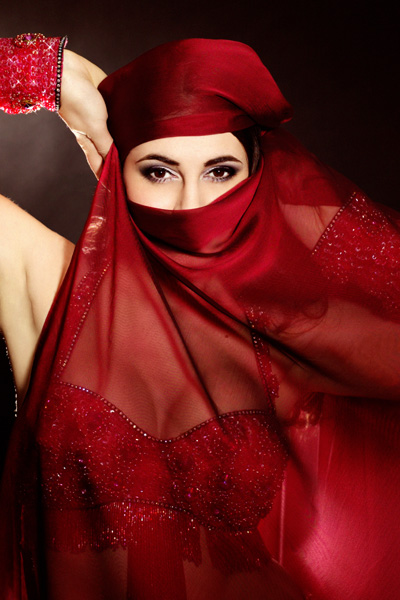 Original poster
Shaleema, just shy of sixteen with smooth olive skin, eyes like the night sky and blessed with the looks of a goddess, ebony hair tumbling down her back brushing past her hips, clad in vibrant red that broke perfectly with her own colours, stared out from the large balcony of her chambers, shared with the other mistresse's. In her land she'd been a princess, destined to become queen, in her land where women held power as men did, people had bowed to her and taken her orders, yet she'd been the most innocent in her family, her large black eyes curious and care free.

Then war struck, it raged for weeks upon weeks, her land fought bravely and was near victory until a fatal betrayal turned the tides causing Shaleema's people to lose the battle. People were killed on spot, bodies littring the streets of the capital as the enemy army drew close to the royal palace, as the doors were demolished and troops stormed inside chaos filled the beutiful palace, but no one could escape the slaughter, except Shaleema. As the oldest and most beautiful princess she was taken to enemy land, her new role was as mistress in the Sultan's harem. More than once had she cursed her fate, wishing to have been murdered along with her family, still their screams haunted her dreams, whenever she closed her eyes the red stained scene played out before her, all she held dear cut down before her eyes and nothing had she done to help them.

The red top fitted with glittering stones was barely enough to cover her properly, her floor length red skirt was slitted on both sides up to the curved belt that secured it to her hips and the only other thing she was allowed to wear and cover herself was a large shawl, woven so thin it you could see through it that she used when dancing for her new master. In her own home she wouldn't have minded terribly over her clothes but here, as she wore the clothes for seduction she was ashamed and furious, the degradation she felt gave her dark eyes a smoldering look that just made her more popular.

Was this to be her life from now on? To serve as a mistress to a sultan who already had an entire harem of power hungry women that fought with all their might to gain the place as the next queen. Or was it to perhaps to follow the words her goddess whispered to her ear at night, to avenge her family, Shaleema believed that it was and if she had to die for it to happen then who were she to complain. Gaining the spot as the Sultan's favourite and maybe even his queen form there it would be easy to end his life one night, of course she'd never get away with it but her death would be free from guilt and pain, her conscience would be clear as she met her family beyond this life, they would be proud that she avenged their death's and the fall of their large empire.

A dark smile spread over the young woman's face, what was left of her innocence fell away that night, a burning passion and a sly mind took its place as Shaleema turned around and went inside, the cool breeze caressed her skinas if in agreement and for a moment she thought she could her her goddess whisper aproval of the woman's plan. Shaleema's plan to become the Sultan's last mistress in this life.
K

Original poster
The girl's name is Faiza and it's the 21st century. She's a lower rung catalogue model doing her 4th take in clothes designed by a quasi-famous up and coming fashion designer. An embarrassing pimple around her mouth has been irking her and the photographer the entire shoot and in a fit of inspiration from the fan constantly blowing the shawl into her face she maneuvers it to cover the unsightly zit. That photograph, turning out to be the best out of all the photos is sent to print in an equally lower rung women's magazine.

The photograph explodes across fashion magazines worldwide. The commentary on the photograph and the subject sprout hundreds and thousands of discussions. Through it all, Faiza remains collected and down-to-earth in her sudden rocketing rise to international fame. One day, she receives an unmarked letter requesting an audience in a nondescript, local restaurant. The constant glitz and glamour that is now present in her life makes the invitation irresistible if only to relive what it was like to be unnoticed.

When Faiza meets her mystery guest, secrets too outlandish to believe outright are revealed to her. Humans are most definitely NOT alone in the universe. An agency specializing in recruiting certain people have zeroed in on Faiza due to her level-headed composure in the face of notoriety, something that is a treasured virtue of all who are recruited into the agency. They give Faiza a choice:

Take a concoction and forget all that was told to her or,

become the ultimate spokesmodel. A spokesmodel for Earth in an Interuniversal Senate wherein the very existence of Earth and the galaxy it resides in is being put to a vote.