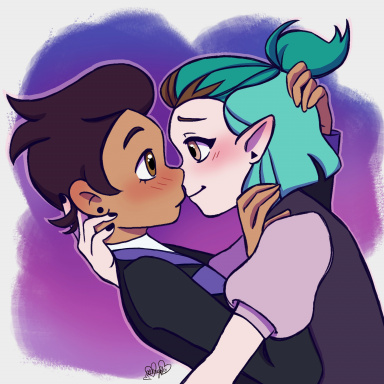 Online Availability
I'm online pretty much most of the day, unless I'm working, then I'll be off from about 10am to 3:30, or from about 5pm to 11pm (UK time)

A girl is discovered in an old Roman temple, miraculously alive after the recent earthquake, and she consequently falls head over heels for the young archaeologist who found her. However, she had a secret - the reason that she was still alive, is because she is a living, breathing incarnation of Vesta's Flame (Roman goddess of the hearth) and if she touches someone, she can either freeze them to death, or burn them to death instantly.

"Wh-what's going on! Someone! Anyone! Help me!" the young boy of about seventeen was in a panic. His eyes wide in utter terror as the azure flames covered his body. He knew he was on fire but for some reason it felt.... cold. As he flailed his arms about in an attempt to quell the cold flames that now consumed his body. As he went to release a second scream of terror his voice became caught in his own throat. He could feel the icicle like fire coursing throughout his body now, slowly enveloping every organ and muscle throughout his body. It was only several more minutes before the young boy lay dead on the ground, nothing but a charred corpse with only wisps of the cold flames left on his body. All was quiet for about an hour until a hoarse cough echoed out from the corpse. The fingers began to move and the burnt flesh began to crumple and fall away, the boy arose confused and with the same azure flames now completely filling his eyes, he clenched his hands and looked at his now naked body in confusion.
T

Original poster
The girl with the fire red hair woke up in a strange place. She's seen this place, but only in her dreams. The room she was in was small, a bed room, the bed was king sized, the comferter red with gold lineing and a large gold K in the middle. The curtans were open in the window, the sun pooring in, and making the room glow yellow. She shifted to sit up, but then felt a horrible pain in her side, forcing her to contract backwards and call out in pain. She started painting from the pain, eyes closed tightly, but then felt a warm hand on her shoulder. Her ice blue eyes shot open and she flinched painfully away from the hand, fear lining her eyes.

"I'm sorry to scare you," the man that had touched her appologized, his odd amber eyes and snow white hair reminding the girl of her father, but this man wasn't her father. "I am Xavier, and you are Kensley, I know this because you use to come to us all the time princess," he stepped away from the bed and bowed to her, lifting his eyes to meet hers slowly.

Kensley shook her head, "This isn't real, I'll wake up any second now," she insisted, turning to the opposite side of the bed and getting up. Her side still burned with intence pain, but she ignored it as best as she could by holding it tightly with her left hand. She then looked to Xavier and asked, "This is a dream.... right?" unsure of anything anymore, everythings been so hecktic lately in her life, dreaming was so real now...

Xavier shrugged, walking across the room and turning back to her at the door, "You tell me princess, try it," he nodded, leaving her alone in the small room.

She closed her eyes and shook her head, "This isn't happening," but she still had to try what he said. He meant try using her blue cold flame power she's dreamed about. If she could, then this would have to be real.. It can't be. Taking a deep breath, Kensley opened her eyes, facing a mirror to look into the frost orbs and then she flicked her fire red hair from her face and growled,"Cold Flame!" as if she were attacking an enemy. She thrust her hands forward and from her palms came a blue flame, cold as ice and hot as fire at the same time. She winced from the force it took, and the energy that was drained from her with this motion, and then she stopped it by lowering her hands.

Disbeliefe was the only emotion on her face, she looked at herself in the mirror and spoke, "This is real... I am in my dream, this is real!" excitement took over her face, then she looked down at her hands and whispered, "I'm the future queen of the Kingdom of Elements!" her voice growing louder with every word. She jumped in the air, extending her right hand up quickly, but then fell to the ground in a pile of pain, side throbbing and forcing her to hug herself tightly, pain taking over her body.

This is real, she had finally escaped her real life for one way more exciting! She couldn't believe this, but yet it was happening before her eyes. She got up and looked out the window, then a frost blue dragon, long with scales, no wings, and small ears, large face, and lengthy limbs appeared at the window. Without moving its mouth it spoke to her through her mind, "Welcome home at last my Princess," and she smiled, a tear of joy falling from her eyes. She let out a laugh and took it all in, this was going to be amazing... Or was it?
E

What: The souls of people are known as flames. These 'flames' come in all colours, sizes and shapes. They are always surrounding us, but you can only see them if your in the spirit layer of this world. These flames allow people to do magic- the type of magic is determined by the type of flame. Recently somebody has been stealing peoples flames, turning people in to zombie like monsters. This person is known as cold flame, as he extinguishes peoples flames- why, is still unknown.
Who: Cold flame- a man who is stealing peoples flames; C.O.A.L.- an organization that supports Cold flame; Burning Desire- A small group of skilled magicians, set on bringing Cold Flame and C.O.A.L. to justice; Weiss- spiritual beings that often become human companions, who can transport the between the worlds layers.
When: Modern period.
Where: The planet this is set on is called Arklativa. It is similar to earth, except they use magic instead of technology. The world has three 'layers' to it. the layers all overlap, but you can't see what's happening in the other layers- even if it effects you. Layer one is the physical layer, where most beings live and most objects are. Layer two is the spiritual layer, which is more bare and misty than the physical layer, plus it has stronger magical waves here. The third layer is the matter layer, a dark place where only raw magic energy is- not much is known about this layer