Challenge Phrase
Asleep for 200 Years ​
A

Once upon a time, during the Schism Wars, the Barrin Mandate sent out a fleet of starships three hundred strong, led by the flagship Vermillion to conquer their nearest neighbor, the Karim Imperial Congress. That fleet never made it to its destination, instead lost in Hyperspace. Now, on the two hundredth anniversary of the fleet's disappearance, a small scout ship - one of the Vermillion's launches - drops out of Hyperspace near the Karim capital world. The ship's five occupants - only survivors of the Vermillion fleet - awake from an extended cryosleep to find that the galaxy is quite a different place indeed than it was when they left...

In the year 2000 half the humanity had died of a mystical virus. The rest of the humanity were slowly being tortured to death by the virus. The government decided that the few people that hadn't gotten the virus yet would be frozen and wouldn't wake up before twohundred years in to the future. The rest of humanity would be dead by then because of the virus and the virus would have died out because it wouldn't have humans to live on.

But once they woke up twohundred years later they noticed that one of them had gotten the virus before they got frozen, now they couldn't know who of them that had been infected and they must fight to survive. Who will survive the virus and who will suffer in the infection before dying a painful death?

A faint beeping noise sounded from around the corner, and a dim light flickered, illuminating the dark halls of the abandoned space cruiser. Thyall and Ragnark exchanged glances, their three-fingered hands clutching their bags tightly. This ship...it was undeniably human. The clumsy metal framework of the ship and lack of a warp gate told the two scavengers that much. But nothing had power on this ship anymore...so why was there a light?

They had found it lost in the jungles of their home planet, far away from any populated area. The red spiked vines of their trees had hidden it, swallowing it and keeping it from them for who knew how long.

They took a deep breath and rounded the corner. The only lit up room on the ship, likely on its own power source. The crash hadn't affected it. The room was lined with tanks. And in those tanks lay the humans of the ship, peacefully at rest.

Thyall approached the center console, his bare feet pattering on the floor. "Look." His chittering voice drew Ragnark's attention to him, and she approached hesitantly. "2056," the male read, pointing to the engraving on the side of the table. "Two hundred Earth cycles."

The female shivered. Two hundred cycles? Had these humans been asleep for that long? "What should we do?" She whispered as if saying anything in a louder voice would shatter the glass that kept them contained. Her feelers lay flat on her head, and her monkey-like tail was wrapped around her legs in fear.

"We kill them." Determination resided in her companion's expression.

A nod was her answer and she eyed the tanks with two pairs of large glimmering eyes. "Better a dead human than a live one."

It was their motto- a motto that held true. They didn't need twenty more of these creatures enslaving their kind.
Reactions: Diana

I often envied the stories, the legends of maidens who spent year after slow, long year lost in a dreamless immortal sleep, awaiting the rescue of their one true love for two hundred years or more. For me, I often imagined that the only true love for a depraved soul as tarnished as mine would be the incarnation of death himself. Yet even that, it seemed, was far too fanciful a wish to ever become reality.
Reactions: Diana 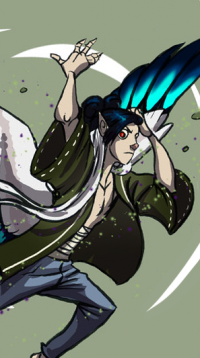 No matter how you looked at it, it was a black, glossy stone that had been pried from the earth and mounted into a tarnished silver crown. It absorbed light in an eerie way, no reflection visible, zero transparency, completely and utterly black. When it had first been discovered in a dig site nearly two hundred years ago the crew had been amazed by its properties and quickly removed it from its rightful place beside the burial grounds of its previous owner. If possible it seemed to darken even further, as though upset about its removal. It sat in various different cases for various different displays through many museums; a wooden crate, a varnished jewelry box, a glass topped case, and finally a crystal clear bell jar behind velvet ropes.

It was time to catalog the museum and distribute everything there to other collections. It was time to be rehomed again and sit in front of thousands of curious eyes while this tarnished crown with it's unnerving gem watched from behind yet another pane of glass. And yet... Something felt different this time when it was carefully handled with cloth gloved fingers. Color faintly pooled into the black gem the longer it was examined by this being. It warmed and glowed hues of magenta and red, then oranges and gold. After two hundred years of cold emptiness, it had found something to wake it- someone, to wake it.
Reactions: Diana

After a couple hundred years, people begin to forget the truth behind the legend. Embellishments layered with harsh reality result in a mess of tales that can only be properly described as "myth." At least, that's what any proper citizen would say.

We are not proper citizens.

For 200 years, a great power has slept beneath our very noses. Waiting, lurking...and now it's awakening. Magic is finally returning. Only a special few will be able to feel its energy as it returns to our world. Fewer still will even be able to use it. Magical blood has become mixed, marred with the imperfection of mortals. But no matter. We have found a way to rectify this situation.

We have found a way to purify this world.
Reactions: Diana

Excitement filled her as she boarded the space ship bound for a world far away. Agreeing to be part of a recolonization crew hadn't been a difficult decision for her, since she had no family and no real life to leave behind. She laid in the stasis pod and allowed the deep sleep to engulf her.

Two hundred years later the pods opened and gently those contained within emerged from their long slumber, only to find that they were not on some far distant planet but were still on earth. A message flickered to life on the screen at the front of the ship, "Forgive us for lying to you all. You were our last hope of saving humanity from a disease that was ravaging the world. By the time your pods open, we are hopeful that this disease will have died with everyone else. The earth is yours to fill and rebuild. Good luck."
Reactions: Diana
A

The slow hiss of releasing gases intrudes on your sleep. A ragged breath tears your lungs, unused for two centuries.
"Welcome traveller. Do not be afraid. Rejuvenation sequences have been activated" the AI's metallic voice pierces your skull.
Your pod fills with rehydration fluid; warm and buoyant. You instinctively attempt to open your eyes, and find you can't, but you knew to expect this. You probably look like beef jerky right now.
The AI is reduced to a murmur as you float, liquid filling your ears, listing distances, dates, and ship status. Apparently everyone arrived in one piece, and almost on schedule. Better than expected.
It relays initial planetary scan results as your pod drains and you tentatively flex tender muscles; magnetosphere, weather patterns, atmospheric data, ph levels, life forms -
Wait.
"Stop," you manage to rasp. "Repeat that about organisms."
"....density of prokaryotic microorganisms native to acidic hot springs..."
Acidic what now?
"Do scans show water?!" your voice raises involuntarily.
"Captain, I am detecting a spike in your blood pressure," comes the unhelpful response.
"Fuck my blood pressure," you shout, barely aware of the other command pods opening around you "initialise Gamma Rejuvenation; I need my CSO awake now."
Last edited by a moderator: Jan 4, 2018
Reactions: Diana

The vampire stumbled from the boarded-up house with trepidation, looking about him with confusion. Carriages of a strange make trundled past the gate, while men and women in clothing he didn't recognize walked down footpaths made of a strange, smooth stone, almost as if someone had poured the streets. The women wore pants, their hair left out and long, while their faces were done in bright colors and dark lines drawn on in kohl, while the men seemed hyper-groomed, though their clothing was looser than before. The vampire looked down upon his own garb, finding he was wearing a doublet, cravat, starched shirt, pantaloons, and boots.

He raced back into the old house before he could be spotted, dashing up the stairs. In a plush room left to disrepair, he tore through a bookcase, flinging books every which way, before finally finding what he was looking for - a chronometer. Too many times he had found himself transported to strange and unfamiliar lands, due to pranks from his rivals. He racked his brains for the last time he'd read the chronometer, and he dimly recalled it set to the date 1818.