NOTE: They say that a picture can tell a thousand words; this challenge aims to see how many words our members can tell from a picture. Each week an image relating to a certain genre shall be posted, and members are challenged to see what sort of plot, character or idea can be developed from it.

CATEGORY: This week, the category is RETRO SCI-FI.
And so without further interruptions... 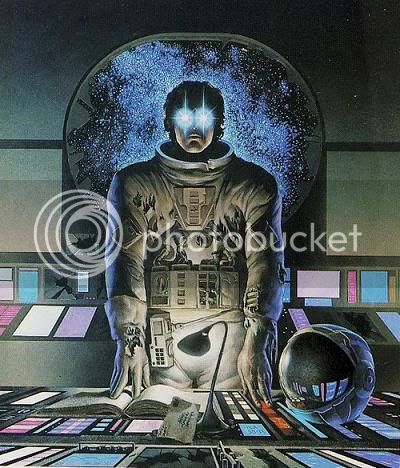 Next week's category will be ANGELIC.
L

Ten people (two pilots, two medics, four scientists, one commander and one VERY lucky prize winner) go up into space in a highly modified spacecraft, made to sustain life for years. They are in search of the distant earth-like planet Frillik Percei 4 to make sure it is stable for human life. On the way there, one scientist conducts an experiment on the reaction of a certain space-stone he managed to retrieve. Little does he know, this rock is very different. He attempts to cut a piece off to easier examine it, but it breaks open and a thick black smog pours out of it and fills the shocked scientist's nose. Over the next few days, he begins acting oddly. Not eating, going off alone for various tasks, and acting as if he didn't know any of his colleagues. A week later, the ship's alarms start blaring warnings and the crew realizes the danger is inside the ship. Something or someone is shorting out the power. The lights go off and suddenly the crew hears something shatter. The commander realizes, all to late, that it was the bay window. Oxygen stabilization plummets, sucking the entire crew out of the ship and into the relentless vaccuums of space. Only one survives. Metallic thudding is heard in the distance, approaching the control room door then suddenly it flies from its hinges, revealing the posessed scientist, clad in a self-stabilized space-suit, face hidden by the tint of the helmet. He aproaches the control panel and begins re-wiring the power, restarting the ship. With the angle you can see him, you see the shattered window behind him, then you see him remove the space-helmet. As the camera dims, you see his eyes, glowing like two white-hot embers as he seems to stare directly into your soul. You can only imagine what he'll do next.
End scene.
Show hidden low quality content
You must log in or register to reply here.
Share:
Reddit Pinterest Tumblr WhatsApp Email Share Link
Top Bottom