CATEGORY: This week, the category is ORIENTAL FANTASY. 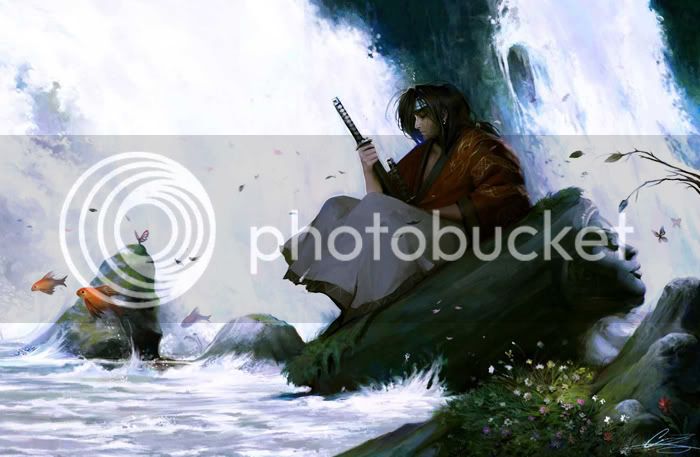 Next week's category will be CYBERPUNK.
B

I kind of got monastery vibes from this picture, with the statuesque woman in the rocks. The man's face looks as though he's about to cry, or is perhaps praying, leading me to get the impression that he's faced some sort of tragedy. I felt like he was some sort of... not excorcist, but maybe shaman or something of the sorts. Like the spirits of the monks haunted the monastery, and he was tasked with freeing them. Even though the land looked piteresque, I thought that it was darker than it appeared to the naked eye, and perhaps was plagued with some sort of curse.

The land was colder than it rightfully should be in the spring, but Niu's fury kept him warm better than any summer sun ever could. He sat, tired and weary from the harsh realities around him, but too determined to give up now. He traveled with his eldest sister Meiling to the ruins of the old monastery which had once stood proud mere footsteps from the base of a mighty waterfall, in order to try and vanquish the restless spirits that had yet to move on into the next world. Now he sat alone, no longer able to truly win, but too angry to accept defeat. It had taken her, first her mind and then her very soul. Niu stood guard over Meiling's body for days, unable to accept the loss, but eventually he gained enough of himself back in which to bury her. He could not give her a proper funeral, but he had no way in which to bring her home. He could merely offer her soul a few prayers before burying her in the soft dirt lining the river.

He had trouble understanding how a land so beautiful could bear a curse as strong as the one that had took Meiling. He wrestled with the thought of abandoning his quest now and returning back to his village, but he knew he had to stay and finish the job. He knew that if he stayed, he may fall victim to the curse as well, but there was too much at stake now to consider the risks. It was no longer just the spirits of some nameless monks who haunted the ruins, but now the spirit of his sister as well. He stood up and gathered his wits before he ventured back into the ruins. He had a lot of work to do.
S

He could feel it, the breath of the land, the heartbeat of the stone. He sat silently, watching as the river rippled and fist swam. What would become of this peaceful place in the hours to come? Would its flowers be trampled by the stampede of war horses? Would its clear, cold water be died red with the blood shed from warriors who do not truly know what the fight for? Would its stones be carved into grave markers for those who will no doubt fall because of some petty argument. He did not wish for that, places such as these where sacred, untouched by the world and it's stupidity, places like this where meant to stay just as they where, peaceful and other worldly in its serenity. He just wished that what should be, could be.
Show hidden low quality content
You must log in or register to reply here.
Share:
Reddit Pinterest Tumblr WhatsApp Email Share Link
Top Bottom