NOTE: They say that a picture can tell a thousand words; this challenge aims to see how many words our members can tell from a picture. Each week an image relating to a certain genre shall be posted, and members are challenged to see what sort of plot, character or idea can be developed from it.

CATEGORY: This week, the category is DEMONIC.
And so without further interruptions... 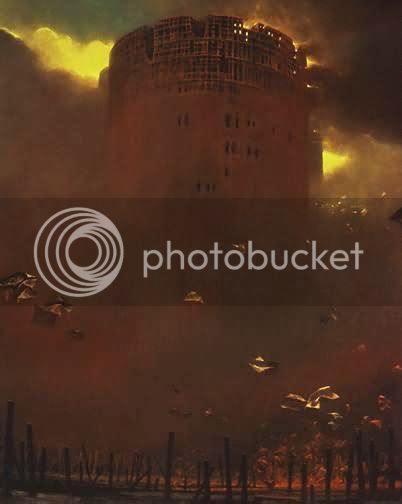 Next week's category will be RETRO SCI-FI.
L

The largest structure in all of Hell.

It towered above the dark twisted trees of the dark forest that cowered below it in its great presence. Even though some parts of the building were crumbling, it stood sturdy and tall and breathed a sense of fear into all who laid their eyes upon it. From the open top, a large swarm of black flew up into the air, the sound of maniacal laughter coming from it. The Swarm Demons were being birthed from the great belly of the Colosseum and now were flying upwards to the Middle. Earth. They craved human suffering, blood, and fear. From their summoning place inside the building they lurched forward in their huge cluster and spiraled upward in a great display before a large enchanted circle appeared in what could be described as "Hell's sky". The demons entered it, disappearing while bringing their insane giggling with them. When all of them had entered the circle, it shut with a hush and the sky was empty again. A bitter silence now took to the air.

Aella walked towards it, the black cord from her prisoner collar beckoning her forward. Her feet forced themselves to walk towards the frightening building towering over her, promising nothing but bad.