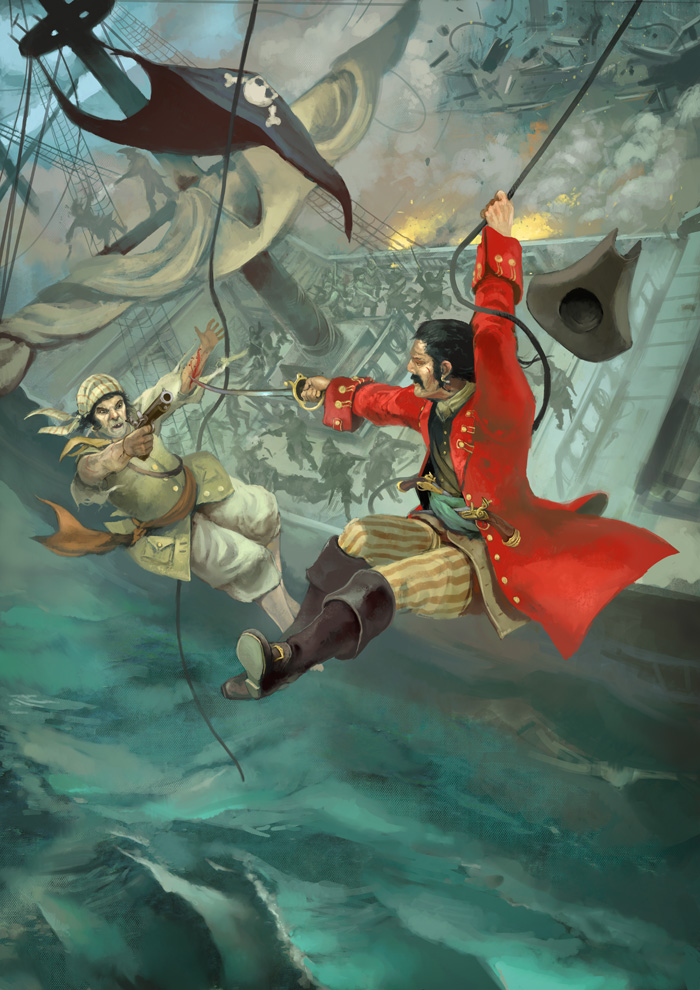 
"Yarrrr! You be thorn in me side fer way too long, Red Coat!"

"Ha! A savage scum such as you has no right to be in these peaceful waters, terrorizing innocent people!"

"Your crew have lost! Your ship is sinking! Surrender, Yellow Bandana!"

"Then, so be it..." With one decisive stroke, Red Coat struck a blow against Yellow Bandana's left arm, unsettling his hold on the rope.

"I be waiting fer ye in the Davy Jones' Lockerrrr!" Just before he fell, Yellow managed a single shot from his pistol, but it missed, hitting Red Coat's hat instead, then he fell into the ocean's depths.

"You were my best friend, sad it has to come to this, but every sailor chose his own path..."
Reactions: redblood

"Mwahahaha! I got you!" Captain Mustachios was rather proud of the teeny scratch he managed to draw on his mutineering first mate's arm. Even flailing wildly on ropes, he was clearly the better of the two!

"Oh yeah?" The first mate's pistol swerved down as he aimed and shot the captain's boot.

"Arrrgh!" In his pain the captain the captain dropped his sword and reached down with both hands to tend to his foot. "Wait-" Only then did he realize that if both hands were pulling off his boot, he wasn't actually swinging on a rope anymore. "Aaaarrrrgh!"

"Fool." The first mate swung back on board and waved with his pistol. "C'mon lads, back to attacking the other ship! Show's over!"

"You had nerve ta attack me ship NoBeard!" BlackStach said with a nod, but it was a sorry mistake all the same."

The sword swiftly came across and sliced at NoBeard's arm effectively causing his grip on the rope to falter. As he fell he carefully aimed the gun at the other man, but the singing and the distractions of the battle that raged all around skewed his aim, but he did manage to graze his side. A smile curled his lips as he hit the water, satisfied that he'd at least drawn blood before the sea claimed him.

BlackStash swung round and rejoined the battle on the deck of his ship, that was in danger of sinking wondering if he soon would be joining his old nemesis that day in the deep or not.

The two men dangled from ropes, circling each other with loaded pistols as behind them the men fought on valiantly aboard the Sally Mara. This was to be their ultimate fight, the moment when all grievances were to be laid upon the deck and sorted out. It was time to end this long feud between them, and settle the --

Everything crashed to a halt as stuntmen lowered their swords, and the two actors dangling from ropes stared down at the director with disdain. This was the fifth time he'd called for a cut during this particular sequence, not to mention the fifteen or so before they'd even managed to get off the ground. It was always something with him.

"Look, you two, you... you look like you're constipated," the director said, shifting his thick-rimmed glasses over his modest nose. His curled mustache bristled with distaste as the two actors gave him disapproving looks.

"You do! This isn't a commercial for Ex-Lax, you're scurvy pirates trying to kill each other. Get it together, guys, really. And riggers - not so rigid up there, okay? I want it to be more natural, you know, a little bit more of an uneven swing."

"But," one of the riggers on the massive scaffold above them began, "if we do that, they might accidentally hit the green screen, man. You know how long it takes to put up that thing all over this place? They'll tear the thing down."

"Make it happen!" the director shouted, sitting back down in his chair while the two actors were lowered to the ground.

"If he calls cut one more time, I'm gonna run this sword right through his eye," one of the leads muttered to his cast member.

"Hey, leave me some - I wanna shoot that mustache off his face," the other said with a grin, wagging the fake flintlock he held, as the other man slapped his coworker's shoulder and they went back to take their places for the umpteenth time.
Reactions: noodle
Show hidden low quality content
You must log in or register to reply here.
Share:
Reddit Pinterest Tumblr WhatsApp Email Share Link
Top Bottom