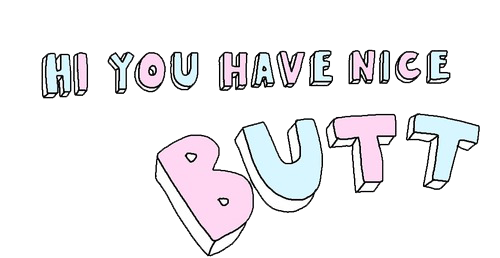 Welcome to my little thread.
Where we mix together nuts, plot, procrastination and imagination into a a magical treat.
The only missing ingredient is you!
​
Hello! I'll try to make this as simple and easy to navigate as possible- since my other threads were a little more confusing. Let's get straight to business, aka, me telling you about myself. I'm a twenty year old girl juggling anxiety, depression, my failing health, a demanding part time job, and my mothers multiple surgeries....Sounds like i'm a downer, huh? I promise I'm not! I just want to make one thing clear i'm an insanely busy person and may not be able to reply on the drop of a dime.

I'm extremely friend and enjoy a good time- but don't like irl drama. I'm ok with drama IC but if you start stressing me out OOC you can bet RPing with you will become a chore. I RP to unwind. It's a hobby. Stress me out and I'm done.

I tend to like to play submissive characters this DOES NOT mean i'm a submissive rper. I'm the kind of person who will suddenly dream up plot twists and throw them at my partner while I giggle like a moron. I don't like to be the only one evolving the plot- so please give a push now and then too!

I'm big on writing- it's fun for me. I enjoy writing almost as I enjoy reading the writing of others. So when someone send me just a one liner it really bums me out. Please don't apple if your role play style is only sentences at a time.

This isn't a libertine search- but if we are in the same age group i'm willing to make it libertine. I will warn you that I do not like sex heavy plots. If it feels natural or goes well with the story i'm all for it. I will always look for a good plot first.
1. I'm a busy person an so I won't be here to often. My posts can go anywhere from several a day to once a week. I'll do my best to let you know if i'm going to be gone for awhile but sometimes stuff happens. Alright?

2. This is a hobby, aka, not my first priority. Please understand this. I have had to leave for medical reasons more then once and on more the one occasion have had people angrily message me because I wasn't around. This doesn't really do anything other then make you look like RP is your first and only priority. Please don't do this. Understand my posting schedule is questionable at best. I'll do my best.

3-A. I like to play submissive character. Submissive gay males, and submissive females in general. This doesn't mean I don't want to help steer the plot. I'm all about plot and building.

4. I enjoy reading others writings, so please strive to post at least a paragraph.

5. I'm willing to make it libertine. But I don't want it to be pure smut. Keep it plot heavy- please.
IDEAS


The Prince of the kingdom(MC) has never been known for being the most manly royal there ever was. In fact it was surprisingly common for foreign dignitary and the common person to mistake the prince for, well, a princess. In fact, even dragons would mistake him for a princess. Thus going out of their way snatch him up in common dragon fashion. As of late a certain dragon(YC) keeps snatching him up, despite learning his gender.

MalexMale
A wild boy(MC) living at the edge of the wilds since a very young age, never learns to fear dragons as every young child does in their day and age. He never fears them, he befriends them. Several years later he finds him self a regular blacksmith by day, and something so much more by night. He is the mysterious and much hated Dragon Rider. He and his best friend, a dragon he''s know for as long as he could remember, do whatever it takes to save dragons from the clutches of dragon hunters under the cover of darkness. He is the only thing standing between the dragons and extinction. So what will happen when a young but promising dragon hunter(YC) sees his face while on a raid?

MalexMale
When your born you have two colored eyes. One is yours, and the other one is your soul mates. You will spend your whole life looking for the one, and only know when you find them by seeing your own eyes stare back. Seconds before it swaps back and your eyes are how they were always meant to be. That's how it's always been, it's how it always will be.

MalexMale
A classic tale of one child telling the other they are going to get married when their older. Both agree, but (YC) carried to agreement into adulthood even if (MC) forgot! 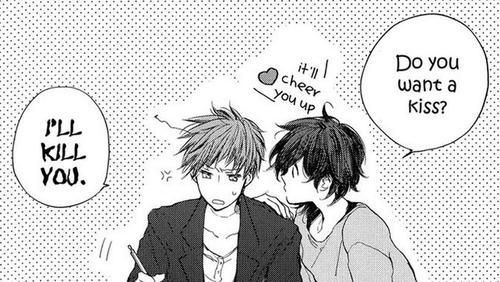 The fake gay for each other jokes were funny to (MC) at first, until their best friend (YC) kept at it for years after it started.... How was (MC) to know he was serious from the beginning!? 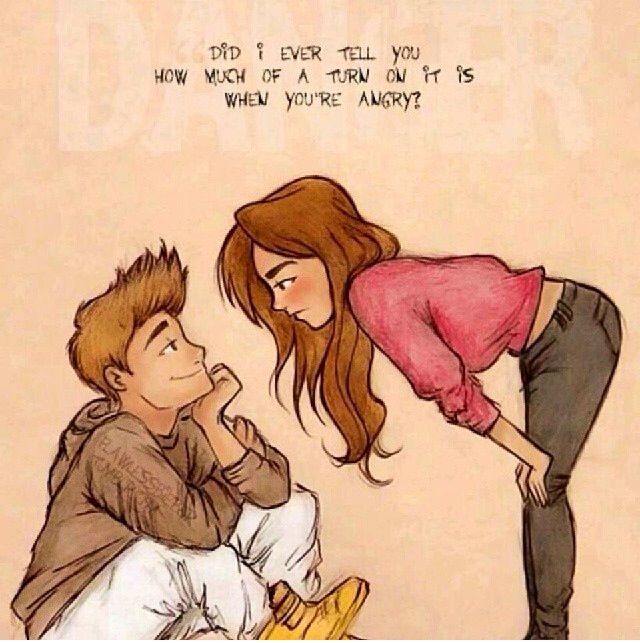 (YC) flirts by bulling (MC) and makes it no mystery that's why they do it. Doesn't make (MC) like it any better. 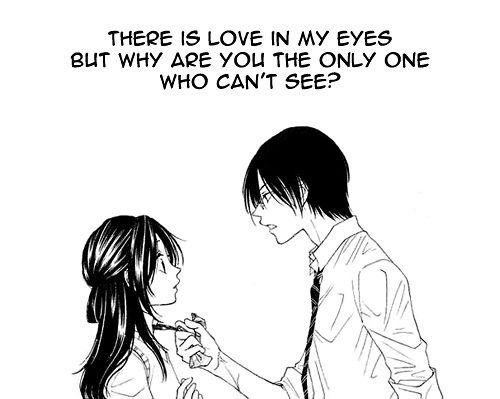 (YC) has always been hard on (MC) through out their high school years. (MC) always thought (YC) just didn't like them. Out of the blue, with only a month of school left, (YC) drops the bomb shell: "Everyone knows i loved you, why don't you?" Can (YC) make (MC) fall in love before they head off on their different paths in life?


The mafia life style wasn't what (MC) ever dreamed for themselves. And yet, here they are, in the beginnings of adult hood and tangled deeper into the darkness then they could have even dreamed. All thanks to The Boss (YC) getting their claws into them. Can (MC) stop this downward spiral? Or will (YC) corrupt them completely.


(Hinata/Kageyama, willing to double up)

As far as sports animes go, this is my favorite. And i'm all heart eyes for KageHina.
Wanna RP it?
I'll rp it 12 ways to sunday.
Only issue? I haven't started Season Two yet - so avoid spoilers please.

I'd want Hinata and i'd you to take Kageyama. Dom/sub-wise i'd like them to be switch. I can;t see either one of them willing being the submissive partner in a realtion ship.

A fast pace and suspenseful "murder game" style Anime.
If you haven't seen it, I recommend it. The ending get's a little muddled but the wrap up is worth it.

The anime gets a little dark, so if you have a weak stomach i'd suggest looking into the clean version or staying away from it all together. The end game isn't Yuki and Aru but it's heavily implied and haves several canon scenes that made my little shipper heart go nuts. Canon one sided romances are the worst and best all at once.

I just want an AU where they two of them hook up and are happy!

I would play Yuki(sub, duh), and would like you to play Akise.

(Naruto/Sasuke, willing to double up)

For a short time this was one of the most widely animes out in the west.
It's still hard to find someone who hasn't at least heard of it. I'm pretty smitten with the SasuNaru pairing, and have been as long as I can remember being in the shipping business. I'm looking for a RP that keeps them some what in character, I realize they will break now and then because the characters are not ones of our own creation. I would like to roleplay the pairing in one of three ways:

1.Pre-Sasuke running off
2.AU where Sasuke came back
3.flat out AU

I'm willing to play it other ways if you pitch it to me well!

I'd like to play Naruto while you take Sasuke.
Usually i'd say dom and sub here, but let's be honest.
Naruto and Sasuke would fight like cats and dogs over who's dom, so why label it?

One of the most recent 'choices' games to hit the market, and a darn good one at that.
My only upset is I don't like that you couldn't help josh. He was sick and you couldn't help him. :c I'd like to have a RP where he got a little love at least!!!

I'd either like Chris to go back for him, or an AU that allows them to be togather

I do not care which role I play.

A short thesis film created by Erica Wester.
Cute and light hearted in nature, the over all themes of this short are surprisingly dark consider the tone. Some of the themes aren't for the easily offended or faint of heart, but i assure you the piece in it's entirety is quite light hearted an humorous.

It follows the story of a young boy names sock who meets his grisly end and ends up in hell where he is offered a job the haunt a teenage boy name Jonathan. His job? Convince his target to kill himself. To bad he sucks at his job.

I would like to play Sock(Sub), and have my partner play Jonathan(Dom).

Hi! I'm really interested in doing this with you, I like the Mirai Nikki Idea mainly because it was the first anime I ever watched and my heart longed fo yuki and Asike to be together. That is mainly what I would like to do with you.

Meggie said:
Hi! I'm really interested in doing this with you, I like the Mirai Nikki Idea mainly because it was the first anime I ever watched and my heart longed fo yuki and Asike to be together. That is mainly what I would like to do with you.
Click to expand...

Alright! Did you want to discuss more in a Convo? If so shoot me one and we'll get on setting it up tonight :3

I like the 'it's not funny!' Plot idea; maybe as a really low-key, fluffy thing. Maybe starting at Christmastime? Drunken/buzzed holiday party flirtations, anyone?

It'd have to be a slower pace though; once a week to once every two weeks. I'm a full time student who also works and does extracurriculars :/
Last edited: Dec 15, 2015

Minibit said:
I like the 'it's not funny!' Plot idea; maybe as a really low-key, fluffy thing. Maybe starting at Christmastime? Drunken/buzzed holiday party flirtations, anyone?

It'd have to be a slower pace though; once a week to once every two weeks. I'm a full time student who also works and does extracurriculars :/
Click to expand...