[OOC] Down With the King

Original poster
You are a werecat. You live in a country full of other felines just like you. Outside your borders are other wereanimals - werefoxes and werewolves and dracos (not dragons, but dragon humanoids) and tengu. For once there is total peace between the races.

However, that doesn't mean all is well.

Within the country a tyrant has risen and overthrown the and named himself king. Since then the country has fallen into ruin.

You are part of a bad of rebels, training in secret beyond the eyes of the king. Now you are preparing a small group to travel to the other countries to try and gain allies.

You will overthrow the king so that your country will prosper once more.


Characters:
Must be a feline humanoid. You will have fighting experience as of the beginning of the roleplay. You will wear armor and may carry a weapon despite having claws and teeth if you would like. One person needs to be the rebellion leader.


Allies:
Werewolves
<img src="http://werewolfman.webs.com/photos/werewolves/chained%20werewolf.jpg" align="left" width="100" height="125"> The werewolf leader. He is firm but fair, but has never like the felines. Still, there is always a chance to prove your worth to him and gain him as an ally.

Dracos
<img src="http://www.deviantart.com/download/19625345/Lizard_man_by_Epantiras.jpg" align="left" height="100" width="100">The draco leader. Dracos are a savage race, but a strong race. What they don't have in technology they make up for in brains and brawn in the ways of fighting. They are quick to jump into a battle.

Tengu
<img src="http://t1.gstatic.com/images?q=tbn:ANd9GcQMR5NHRNKl8a5jxd3ULV0hDZVamPU2i3RqkJ4gxtWHtb9FMGTSv3eNT8IaBQ" align="left" width="100" height="100">The tengu leader. Tengu are fierce aerial fighters, and love to take to the sky. However, they are also a very territorial race. To find and get close to them, you will have to travel through the harsh wintery northland mountains.
J

Name:
Type of Werecat: [tiger, panther, lion, etc]
Appearance: [picture or description]
Personality: [what makes you you]
Additional Weapon(s): [besides your claws teeth]
Brief History: [what event(s) triggered you becoming a rebel]

Also, only looking for up to 8 players.
J

Original poster
Name:
Type of Werecat: Panther
Appearance: <img src="http://www.qnwn.net/home/www/images/gallery/creatures/shapechangers/qc_werepanther.jpg" width="100" height="125">
Personality: He is silent but very firm in his beliefs. He will not leave any of his comrades behind.
Additional Weapon(s): <img src="http://thedarkblade.com/wp-content/uploads/two-handed-great-scimitar.jpg" width="75" height="75">
Brief History: He was just a teenager when it happened, when the previous government was overthrown. He wasn't as loud about his protests as his friends so he was never caught or thrown in jail. He became a perfect citizen on the outside, but inside he was seeing every flaw and trying to figure out the advantages he could use them in. He became a silent warrior, doing what he could to sabotage when he could. And eventually, his own family was taken from him while he was out training under the guise of hunting. He never showed his face again in the kingdom, a wanted man despite his silence.

*posting interest in this*

Even though they're feline humanoids, can they walk on fours if they choose to, or do they have to walk on two legs?
J

Original poster
They can walk on all fours if they choose. I have nothing against that. But I would rather they only walk on two unless crouched for the sake of not having to ignore anatomy.

okay, because I have in mind a jaguar who is used to fighting, but has shorter legs, so when they chase they sometimes hit all fours to go faster. Just wondering because the picture you put up is digitigrade (non-human leg anatomy)
J

Original poster
Huh, you're right. Well, hell, go for it. That could be pretty fun, actually. Good eye!
K

Something like this: the Aztec were-tiger... But yes, he would mostly walk on two, unless tracking, sneaking, chasing, etc. 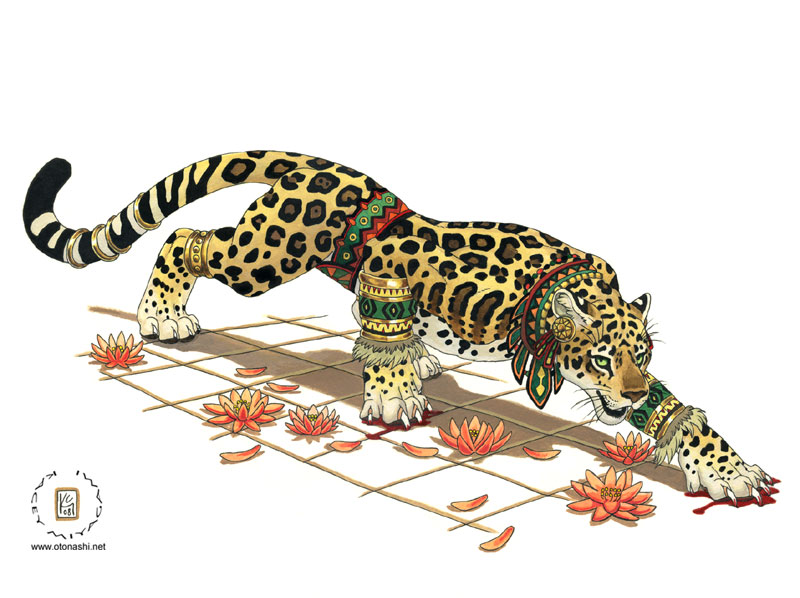 Original poster
That looks good to me.
Sorry for taking so long to say so. ^^;
K

Original poster
My guy will kill people. . . he likes blood. . . very much in fact.
J

Original poster
Just make sure that those you kill are not the allies. ^^;
K