Of Love and War

Original poster
Angels - two different types. The Seraphim, white winged angels, and the Valkryies, the black winged angels, have been waging war over territory for as long as they can remember because the territory, a sacred place, supposedly contains an herb that no one knows the use for but its precious and only grows in this territory.

Imagine Australia being split up into three parts - Western for Seraphim, Easter for Valkryie, and the Central being Neutral because of the humans, which is also where the fighting seems to take place. Humans have taken sides as well, going so far as to fight each other at times when someone has brought up their opinions of the other's favored side. Plus there's the island territory that contains this herb they're fighting for that no one knows what its for.

Seraphim control the elements of water and earth, and fear fire.

Humans have the ability to master all elements - fire, earth, water, air, and spirit.

The world is just as modern as our own, but is only as advanced as our medieval times with its weaponry. Imagine walking around with a sword when you go into Wal-mart, though its not called Wal-mart.

In this world, there is a war between the Seraphim and Valkrie, and the Human tribes have taken sides. However, what will happen when a set of twins gets involved, one with a Seraphim and one with a Valkryie?

This is not "good" versus "evil" but rather a fight over what belongs to whom.

The premise of this story is that the war has waged for two or three millenia. Angels only live for up to two centuries, and most do not reach that because of the war, though over the last couple centuries they have come fairly close because the war is coming to a stand still. Both sides are slowly dwindling in numbers, and the humans have started becoming restless with the way things have been going on. Soon there will be a war larger than they could even imagine. Fortunately, there are still humans loyal to each side of the angels.

Angels have a more human form where they retract their wings into their backs, but they can still be identified by the scars where the wings would usually be. They also can be identified because Seraphim are usually more pale than humans and Valkryie tend to be darker, a dark tan to almost black skin tone, compared to most humans.


The roleplay needs at least four to six people, and no more than seven or eight. I need a set of twins and at least one Seraphim and one Valkryie, preferably two of each race at least for conflict. Yes, this is a forbidden love story.
K 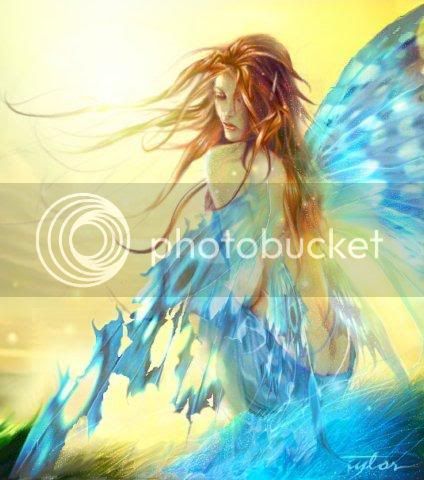 Personality Description: Despite her light and fragile appearance, Eridia is very passionate in every emotion that she experiences. When she's angry, her fury is terrifying and when she's happy, she can brighten rooms. She is very willful in her beliefs and is not easily shaken.

History:
The war that has raged has been slowing for most of Eridia's time and as such, her life has been generally peaceful. There was little warring going on when she was small and it has nearly come to a standstill now. The world that she knew was one filled with grief and loss, members of the seraphim grieving deaths from the beginning of the war to now. Despite her young age, her time has been mostly spent in the council rooms of her people, who hold her in fairly high regard for her insight, which is great even when she's angry.

When she had free time, Eridia will frequently take leave and visit the border between the seraphim land and the human land where children from a nearby human village will sometimes play. Eridia discreetly plays games with these children and takes immense joy in speaking with them as they are innocent and untouched by the grief that plagues her people over their losses.
Z

Original poster
Name: Zalia
Age: 22
Race:Valkryrie
Role: To be in love with one of the twins
Physical Description:

Personality Description: A typical loner. but she has a love for animals. She wont harm a single animal. She has a hard shell to crack it is very rare. If you do crack it it is very dangerouse to betray her or harm her. If you do harm her she will release uncertainty on you.
History: I have grown all my life with noone to trust. I was an orphan. I grew up on the streets. I knew how to take care of myself. One night as i was finding some food the world went black. I woke up here unawair of where I am currently. Tying to find my way to the place i call home.
J

Original poster
It's fine, Zalia, just play with your history as it comes to you if you need to. I would like a couple sentences there though if you can.

Now we just need twins... and a couple antagonists.
Z

Original poster
I can work with that, I think. Works for me. :)
Z

Original poster
I have convinced one person to join if we need people but he's waiting a little longer to give people a chance. Kitti, are you having any luck?
Z

Original poster
All right. Cool. Let me know if they're interested and what role they want to have.
Z

Original poster
Well, Jovi dear~
I have not been asking around as diligently as I could have been.
I can take a looksee of some people though. :3

I'd be happy to Join~

What Kind of Roles need to be filled...? And thanks for Linking Me Kitti~

I'd like to play a Human Antagonizerator. I'm just not sure how to antagonate.

Character Sheet:
Name: Ardin
Age: 21
Race: Human
Role: Love Intrest for Seraphim
Physical Description: Ardin has Ivy Green eyes and shaggy, but tame Rich brown hair;
Medium Build and has lightly tanned skin, Is about 5' 11".
Personality Description: Patient, Sometimes Spontaneous, Friendly, Childlike at heart but knows what he needs to do
when responsibility comes up
History: He has a rather scarred past full of tragedy but he hides that all under his personality. He comes by and likes to play wit the kids because his little siblings were lost as a child. He lives by himself in a apartment and he works odds and ends jobs to make a living.
J

Original poster
Great! Now we just need the other half of the twins. :)
Z

Original poster
If we find no one else interested in the other half of the twin, I'll play it. Had antagonist all planned out, but I can change some things to make the other twin. It'd be cool with me. What do you guys think? If Effort gets an antagonist in, I get the twin in, and I con my brother into playing the other antagonist, we'll be all set to start.

Effort, you're basically against the fact that someone from your "race" loves another race. Could be a character in love with that character. Could be someone who is so against the idea that he/she can't even begin to imagine the concept of interracial love. Just against the idea.
Z

Original poster
I'll work on creating the other half of the twins then. And conning my brother into playing if Effort gets a character in.
Show hidden low quality content
You must log in or register to reply here.
Share:
Reddit Pinterest Tumblr WhatsApp Email Link
Top Bottom