I'm not a licensed therapist, nor do I have any formal education in the area of psychology. While I can claim some level of personal experience with the following subject matter, personal experience does not equate to a professionally guided education. As such, be aware that this guide is only being made to show how to use these as character devices.

That being said, while I appreciate corrections to my knowledge on such subjects, I please ask that if you're going to make a technical correction to a definition or similar, that you properly cite your sources.

No, Wikipedia doesn't count. If I cite it, it's only to give cursory knowledge on a subject, not to speak with absolute knowledge.

Before we continue, it should be ideally noted that Mental Disorders shouldn't be used until you have a good grasp of character design. Mental disorders will affect nearly every aspect of your character, and need to be incorporated to the very core of the character's personhood to function properly. Ergo, if you still struggle with making and writing characters, don't use mental disorders. This is basically flipping on the hard mode switch in character design.

The first question one should ask themselves before creating a character with a mental disorder is why. Why are you making a character with a mental disorder? Could they manifest their set or series of behaviours without it? Realize, first and foremost, that mental disorders will impact your character's total possible range of actions and emotions in a negative way: Someone suffering from depression will have a harder time (sometimes an outright impossible time) trying to manifest determination. Someone suffering as a sociopath will have a difficult time giving human life any value, and that obviously limits their capacity either for heroism or for selfless affection.

In essence: Mental Disorders don't grant access to unique powers, they don't give you unique emotions. They give a unique perspective, but only because of the lack or excess of one (or more) emotion(s), and/or a malady of logical capacity. Mental Disorders are strict limiters of what your character can and cannot do. Most, if not all mental disorders, are defined by what they take away.

The second question one should ask themselves before creating a character with a mental disorder is if the character themselves knows if they have a disorder, or if they've self-diagnosed. It's not uncommon for people who have disorders to attempt to diagnose and treat themselves rather than seek help, and so it's perfectly acceptable to state that your character has a disorder of unknown origin or archetype. This frees the writer (you) from the burden of knowing how a disorder actually functions, allowing you to explore a character with only one or two symptoms, rather than a full-blown disorder.

The third question one should ask themselves before creating a character with a mental disorder is if the disorder would interfere with the character's ability to interact with other characters and drive the story forward. If your character has a crippling social anxiety disorder for instance, this might prevent them from being able to move the story forward, causing them to lock up in a location and then leave you with nothing to write for them. If the disorder is severe enough to prevent your character from completing the story, all you accomplish by creating them is wasting everyone's time. Including your own.

Now that you've gone over those three questions, the next step is to determine what you want the mental disorder to do. What are you aiming to use it for? What is its purpose? How will it make your character struggle? How will it manifest itself, and how will you express it with your character? For instance, if they have depression, how do they handle negative emotions like sorrow? Most importantly: How do they live with it? What are their coping mechanisms? Do they take medication of some kind, or if the setting includes magic, do they use that to treat it? Remember, if your character can't function in the story, then you're wasting everyone's time with it. Therefore, you have to find a purpose for the disorder, and a method of coping with it or controlling it.

Research: No matter how well you think you might understand the subject matter at hand, you'll likely want to at least brief yourself on a disorder you're interested in incorporating into a character. Wikipedia isn't a bad way to get introduced to the concept, but if you want verifiably sourced information on disorders, PsychCentral will likely have more than enough information for you to derive a pretty solid understanding for a character. Also keep in mind the second question: It's perfectly acceptable not to use an entire disorder and not to name your character's disorder, and focus on wielding only one or two symptoms. Nobody creates a perfect piece of Robert Frost-level poetry on their first attempt, they practice to get it right. The same can be said of disorders: Practicing with one or two symptoms of an unknown or un-diagnosed disorder, before attempting to tackle a whole disorder, is a great way to practice, and give yourself more flexibility with your character.

Fantasy Disorders: Are you in a fantasy role play? Science-fiction? Alternate reality Earth with wizards and magical school girls and far too many tentacles robots and androids and so on? Ever considered creating your own disorder, say, as the result of extraordinary circumstances? Like genetic experimentation, or magic? Space Dementia?

This also ties back into the second and third questions, since you could use magic or Clarke's Third Law to justify both new disorders and/or some form of pseudo-medication to keep them under control.

Since a lot of the information given about mental disorders also applies to physical disabilities, I'll focus on a few quick tips here instead.

Consider the setting you are in: If you're creating a character in an environment with magical healing or super-advanced science fiction technology, being blind, mute, or possessing some other crippling physical disability probably violates the world's mythology. You'll likely want to ask the GM (or your partner if it's a 1 on 1 RP) about whether or not your physical disability of choice would still be present in such a universe.

I cannot emphasize enough to avoid physical disabilities which completely cripple you, because they will severely limit your options and in many genres of storytelling, make you literally incapable of contributing. Unless you can find a way to circumvent something like blindness--like Daredevil does--or you're in a story where such a crippling physical disability doesn't matter to the plot--like a high school romantic drama--don't use them. Just don't.

If you have any further questions about the subject matter, feel free to ask. Otherwise, thank you for reading. Here, have a ferret.

Gaaawwwd such a Mental Disorder Nazi/conformist, go back to your home on Disorder Island >:{

All jokin aside, well done, Brovo :D. Hopefully people will learn something here, yaknurwatimean.
A

I'm loving these avatars, btw. Babylon 5, absorbed through my mother's innumerable VHS tapes, was a major part of my childhood which probably shaped my love of fiction (since it came before my ability to read).
Reactions: Jorick, K3l, Darog and 1 other person 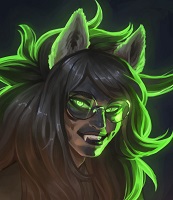 I actually accidentally developed an OC with mental illness before. She'd been a work in progress for so long that when I finally tried to do further research on some of her traits and problems, I found some pretty solid parallels/signs of dissociative issues. It's so much a part of her that I can't even think of changing it just to make things simpler, so finding good sources and guides like yours is a big help.
Show hidden low quality content