May I kindly request a drawing for my character?

Original poster
Hello and thank you to any artist who might click this thread. Instead of writing an elaborate piece i will just get to my point. I am in need of any willing artist who would be willing to draw out a character(s) for me. They are original characters of mine. But the thing is, is that I have created this character 6 years ago. And he has a very rich personality and history but, unfortunately does not have an image which I can look at and say That is my character. That is how he looks likes because for 6 long years, I have never been able to put a face for him.

My preferences are compatible with any art style but I usually lean towards the anime/manga, realistic anime/manga, or just realistic. Primarily because even with anime styles, the persona of the character can still be seen.

And on a final note, I swear by my mother's name, that I will NEVER falsely claim your work as mine or steal it. I Shall ALWAYS credit your work when using your artwork and my sincere gratitude if you are willing to help me because for me, nothing kills me more than having a character which I've grown to like for 6 years and not being able to see a visual representation of him.

So without further ado, here he is:

[spoili]
Name: Alex Vincent Sashi
Gender: Male
Species: God/Demon but also human
Age: Psychical body is 215 years old but being immortal he retains the body of an 18 year old. His true age is unknown. Possibly born from the start of time.

General Appearance: Alex is 6 feet tall and looks just like any other human being. He has a lean muscle build. Not too muscular but not too little. Just the right amount of muscle build. Alex does have a feminine like figure as if one were to see him in a skirt, they could possible mistake him for a girl and not a boy. but still retains a masculine body. He does have an averagely defined jawline but also his face is big enough to balance out the rest of his body and has a pointed chin with his lower part of the face curving inwards slightly giving a feminine vibe but still retains a masculine like face. He has a fair skin tone and has dark green eyes. His eyes looks are very innocent and cheerful. His hair is slightly messy with some small hair pieces sticking out as well as his side-bangs being slightly longer and his bangs being messy and crossing and partially covering his forehead. His hair stops just an inch and a half from his shoulders and still keeps the bottom parts of his back neck visible. His hair colour is a light blonde mixed with some darker blonde. He generally wears a pitch black suit with pure silver buttons. Three buttons at the front with two done up and three on each arm cuffs lined up vertically. He has blazer pockets on his bottom left and right side like any blazer and his small pouch is located where his heart would be which is on the left side. He wears a white long-sleeved buttoned shirt underneath and a pitch black tie which matches the blazer colour. The pants are also the same colour as the blazer and tie and the hems stop just above his black shoes which are slightly pointed and are polished black shoes. His suit is very well ironed and he looks very sharp and professional in a suite.

Facial expression: He usually has a faint but visible smile. More of a typical charming smile which he uses when he meets someone new or is at a formal meeting. But has a very casual but welcoming expression.

And for another image of his polar opposite personality, his features remain the same only his eyes are now blood red instead of dark green. And his eyes looks more sadistic and evil. His eyes are slightly narrow and gives off a very evil vibe as if he is enjoying watching others suffer.

His smile is replaced with a smirk like grin but very sadistic in vibe.

This is how his General's uniform would look like only the general lime green would be replaced by light grey. Every other colour not lime green stays the same.

would look like this except the same light grey colour as his uniform and on top where the eagle is, it is a stainless steel Eagle holding earth in it's claws. And right above the grey straps where the other blurred out image is, there are the words. A.U.S.M written on it exactly in stainless steel. The grey ropes are black and the white lines stay the same.
He has this style of Aiguillette going down his left side 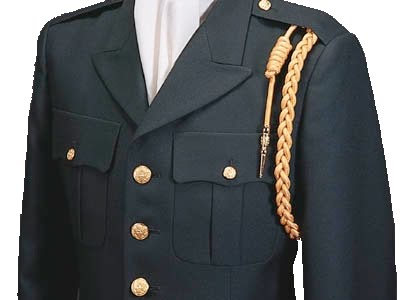 Except the ropes are straight and not tied and the colour is white.