It started with whimsical dreams and quickly turned into dangerous obsessions, humans being able to naturally posses magical qualities like that of superheroes. A group of enthusiastic scientists were bound to make it a reality. Year after year claws by, taking the scientists' youth and sanity with them. These magic wielding humans would do good for the Earth, helping scientific and technological discoveries to advance quicker than normal humans could ever manage. Finally, a group of five children are able to be developed with some form of these "magical" abilities. They were called Project M. Leap after leap is taken as this magical ability is passed on through their children, perfecting their skills with each new generation. Along with generations of these special men and women are generations of new scientists.

Very slowly, the select group of men and women weren't being used for good anymore. They were turned into weapons, soldiers. The emotions from Project M subjects slowly became numbed. They were war machines, fed a series of pills and medication to keep their emotions in check.

But what if one happened to have all his emotions in tack, all medications and surgeries doing nothing to numb the intensity of life rushing into him? What if he became so desperate to have everyone else feel the same emotions that he starts to talk to others about not taking their medication? What if when some come off their medications, they end up being mentally insane? What if....

What if they all escaped?

(Looking for someone to be the person in Project M that has all his emotions and tries to desperately make other subjects "live life" with him. Will be a dominant. Need someone who would be willing to share their ideas for the roleplay as well so we can advance the plot. No godmod allowed. My character will be a regular citizen that runs into your character after everyone from the lab manages to escape)
Last edited: Jul 29, 2015

Hopefully we can keep this one alive, if you'll *notsosubtlehinthintcough* play with me. Noother yeaow-y, shall it be?

Yes, we do meet again.
It is the yaoi. It qluld new fun to try again

The weapon who refused to fight

60216 was born and bred a fighter, one of the rare humans with powerful magical abilities entered into military service literally at birth. He watched as years passed he and his brethren taking the endless stream of medications that made them into numbed, mystic war machines. The medicines never worked for him, though. He saw what happened to those who refused "treatment" and decided it was best to just play along, and his became a well-known name amongst the ranks for his skill in the use of his magic, and earned the nickname of Prodigy. When he became an adult he was allowed to choose a name, so as to "fit in" with the local crowds in enemy territories. He chose the name Johan (Yo-han) Spiritwake, but was often misspoken as Joe-han, and eventually just John. He was just a few years away from deployment, when he realised he was sick of it. The medicines. The emotion suppression. The rigorous training to do atrocious things. So, he did the only thing an "aware" mind in his situation could do. He started a revolution. Over the course of a year, he convinced his fellow magic wielders to secretly stop taking their medicine, and eventually to refuse it outright. As the others began to realize just what they had been missing out on, and what they were being forced to do, they decided to put their talent and training to good use. Staging a massive breakout, the now lucid (and mentally unstable) magic users broke free from the military base during a shift change, killing anyone who got in their way and stealing a number of military vehicles to flee from. Many died during the escape, and more have been captured over time, but Johan remains one of the handful who hasn't been so much as spotted by military surveillance. He lived a quiet, happy life, practicing his magic peacefully in secluded places, enjoying his now total emotional freedom. That is, until he met a man who turned his whole world upside down...
Reactions: el11korea 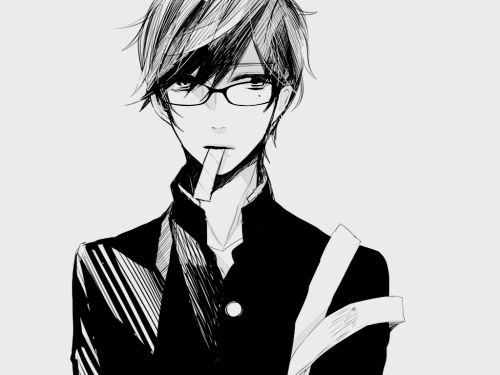 Partly named after his great grandmother, Austin often loathed his middle name and found it interesting how he never even knew the woman. That being said, his family moved into his great grandmother's home shortly after her passing, which just so happened to be in a small town that feels like it is located in the middle of nowhere. It is surrounded by grassfeilds and wildflower patches, a few hills nearby supplying a few caves for the locals to be weary of. He lived a normal life, graduating high school, then college with his Associates degree, before finally ending up back in the quiet town. Finding work at a library and in his family's small rocks and minerals shop, Austin moved out to an apartment complex that laid on the very edge of town. He often took walks along the grassfeilds in his freetime and visited the highly gossiped caves just for the back of things. Everything in his life seemed to be going quite normaly, until he met someone extrordinary, being pulled into a world he never knew existed.
Reactions: Thomas McTavish

My hands are achey lately, so it's going to take awhile for me to post. Apologies in advance.

It's all good. Sometimes my muse enters little comas and I end up not replying for almost a week. ^_^;

Just tap my tush when I go quiet for too long and I'll get on a post asap.


As for the pictures thing, I've got the exact opposite problem. Dozens and dozens of pictures for characters I'll likely never use, but keep just in case. XD
Reactions: el11korea

How do you find your photos? Maybe that could help me with my search.