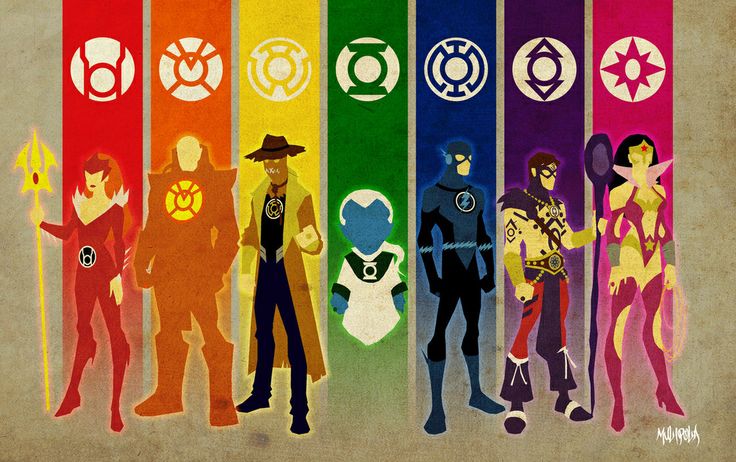 Many know of the legend of the Green Lanterns, a corps of individuals selected by the Guardians of the Universe to protect life and preserve peace throughout inhabited space. Wielding the green light of willpower by channeling it through their signature rings, the Green Lantern Corps had monitored countless worlds and maintained order in times of need for eons. The Guardians' homeworld, Oa, served as headquarters to the Corps as well as a beacon of stability and strength to the universe at large, a bastion against the chaos and strife that often threatened the lives of sentient beings in places where justice was scarce and villainy remained unchecked. The Lanterns served as peacekeepers, enforcers and protectors, opposing the forces of evil at every turn.

But there was one threat so fearsome, so inconceivable that not even the near omnipotent Guardians wished to acknowledge its existence. Spoken of only in the secret pages of the ancient Book of Oa, the truth of the prophecy known as The Blackest Night was suppressed and eventually all but forgotten. The Guardians, choosing to believe in their great power and wisdom and the ceaseless vigilance of their agents, the Green Lanterns, ignored the fate foretold by the prophecy; that one day their time would come to an end and darkness would engulf the universe.

This was not the only secret the Guardians kept hidden. The green light of willpower was but part of a wider spectrum, a series of energies derived from the light of Creation itself that had exploded into the universe following the Big Bang. These forces, each of them tied to a different emotion, had been locked away when they were discovered by the Guardians, who chose the most stable of them to power the Green Lanterns' Central Power Battery. The Guardians knew, however, that one day they would have to call upon these lights to prevent their own doom, as only the White Light of Creation could possibly defeat the Blackest Night.

Time passed and the Guardians, the Green Lanterns and the denizens of worlds across the universe presumed all was well. But sinister forces were steadily at work in the darkest of shadows. On the planet Earth, Death chose an avatar in the form of William Hand, a supervillain with the alias Black Hand. Through him black rings began to seek out the deceased and reanimated their bodies, giving birth to a gruesome horde of Black Lanterns. Even people who had miraculously returned from the dead fell under his thrall, eventually gaining enough numbers to make a fearful army of the undead.

But Earth was not defenseless. Hal Jordan, the longstanding Green Lantern who had watched over Earth and its surrounding sector of space, lead the charge against the Black Lanterns along with his fellow heroes and protectors of Earth, the members of the Justice League. Together they were able to marshall the entire Green Lantern Corps as well as wielders of the other lights, such as the Sinestro Corps, to challenge the ever-growing masses of the undead enemy. In the final onslaught, the lights were reunited to form the embodiment of life and creation, the Entity. The avatar of Death proved too powerful however, bolstered by every enemy the Black Lanterns had slain. The Entity was destroyed, and the darkness of the Blackest Night consumed the Earth.

With the Guardians and the Lantern Corps defeated, Earth became the new center of a macabre empire overrun by the undead Black Lanterns. The very lifeforce of the planet slowly drained away, leaving nothing behind but a desolate wasteland stalked by shambling corpses. The few survivors that remained were driven into hiding, the only heroes now left being too few to oppose the Black Lanterns.

However, a faint ray of hope remained. Although the Entity was believed to have been annihilated, fragments of its light still lingered, fueled by the living beings that defiantly refused to give up. Heroes and villains alike kept the spirit of humanity burning in their hearts, and these concentrated emotions allowed new rings to be formed. In time they sought out new wielders and granted them the power to resist the black,and together they banded together to try and save what was left of their world.

Can this League of Lanterns restore life to the planet, or will they too be consumed by the darkness?
​


So the idea for this RP in a nutshell is this: different heroes and villains from the DC universe on one big team. The twist is that they are all Lanterns of some sort, having been chosen by rings from the various corps. Play whoever you want, but try to pick the corps that is the best fit for your character. (More information on the individual corps to follow)

OCs are allowed, but they must also be a member of a Lantern corps. In addition, I will ask that you also play a canon DC character if you do make an OC.

Red Lanterns: Red Lantern rings are fueled by rage and their wielders are prone to going berserk, losing all ability to reason and reverting to an animalistic state. Their rings effectively take the place of their hearts and transform their blood into an extremely corrosive substance they can expel from their mouths.

Orange Lanterns: The Orange Light of Avarice often brings out the worst in its wielders, amplifying feelings of greed, hunger and jealousy. Orange Lanterns are driven to be fiercely self-centered and possessive, which has typically limited their numbers to only one at a time in the past.

Sinestro Corps: Named after the fallen Green Lantern Sinestro, members of this corps embrace the antithesis of the Green Lantern Corps' ideology, utilizing fear and terror to produce deadly constructs. Individuals chosen to join the Sinestro Corps are often beings who inspire great fear in others.

Green Lanterns: Perhaps the best known of the lantern corps, the Green Lanterns are identified by their rings as capable of exercising great resolve and willpower. They are trained to focus their will to create light constructs of myriad forms and applications. A Green Lantern must first conquer his or her fears to achieve full mastery of the ring or else face potentially deadly ring malfunctions or losing their powers all together. Once the most numerous and mightiest of the Lantern Corps, the Green Lanterns were decimated in battle against the Black Lanterns, with many of the fallen joining the ranks of their undead foes.

Blue Lanterns: Blue Lanterns are people who feel incredible hope even while facing the most formidable odds. Their rings have the unique property of supercharging Green Lantern rings as well as healing the damaging effects of Red Lantern rings. Away from Green Lanterns they are somewhat vulnerable and defenseless, only able to provide personal forcefields and the power of flight. Nevertheless, Blue Lanterns are invaluable to any war effort because of their ability to boost morale and kindle hope in the hearts of others.

Indigo Tribe: A mysterious and reclusive group of ring wielders, members of the Indigo Tribe dedicate themselves to lives of compassion for their fellow beings. Their ability to empathize with the emotions of others allows them to replicate the powers of other corps' rings. The secret of the tribe is that most of their members were once amoral, remorseless killers and criminals incapable of feeling compassion until their rings were forced on them. They carry staffs that contain their power batteries.

Star Sapphires: The wielders of the Star Sapphire rings have historically all been females. Their powers are drawn from their intense feelings of passion, devotion and romantic love. Star Sapphires are able to recruit new members by encasing people in crystal constructs that transform them into Star Sapphires.

Personality: (This should match some aspect of the Lantern Corps they belong to)

Powers: (Mainly for any superpowers they possess aside from their rings. It will be presumed that all Lanterns possess the same basic powers of flight, personal forcefields, construct creation, etc.)

History: (Origins and known backstory for canon characters can be left out. Just include something about how they survived the battle with the Black Lanterns, how they were selected by their ring and what they have been doing since. OCs will need a little more background.)
Show hidden low quality content