Original poster
This is old news, but...


Douches of Wikipedia said:
In the film, King Triton lives in a castle of gold, along with his daughters. The castle is displayed in the artwork for the cover for the Classics VHS cassette when the film was first released on video. Close examination of the artwork, as well as the film, shows an oddly shaped structure on the castle, closely resembling a penis. Disney and the cover designer insist it was an accident, resulting from a late night rush job to finish the cover artwork. The questionable object does not appear on the cover of the second releasing of the movie.

The second allegation is that a clergyman is seen with an erection during a scene late in the film. The clergyman is a short man, dressed in Bishop's clothing, and a small bulge is slightly noticeable in a few of the frames that are actually later shown to be the stubby-legged man's knees, but the image is small and is very difficult to distinguish. The combined incidents led an Arkansas woman to file suit against The Walt Disney Company in 1995, though she dropped the suit two months later. Allegations of sexual innuendo existed for several other Disney movies, including The Lion King, Aladdin, Who Framed Roger Rabbit, and Disney's 1999 original releases of The Rescuers, which were recalled due to the discovery of two photographs of a nude woman in the background of two frames of the movie. Those sexual innuendo had been removed in later editions.
Click to expand... 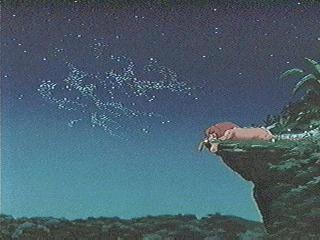 More Douches of Wikidom said:
In one scene of the film's original VHS and LaserDisc releases, it appears as if the word "SEX" might have been embedded into the dust flying in the sky when Simba flops down, which conservative activist Donald Wildmon asserted was a subliminal message intended to promote sexual promiscuity. The film's animators, however, have stated that the letters spell "SFX" (a common abbreviation of "special effects"), and was intended as an innocent "signature" created by the effects animation team. Due to the controversy it had caused, the scene was edited for the film's 2003 DVD and VHS releases, and the dust no longer formed any letters.
Click to expand...


Disney has some perverts working in there. <_<
​
M

PERVERTS ARE PEOPLE TOO!