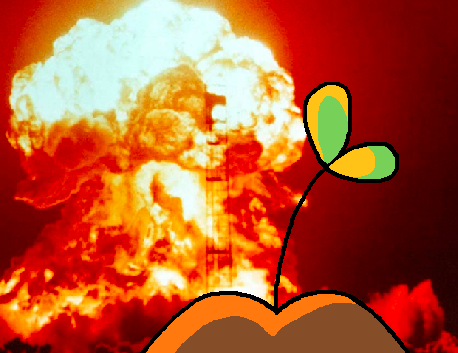 Appearance
Height: 5’1
Weight: 120lbs
Species: Robot
Eyes: Green, her left eye is black and not functional with the synthetic skin around that area being peeled away. Her eye glows in the dark because it is an LED.
Hair: Brown layered bob-cut reaching just above her shoulders. She has a fringe over her left eye to prevent things from getting into the exposed machinery, her hair curls into her cheek on the right side and she has two spikes (ahoges) in the center of her hair, her antenna.
Skin: Synthetic and pale-coloured, freckled across the nose.
Blemishes: Her left eye doesn’t work and the skin around that area has peeled off which is why her fringe covers it, her right arm is missing its forearm’s skin and some machinery. She is missing skin and machinery on the right-side of her chest, exposing her core which powers her.
Clothing: She wears a variety of blue, her main outfit is a blue hoodie that is darker blue and black along with checkered on the right side. She wears baggy gray pants and brown uggboots.

Mental
Personality: Kava is pretty blank overall, she tends to stick to being analytical of most situations and is endlessly curious due to her learning A.I.,though she doesn’t express it. It takes a great deal to get her to open up emotionally, since she was programmed lazily to have emotions but doesn’t have the means to express them properly. She is terrible at comforting people or generally showing sympathy which makes her come off as sociopathic to those who think she’s a human, she also will hurt other people physically and/or without much prompting since she sees human life as not very valuable, same with herself since she doesn’t mind injury, due to being pretty replaceable. Despite all this, she is capable of love. Though because it’s such a foreign feeling that is rare for her, she clings to whatever gives her that emotion like her artificial life depends on it. She does, however, express frustration and annoyance pretty well since she's been exposed to it endlessly.
Likes: Snakes, dogs, stars, guns, video games, anime, art, peanut butter, chocolate, forget-me-nots
Dislikes: Water, grass, people, doctors, maggots, glue guns
Alignment: Neutral Evil

Abilities
Powering up and down, scanning for heat signatures, night-vision, ability to make phone calls from mind, Memory storage, Gun skills, administering electric shocks, self-repair (if materials are provided), self-destruction (combustion, only in an emergency). Bottomless hoodie pockets (with way too many guns in them).

Backstory
K.A.V. was created by Rory Elvy and a small team in a laboratory, she was initially designed to be a robotic assassin for the government, but Rory kept adding unnecessary features and breaking her just so she could keep working on the robot. She wasn’t inspired enough and K.A.V. had been her only successful project so she was convinced to keep working on her for as long as possible, this is why the robot has so many humanoid features, just Rory wanting to hold onto her creation for longer.

One night, Rory broke part of K.A.V. which lead to the laboratory lighting on fire. Rory rushed her creation out of the lab, convinced they could both survive though she was caught when some equipment exploded. K.A.V. made it out ‘alive’, this experience caused her to add another letter to her name, K.A.V.A., Kill and Vade Alive. She was too damaged to do much more than wander the world outside her laboratory, wrapped in the lab coat of her creator.

She made her way to find some of Rory’s workmates who had ditched the roboticist after finding out she was breaking their collective project, she ended up finding Lilly, a cyborg who had pledged herself to helping Rory after she had managed to keep the cyborg’s multiple personalities under control through a chip in her brain. She ended up leaving when Rory yelled at her however, but upon seeing the damaged and wandering robot she took her in. When Lilly revealed to the robot she had a chip in her brain to keep her multiple personalities in check, K.A.V.A. saw this as an opportunity to take over the life of the girl by impersonating her, she killed the cyborg with a knife to the heart and took the chip from her brain, transporting it to her own where she learned of Lilly’s life. She proceeded to steal her identity, changing everything but her own name which she kept as Kava. Lilly’s friends and family slowly adjusted to “Lilly’s” change in personality, and Kava successfully started her new-life as a 16-year-old girl. Though, the chip is very unstable due to it being designed for multiple personalities and Kava has almost none, so occasionally she reverts to her factory state and her coding, which tells her to kill and vade.