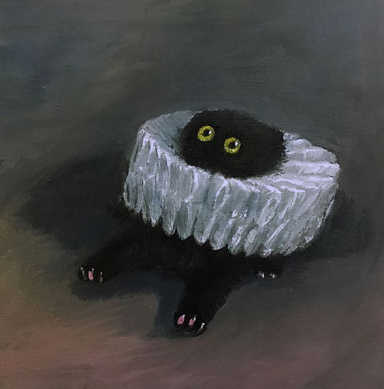 いらっしゃいませ！
My dear guest,
what will it be?

Ah... the special..
This must be your first visit!
I will tell you a secret.


Not all can see our
special menu.


You must have noticed..
you're different.

What if.. I told you
That you had a choice?

I can make it all disappear.​

THE MIRACULOUS CITY OF SAN FRANSOKYO!

> It is the world's most populous metropolis,
A spectacular combination of eastern and western cultures and enamored with Japanese-American architecture. Consisting of several cities, towns and villages, it's center is known for it's bright aesthetic and modern day technology. However, behind it's magnificence is its rising crime and suicidal rate. There is something beyond the surface.


起死回生
Tucked away and hidden in the corner of the city is Ito's Ramen Stand, a quiet and somber place- a secret jewel to those with good tastes.
But you're not really there for the food now, are you? No.. you've heard rumors. They say the owner can cure you. Save you from your misery...
You know what I'm talking about.

The demons that haunt you.
They're everywhere you go. Unlike the others, you see them- these dark and ominous creatures.
But worry not! Because it is true, this man will be your salvation. Just close your eyes... and it will all go away...


I said just close your... huh?
oh.. so you wish to stay? heh.
So you must be here for another reason.

We are hiring.
But I must warn you. This job is not for the faint of heart. You might as well consider yourself dead.
Still interested? Haha, you're crazy! But I guess you know that by now.

well then, I'd like to welcome you,
My fellow exorcist.

.......... 知らぬが仏 / / /​
Ito's ramen stand is the bridge between two worlds: the physical and the spiritual. You are a human, who - for one reason or another - can look into the realm of spirits. Despite the many complications this may have brought into your life, you try to live as an ordinary student- salary man- housewife- or whatever your role is in this mundane society. But you have a secret. A job, offered to you by Ito. Yes, the ramen guy. Somehow you have come across his shop. Maybe by accident, maybe on purpose, or maybe he called to you. It doesn't matter. Because once you are in his care, he will give you a choice.

Residents of the spiritual realm - often believed to be the source of unexplained calamities and phenomenons. These spirits range in temperament and are diverse as humans to personalities. Unseen by mortal eyes - they often slip into the physical world. They feed off the vitality and emotions of the living; however, this interaction can often become malicious, dark, and sinister.


SOUL, VITALITY, LIFE: 清祥 ​
The essence of the living - regarded as immortal. It is the spiritual state of life in the physical realm. This immaterial property correlates (though does not pertain) with the state of well being. It is volatile and may be influenced by thought and emotion.


Spirits of the spiritual realm do not possess the same vitality of the living. Instead, they possess a similar but reflective property of soul (metaphorical to ying and yang). Unlike the living - whose vitality is life itself - spirits may only strengthen theirs externally. Spirits are able to convert vitality into their own through many means. This includes the consumption of other spirits and the exposure to the vitality of souls of the living.

Beings of the physical realm with low vitality attract spirits as they are easier to manipulate and attach to. Those with high vitality normally repel spirits; however, are also targeted by greedier entities. The strength of one's vitality does not translate to spiritual sensitivity. It is exposure to the spiritual realm that increases awareness.


起死回生​
The role of an exorcist is given to those with heightened spiritual awareness. Their task is to pass on or exterminate spirits, as well as to ease and maintain the relationship between the two realms.

Ito has given you the task and abilities of an exorcist. This includes converting the vitality of spirits into strengthening your own - allowing you to increase your spiritual capabilities. However, doing this will weave your existence closer to the spiritual world.


It is with one last warning
that I urge you to reconsider.
Do not trust him.​

the art of incantation. Considered to be a 'spiritual formula' which, when vocalized, are intended to bring about a specific effect.

Rank E: Basic spells. The user is capable of subduing a lesser spirit with paralysis for the duration of vocal incantation.

Rank B: Advanced spells. The use of perish incantations - Patterns of vocalizations that inflicts damage upon the spirit's vitality until it is extinguished. Effect varies on timing and duration.

Rank A: Expert spells. The user is capable of formulating a unique spell (+1 spiritual formula).

Rank S: Master of the art. Incantations can be recited with a single word.

Rank E: Basic knowledge of (unarmed) close-combat. Harmonized between physical and spiritual being - heightening the senses. The resilience of mind and body allows for physical contact with spirits.

Rank C: Intermediate combatants. Harmonization of spirit and body allows for the use of cursed items without burdening the soul (+1 cursed item with ability).

Rank S: Master of the art. Complete harmonization allows for the release and control of one's own vitality (ie. spiritual energy). Can overpower the vitality of other spirits in the vicinity. Weakens and exorcises lesser spirits with spiritual presence.

Rank E: Basic charms. These paper charms contain the spiritual will of good luck and misfortune. Either attracts or repels lesser spirits.

Rank D: Novice charms animated through borrowing the vitality of lesser spirits. Paper, clay and wood are the primary mediums. The vitality of these charms can only temporarily be sustained.

Rank C: Intermediate charms. Allows the user to summon a single spirit to serve and protect them as their master (+1 shikigami).

Rank B: Advanced charms. These paper talisman contain the will of an elemental spirit. They are one time use (ex. a gust of wind).

Rank A: Expert charms. Allows the user to summon a second shikigami or strengthen the first spirit with an ability (+1 shikigami or ability to first shikigami).

Rank S: Master of the art. The soul is synchronized with the shikigami's. This allows the spirit to "possess" the user, thus merging the body with the form and ability of the shikigami.

is it too confusing