He doesn't have a choice

Original poster
He is yours to do with as you please, any fantasy, any fetish because he doesn't have a choice.

For whatever reason it may be, black mailed, his soul, his life, he belongs to you and is your slave to do with how you see fit.

Now for a couple of plot candles.

Idea one: for this idea I'd like for your female character to be young no older that 14. Reason being is because you are either his sister or a child of the renter he is staying with. The thinking is that she is perhaps spoiled and used to getting her way and he initially rejects her. So she gets some bad dirt on him. If she's not the sister, she threatens him with going to jail by telling her dad a lie...or the truth maybe she took advantage of him when he was drunk. So he is stuck living there and being a complete slave to her every desire.

As the sister, there are a number of ways to approach how you would want to make him yours. None of these ideas are set in stone so if you have you own ideas feel free to share.

Idea two: this is the supernatural plot line where the girl is, a ghost, vampire, werewolf, demon, lab experiment... (Someone do a very scary Ghost girl!) But your character has him by the balls literally, maybe threatening to rip them off. Drag him to hell if he doesn't do exactly what she wants if she is a demon. If you play as a demon maybe you are the paranormal activity type, behaving alot like a ghost and fucking bat shit scary. Also perhaps you are very powerful capable of forcing a gender change on him. That sounds very amusing and just wrong.

Once again just throwing out ideas. There is an idea for this one using another incest plot where the sister or cousin, I'll do cousins as well for idea one. But I did a succubus r.p where the sister was half human, half succubus slowly began turning into one after she hit a certain age.

That's all I can think of at the moment I know there is only two plots ideas but I'm sure you can possibly come up with something to strike your fancy if you don't like any of my ideas. Once again I'm allowing anything in the roleplay, NO limits. Pm me and we can began plotting ;)

If smut isn't your thing, I am wanting to do a survival horror story, and I like gender benders. I am also wanting to create a brutal Legend inspired r.p with a focus on the sea of Black tears. 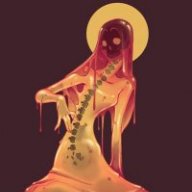