It has been five years since the Orc Wars. With the invaders driven back beyond the mountains, the heartlands are at peace.

Two cities have emerged as dominant kingdoms in the aftermath. To the north, Vonheldus, a rough and ready port where business is booming and merchants rub shoulders with criminals. And to the south, Leitania, the elder city where clerics and scholars preserve the past. Once allies against the Orcs, the two kingdoms now grow more powerful and cast wary glances at one another.

And yet, in the wilderness between the two cities, deep in the forest of Garonheim, there is new hope.

Prince Conway of Vonheldus and Princess Helena of Leitania have fallen in love. Every seventh night they slip the watch of their palace guards and meet by the tree of Gahron's Glade. Their union is forbidden, yet may be the only thing to mend the scars between the two kingdoms.

But tonight... they will be discoverd by an ancient evil... and only a handful of travellers and strangers will stand between the lovers and the doom of their kingdoms.
​
Reactions: 1 person

NOTE: Magic is possible but rare. Most people view it with superstition. Non-human races are also rare, but not entirely unknown.

Rep: A veteran of the Orc Wars saddled with the job of running the Vonheldus Watch. He misses the campaigns. After a tip-off regarding Prince Conway's weekly disappearances, Merrick has set out alone, with his horse and his trusty Orc blade (a relic of his war days), to find out what the young noble is up to.

Why in the glade?: Merrick is on foot, following the tracks of the prince.

Rep: Called the "Star of Leitania", Princess Helena is beloved for her gentle hand and quiet grace. She personally (at the worry of her parents) lent a hand to repair and support struggling villages after the Orc wars, not wanting to just sit in the castle while people were suffering. Recently it's been discovered that the Princess vanishes every seventh night. No one knows how she leaves the castle or where she goes, but she is always back before sunrise in a wonderful mood. It's a mystery!

Why in the glade?: Helena sneaks away to meet her beloved in secret. It is the place they first met.

Rep: Ando likes to think of himself as some sort of gentleman-thief, hoping one day to be the folk hero who the peasants all make private toasts to as he steals from the rich and gives to the poor, or something equally contrived. However, Ando is sadly not a very good highway bandit. It's not that he lacks skill; he's good with his weapons, acrobatic and knows how to come across as threatening when he needs to. It's just that his career as a bandit has been plagued by god-awful luck. From would-be victims turning out to be dangerous adventurer types to hiring thugs who screwed him over at a later date, Ando's not exactly blessed by the fates.

Why in the Glade?: It was going so well, too.

Ando and the band he was running with had pulled an excellent job robbing a merchant caravan of it's coin and some of it's nicer wares. He thought he was going to make a killing from this job, but a couple of the larger, more psychotic thugs got greedy and decided they wanted the lot for themselves. An argument turned into a brutal fight in which most of the band slaughtered themselves, and Ando was left running through the forest away from the aforementioned psychotic types out to make sure he did not tell anyone of their betrayal.

Running through the trees with nothing but his sword and his crossbow, he will find himself in the Glade.[/size] 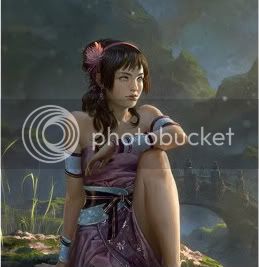 Rep: She secretly loves her prince, but knows that such a love could never be. Instead, she helps the prince hide his secret trysts with Princess Helena.


Why in the glade?: Dahlia learned of Gulbrand and Nass’s mission to kill the Princes’s love. Without a second thought, she stole a horse from the stables and is now trying to reach the glade before the mercenaries, in order to warn the royal couple.
A

Rep: The son of a dockyard whore, Nass isn't known for his compassion. He cares chiefly about getting paid and enjoys breaking people's faces. Especially uppity nobles.

Why in the glade?: The Leitanian king, growing increasingly paranoid thanks to the plethora of schemes and cabals in his realm, hired Dalibor and Ale to follow Conway after receiving reports that the prince has been seen leaving the palace on a regular basis. They are to kill Conway's contact within the Leitanian hierarchy.
P

Rep: Son of a pirate, he grew up in the docks. Tries to keep up appearances and fancies himself as a ladies man, though this usually means hanging around the many whorehouses near the shipyards. Prides himself on his moral compass, even if it doesn't point north. Cares about getting paid.

Why in the Glade?: The Leitanian king, growing increasingly paranoid thanks to the plethora of schemes and cabals in his realm, hired Ale and Dalibor to follow Conway after receiving reports that the prince has been seen leaving the palace on a regular basis. They are to kill Conway's contact within the Leitanian hierarchy.
O

Rep: Daughter to a former mercenary who married into a merchant family, Miss Saffron is sharp with negotiation as well as with bladed weapons. She looks like a demure merchant's daughter, but it's pretty much an act. She has a bracelet that is her scimitar. A magical artifact that came to her from her mother, a weapon worth more than it's weight in gold.

Why in the glade?: She has traveled ahead of the caravan to start some early negotiations in Vonheldus now that the business in Leitania is concluded. Truly though she'd rather have stayed there.

Here you go, guys! The logs!

DONATING MEMBER
FOLKLORE MEMBER
Good game, folks. Sorry for having to disappear right at the end; was about 5am my end and I was about to pass out in front of my computer.
P

Haha it's cool Grumpy, we managed to make it to 5:45am.. then I went and passed out too.

Thanks for logs Diana. I thoroughly enjoyed myself.. even if I'll probably be waking up at 3pm for weeks xD

Also I'm curious.. what would Ando's answer be to the question? 8D

Find out in the next installment.

She's not incompetent. She was just against the best of the best! *Nods sagely*

If only she wasn't so crazy/horny! She wouldn't get killed as soon as she regenerates all the time. ;_;

This is the second time the mysterious vampire cartel have plotted against the human crown.

At a guess....the human crown?