Tattered and destroyed seven-hundred years ago by what events could only be described as the Rapture, but with no heaven.
The seas ran red.
The plants withered into black.
The animals went feral.
The sun turned blood red.
The moon vanished from the sky.
The cities burned.
For one-hundred years, the world was in disarray.
No one knew why.
It happened without warning...

Driven into deep depression.
The 9 billion marked population dwindled by the million every ten years.
Hope was lost.
Suicide was frequent.
Children were being born less or eaten.
Anyone else begged to a God who wouldn't appear.
That is, until "They" came.

"They" has no name.
"They" has no presence.
"They" exists.
The people who found "They" were rewarded greatly, with riches and food.
"They" told the people; if they worshipped them, they would be rewarded.
"They" became law.
"They" rewarded the humans with a grand new home on the largest continent of the world.
"They" commanded the humans to never even peek out of the magnificent walls "They" created.
The humans agreed.
The humans feared the outside.
The first humans, the ones with the most devotion, were given a castle, and command of the rest of their flock.

The royal family was the first to be gifted with the ultimate item; the blood of "Them", the blood of what was like from Gods.
A black tube.
The family was to carry this blood, thus making them worthy of their position.
Scientists, along with the many other discoveries they had founded with the work of "Them", created a way to safely remove the human blood while transfering the godly blood.

Only those who are the closest to "Them" are allowed to step into this machine.
The richest in faith, but the most bankrupt in morality...
They are placed within the tube, two containers on either side...
One is filled, one is empty..
A mask from the floor is brought up to their face, and the world slowly melts away as tubes are stabbed into their arms from either side of the machine.
One side sucks away their human blood..
The other slowly pumps in the godly blood...
The process takes a day, a day of sleep, a day of floating mindlessly in a tube...
Until they come out.
Their eyes have been opened.
They have been Reborn.

The people with blood of black in their veins.
Those without the blood drops onto their knees and kiss the ground they walk by.
The Reborn have all the same traits; Pale, beautiful skin, Cruel yet enviable red eyes, like sparkling rubies, hair the tone of obsidian, and most importantly, the ability to percieve "Them."
To Reborn, "They" walk the halls.
Every street corner
Everywhere.
As this world now belongs to them...

None have even touched the world of outside...
Nor would they want to.
Is there even any life left?
Children are told that the entire world is dead.
Nothing left than a land of ash...
Or is there?

"They"'s greatest offender.
They swing into the cities.
Snatch children up.
And vanish utop a beast's back.
They interrupt "They"'s work, even doing such a punishable offense as to killing "Them" with their horrid "Heavenly" weapons.
Evil, evil, evil.
They reek of evil.
Any who are found are executed immediately...
The Law must stand...
The Law must survive...

1) No one is allowed to leave the walls.
Punishment: Execution

2) No one is allowed to interfere with "They"'s work of justice, loved one or not.
Punishment: Imprisonment (Life or 20-30 years)

3) No house is to not have a book of "They" and each family is to read from it every night.
Punishment: Imprisonment or Physical/Mental Torture

4) None are to say "They"'s name in vain
Punishment: Mental Torture

5) No lyrics or writings are to denounce "They" or "They"'s people
Punishment: Mental/Physical Torture or Imprisonment

6) No one is to converse with the Ashen
Punishment: Execution

7) No one of the 3rd or 4th walls are to come into the 2nd or 1rst
Punishment: Imprisonment

8) No one not of the Reborn is to falsify the words of "They"
Punishment: Imprisonment or Execution by cutting of tongue and suffocation

9) No one is to kill "They"'s people
Punishment: Execution

10) No one is to question "They"'s existence
Punishment: Imprisonment

11) No one is to slaughter the animals "They" brought without permission from the king as to what species "They" allows to be slaughtered.
Punishment: Execution

"They": The supposed god of the people

Ashen: People who invade the walls and take children from the streets. They also found a way to kill or weaken "They". They all are either young adults or teenagers.

The Rebirth Machine: Where Reborn are created

Wall Regina: The inner-most wall. Hosts only the Reborn and descendants of the original worshippers. It takes the appearance of a regal old English style mixed with modern city-fare.

Wall Mary: The second inner-most wall. Hosts mostly Reborn, but strong believers with thick wallets are also in residence. The city takes the appearance much of Tokyo mixed with several large cities.

Wall Ruth: The second outer-most wall. Hosts both strong and moderately strong believers. It's more of a middle class compared to everything else. It's appearance holds the standard sub-urban style along with streams, forests, and even rare species of animals.

Wall Erin: The outer-most wall. The entire place is mostly rural and full of poor people who barely believe in or don't believe in "They" at all. Most, if not all of the buildings look ready to collapse or were purposefully designed to look rough. The wall is mostly full of forests and animals. This wall is mostly where all the food comes from, and is mostly watched for rebels.

Reborn are essentially humans who apparently carry the blood of "They".
Reborn can only be created, not born out of a woman. For some strange reason, the baby is born with all of a Reborn's physical traits, but they bear red, human blood.
It takes a newly created Reborn a week to properly adjust to their new body. It's essencially putting your brain in a robot except with your nerves and organs intact; For the entire week, they are constantly struck with pains and strange images which people refer to as Enlightenment, which completely drives them mad, but when the week is over, they appear completely sane.
Only one Reborn can bear a child with the blood of "They"; The Queen Carrier. It is thought that the first female worshipper had been given a different type of blood, or even a parasite of sorts, to be able to act as a "ruler" to those who have the blood. Only females carry it, and the Queen can only have female children. Each time the Queen is bearing a child, it's as if something removes itself from the mother and works it's way into the unborn infant. It is untrackable so far, and none dared to attempt surgery to see what it was, because if the current carrier is dead, all the Reborn will go mad and kill each other or themselves in a timeframe of 24 hours after death, as "They" had warned. Reborns instinctually bow to and obey the current carrier, almost like zombies.
Reborn are gifted with certain abilities after their conversion is complete. They are able to percieve some type of physical form of "They", though are unable to talk to them since "They" does not answer back, or seem to.
Reborn also have enhanced human senses, bizarre strength, and enhanced intellgience.
The Queen Carrier's abilities are the same, but the thing is that no one knows of any other abilities she has other than being able to control a crowd of Reborn.

Espers; What are they?
Espers are the species that have replaced animals on Earth. They come in millions of shapes and sizes, though being very similar to animals that had existed.
That is, if animals had strange, almost magical abilities.
D

Seems really interesting and fleshed out though id like to know more about the Ashen.

If i was to be part of an RP I would be more interested in playing a survivor on the outside if you would permit such, i would be thinking along the lines of a soldier/scavenger.

What would be the setting for people pre-fallen world, the past for us if it was now, today's technology or future technology.

obviously the picture would be my idea of a soldier having to survive in a desolate wilderness scavenging for supplies in a hostile landscape though its shamelessly stolen from hellgate london concept art :P though it might not fit with your timeline technology wise.

EDIT: though it might fit your Ashen possibly if there are no "humans" not associated with the reborn/humans and ashen. 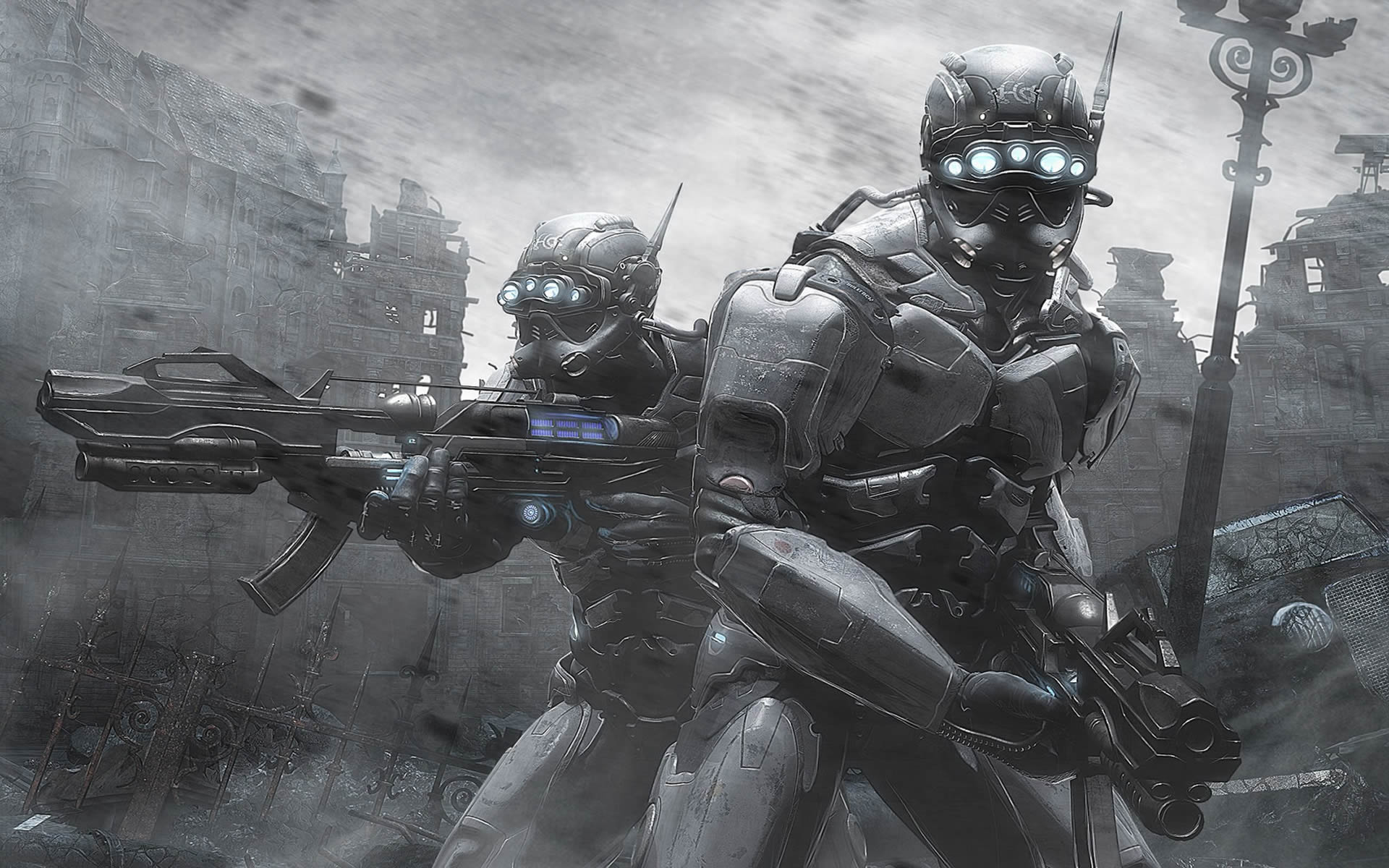 Deathwatch101 said:
Seems really interesting and fleshed out though id like to know more about the Ashen.

If i was to be part of an RP I would be more interested in playing a survivor on the outside if you would permit such, i would be thinking along the lines of a soldier/scavenger.

What would be the setting for people pre-fallen world, the past for us if it was now, today's technology or future technology.

obviously the picture would be my idea of a soldier having to survive in a desolate wilderness scavenging for supplies in a hostile landscape though its shamelessly stolen from hellgate london concept art :P though it might not fit with your timeline technology wise.

EDIT: though it might fit your Ashen possibly if there are no "humans" not associated with the reborn/humans and ashen.

Sorry but this soldier idea isn't going to work.
One; Ashen have not been exposed to modern technology, or much of it at all. They work with a certain type of Esper in place of that.
Two; It's impossible for your character to be out on their own or have no knowledge of the Ashen or the walls. Ashen are basically the people who took no part in the insanity and leaned away towards nature that started to develop.

I only didn't say much about Ashen because they're suppose to be a MYSTERY for right now. No one in the walls know much about them, and you will be playing someone from within the walls. Reborn or not.
Again, along with that, how the outside world is now is a MYSTERY. No one knows if it's still a wasteland or something else happened out there, or if it even still exists.
It's future technology, but only those within the wall have created it, and only people from the 1rst and 2nd walls have access to most of it. 4th is just pure luck if someone dropped it or lost it while visiting.
D

Ahh ok that clarifys it a bit more it didn't seem very certain what role you were wanting people to play, ill have to think about it, I misunderstood when you listed the Reborn, The Outside and The Ashen all under each other.
Show hidden low quality content