Catch me if you can (yuri rp)

[tabs][tab=Overview]There's a new mysterious girl in Romiku High and she has everyone talking. With the face of a model, perfect pale skin, and a hourglass figure that makes her look as if she were a Victoria Secret model, her beauty had all the students craving her attention. However, Hisoka has a secret - she's a vampire.

_____ however becomes fascinated with Hisoka after she was saved one night from falling off her roof, Hisoka denies the night ever happened, but the fact Hisoka was no where near ___ when she slipped from the roof and last ____ checked, Humans don't jump up two stories in the air then land on their feet as if nothing happened, made her believe the lass had something to hide.

Though ____ tries to talk to Hisoka about the night she is met with the same response. "Hehe ____ it was just a dream, besides how could i make it from my house a crossed town to your house when i dont even know where you live?" Hisoka would always tell ____ this then give her, her worlds famous smile completed with a giggle.

Mark, ____'s best friend, always teases her about having a crush on Hisoka, and never truly believes her stories about the new girl. That is until bodies started to show up around town with the cause of death noted Body drained by two puncture wounds to the neck. Of course it was Mark's idea that Hisoka might be a vamp, but ____ took his joke a little too seriously and decided one day to call Hisoka out on it. Following the new girl out into the forest by the school ____ never expected to find out what she did that afternoon. 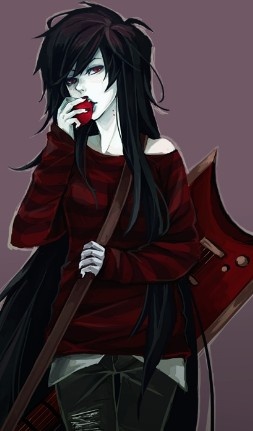 name: Hisoka Miharu
age: her true age is 116, but her fake age is 17
personality:
-cold
-sweet
-lowkey
-tomboyish
-mature....when she wants to be...
-almost like Marceline from adventure time
Bio:
Hisoka, meaning secret in Japanese, has always been simply a secret. When she was young her mother was attacked by a rouge vampire and almost died, but thankfully was saved by Jack, Hisoka's long passed step father. Although Jack saved her, he couldn't get all the serum out of Hisoka's mother, Samantha, and became changed.
Years later people in Hisoka's village started to question Sam about why she and her new husband never seemed to look any older. Panicking Sam and Jack packed everything that night and ran, yes litterly ran, from Wales, Europe all the way to Oregon, USA. Unknowing that the council required all vamps to check in with them before leaving anywhere, Sam and Jack shortly became known as rouges, which has carried out to Jack dying well trying to take on three council members in order for Sam and Hisoka to escape, to years later a council member discovering Sam's hiding place and raided the house. When this occurred Hisoka was already 17 and unaware of the issues surrounding her. Sam had told her Jack was jumped and murdered one night coming home from work, and Sam's job was the reason for them moving so much. Of course only being told this her whole live, it was all Hisoka had ever known. The night of the raid Sam knew good and well that it would be the last time with her daughter, so without hesitation she turned Hisoka into a vampire and sent her to a fellow vamp named William, who had agreed decades ago that if anything were to happen that required him to train the lass, he would explain everything to Hisoka then teach her the ways of being a vampire.
Now about 116 years later and being cursed with the looks of a 17 year old Hisoka was on her own, traveling the world and repeating high school, year after year. Though shortly after her arrival at Rumiko High, Hisoka was found out by a spy in the high school and has to spend her life like her parents, running and fighting for a stupid mistake.[/tab][/tabs]
Last edited by a moderator: Apr 22, 2016
D

Daspro said:
Then allow me to be the ketchup ( Beware there are plenty cringey pick up lines like this xD )
Click to expand...

I dont bite but I heard you might, ao let me feed your appetite ;)

Kuroda said:
Oh I have one!

I dont bite but I heard you might, ao let me feed your appetite ;)

That rhymed ( bite , might , appetite ) , you amaze me still ! I assure you that I'm a much better ketchup if you still have any doubts let me brawl with your current ketchup for your love which I seek with utmost importance !
K